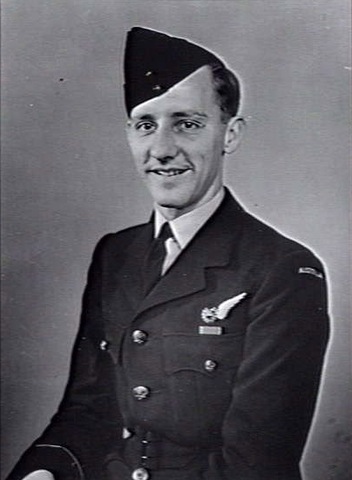 Robert George Thomas Kellow was born in Newcastle, New South Wales, Australia on 13 December 1916, the son of George and Violet Kellow. He went to Newcastle High School, the same school as fellow Dambuster Jack Leggo, the navigator in Mick Martin’s AJ-P. He worked as a shop assistant after leaving school, but when war came he enlisted in the RAAF.
He was selected to train as a wireless operator/air gunner and was sent to Canada for training. From there, he was posted to the United Kingdom, and arrived in January 1942.
After further training he was crewed up with pilot Les Knight and then posted to 50 Squadron. He completed some 25 operations with Knight before the whole crew were offered the chance to transfer to the new secret squadron being set up at Scampton. Shortly before the transfer came about, he was recommended for a DFM and then commissioned. (The DFM wouldn’t actually be awarded until June 1943.)
There was no doubt in Kellow’s mind about the transfer, as he explained after the war: ‘The offer presented to us sounded interesting and with our faith in each member’s ability we made up our minds there and then that we would accept the offer and move over as a crew to this new squadron.’
On the flight to the dams, Kellow was watching from AJ-N’s astrodome when he had the unfortunate experience in witnessing the last moments of Bill Astell and his crew, damaged by flak near Dorsten and crashing in flames a few minutes later. He then had to wait more than an hour while the Möhne Dam was destroyed before they reached the Eder and he was told to start up the spinning mechanism for AJ-N’s mine.
Following the successful attack, Kellow was understandably preoccupied while Knight and Grayston pulled AJ-N up and over the surrounding hills, and his message confirming the drop – ‘Goner 710B’ – was sent six minutes after the message ‘Dinghy’, denoting a breach of the Eder, had been transmitted by Bob Hutchison, in Gibson’s aircraft.
Knight, Kellow and the rest of the crew were not back in action until September, in the disastrous attack on the Dortmund Ems Canal.
Five of the seven crew who baled out of Knight’s aircraft would eventually get back to England, helped by Dutch and French Resistance networks and couriers. Hobday and Sutherland had been reunited and travelled as a pair, but Kellow made the six week journey to Spain on his own a day or so ahead of them, and arrived back in England in December 1943. Like all those who had made the perilous return trip he was not allowed to fly over enemy territory again, to protect the networks he had used to evade capture, so he returned to Australia in May 1944.
He served in RAAF 37 Squadron for the remainder of the war, mainly in Australia, but including a deployment to New Guinea where he flew in a Lockheed Lodestar.

In April 1946 Kellow returned to Newcastle, NSW, after being discharged from the RAAF, with a glowing report from his Commanding Officer who described him as showing ‘great possibilities for good leadership’, and  ‘one of the most liked and well known’ and  ‘invaluable’ members of the Squadron.
He returned to his job as a shop assistant in Australia, and in 1946 married Doreen Smith, a Canadian who he had met while training there in 1941. By 1952, they had two children and the whole family moved to Winnipeg, Canada, where Kellow worked for the Manitoba Power Commission.
He travelled back to the UK for a number of 617 Squadron anniversary events, and paid his respects at Les Knight’s grave in Holland.
Bob Kellow died in Winnipeg on 12 February 1988, and is buried in the city’s Brookside Cemetery.
[Thanks to Graeme Jensen for help with this article.]