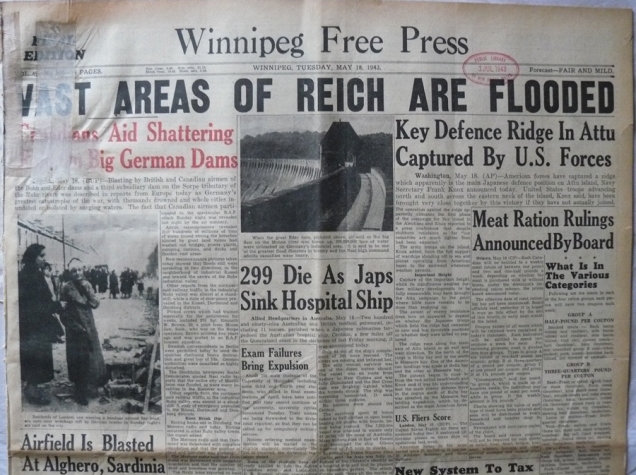 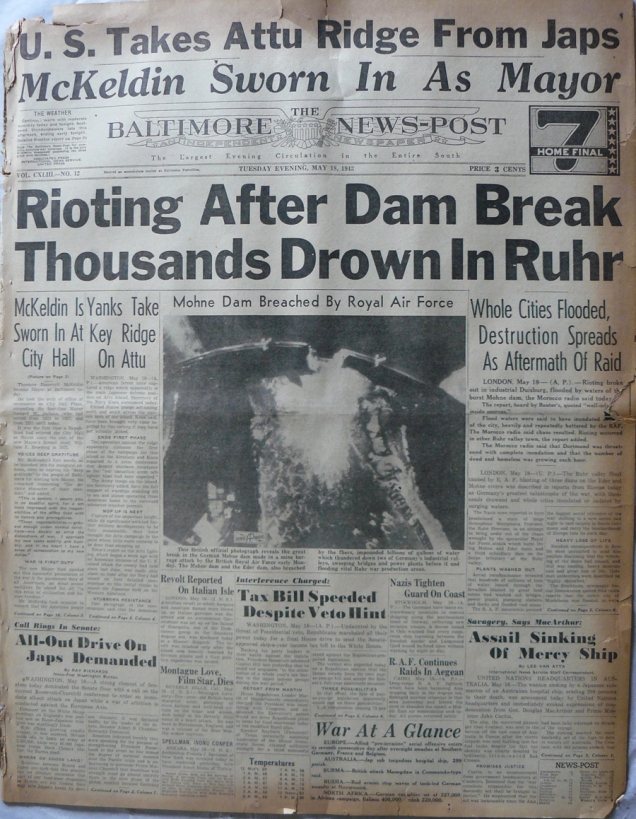 My friend Dominic Howard sent me these pictures a while back and I have been so busy I forgot to post them on the blog! Better late than never, so here they are. They are original editions of the Winnipeg Free Press and Baltimore News-Post newspapers from May 1943, containing the first reports of the Dams Raid. You can see high resolution scans of both newspapers in Dom’s Photobucket pages — here for Winnipeg and here for Baltimore.

Dom is the great nephew of Cyril Anderson, the pilot of AJ-Y on the Dams Raid. Cyril had been transferred from 49 Squadron to 617 Squadron on 25 March, along with his crew. On the raid, his aircraft AJ-Y was part of the third wave, the mobile reserve, and was eventually dispatched to the Sorpe Dam. He encountered heavy flak en route and had a problem with a malfunctioning rear gun. So at 0310, with dawn approaching and the valleys filling with mist, he turned back while still short of the target. He landed at Scampton at 0530, with his mine still on board.

Guy Gibson was not pleased with the fact that he had returned without dropping the mine and, taking no notice of the other extenuating circumstances, sent Cyril and his crew back to 49 Squadron.  Many researchers now feel that Gibson was unfair on Cyril, and that he was poorly treated by being removed from 617 Squadron.

Cyril and his crew completed another 15 operations in 49 Squadron until on a raid on Mannheim on 23/24 September 1943 they were shot down by a German night fighter and killed. The night fighter pilot was Lt Heinz Grimm, who was himself killed a few weeks later.

Dominic has an account of this final operation to Mannheim, and his trip to Germany to investigate the crash on his website, www.lancasterbombers.com

Once upon a time the Hollywood magazine Variety was regarded as the voice of show business, regularly breaking dozens of stories in a famously sensationalist style which used a language all its own: 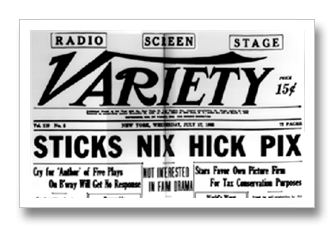 Now, it seems, it employs ‘reporters’ who are reduced to reading film directors’ Facebook pages and regurgitating material without any pre-existing knowledge. Last week, Dave McNary fearlessly exposed the brand new (to him) news that:

Peter Jackson has tapped British thesp Stephen Fry to play the Master of Laketown in “The Hobbit” and revealed on his Facebook page that he and Fry are collaborating on “Dambusters,” a WWII actioner that has been in development since 2006.

“I’ve known Stephen for several years, and we’re developing a ‘Dambusters’ movie together,” Jackson said in his Facebook post. “In addition to his writing skills, he’s a terrific actor and will create a very memorable Master for us.”

If Mr McNary had bothered to check on Google (it’s called a “search engine”, old boy) he would have come across a few thousand references to this ‘actioner’ project, going back several years: 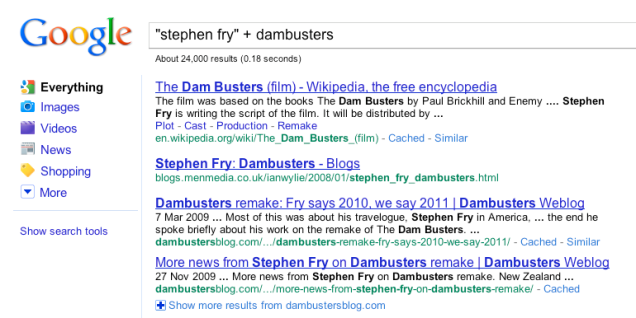 Modesty forbids me mentioning the name of the blog which ranks third and fourth in these search results.

Suffice it to say that Mr Fry’s involvement with the film has been around so long that he even wrote about it in the latest instalment of his autobiography. And that came out in September last year.

If you enjoyed the ‘bouncing bomb’ documentary on Channel 4 earlier this month then you will be pleased to know that the engineers involved, Hugh Hunt and Hilary Costello, will be speaking at the Cheltenham Science Festival on Sunday 12 June. Details here. Apparently it will cover extra material that didn’t appear in the documentary itself, so it could be well worth the six quid it will cost you to attend!

Monday 16 May is the 68th anniversary of the Dams Raid. And what better way to mark the day than with a nice plate of bread and cheese. This would seem to fit the bill nicely: 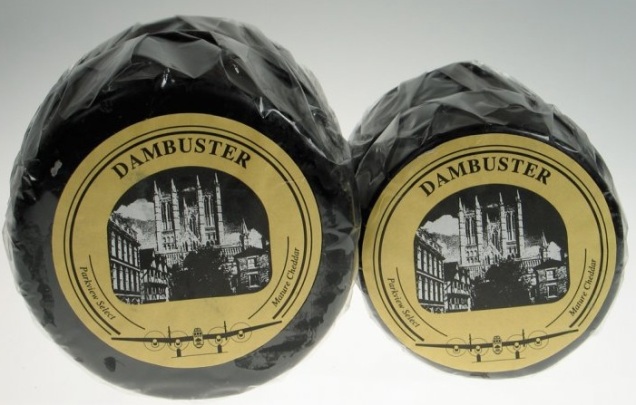 I wonder – if you bowled one out over a lake and applied a bit of back spin, would it bounce?

If this is your first visit to the only Dambusters blog on the interwebnet, you are very welcome. You may well have arrived here after watching the Channel 4 documentary on Monday 2 May, in which modern engineers rebuilt a working ‘bouncing bomb’. This was previewed in various articles, one of which you can see here from the Daily Telegraph.
This blog tries to keep people up to date with Dambusters news from around the world. And because WordPress tells me the search questions which people have asked to arrive at the blog I know that there are two subjects which are likely to be uppermost in your mind.

1. What is happening to the remake of The Dam Busters?
Back in 2006 the producer Peter Jackson announced that he was to remake the classic 1955 film, The Dam Busters. A director, Christian Rivers, was assigned to the project, and a script was commissioned from British national treasure Stephen Fry. Jackson and several other sources have said several times that the project is still ongoing. The script is finished, at least one full size model Lancaster has been built, and test filming has been undertaken. But the Jackson team, based in his native New Zealand, are currently preoccupied with several other projects, notably The Hobbit, and it is now quite obvious that The Dam Busters is lower down the schedule than they have let on.

2. How many of the original Dam Busters are still alive?
I am happy to report that four of the aircrew who took part in the raid in May 1943 are alive and well. One, Grant MacDonald, who lives in Vancouver, Canada, visited the Windfall Films/Channel 4 team while they were making the documentary last October. He was the rear gunner in Ken Brown’s crew in AJ-F. Also living in Canada is Fred Sutherland, front gunner in the crew which dropped the bomb which broke the Eder Dam, Les Knight’s AJ-N. The only pilot still with us is Les Munro, who captained AJ-W on the raid. He lives in his native New Zealand, and has been reported as being involved in the Jackson remake project as a technical advisor. And finally, of course, there is George (“Johnny”) Johnson, bomb aimer in Joe McCarthy’s AJ-T, who lives in Devon and who was interviewed for the C4 documentary..

My own involvement in the Dambusters story is that my uncle, David Maltby, was the pilot of AJ-J on the raid, and dropped the fifth ‘bouncing bomb’ which made the final breach in the Möhne Dam. He and his entire crew were killed four months later, returning from an aborted attack on the Dortmund Ems Canal. David is buried in St Andrew’s Church in Wickhambreaux, Kent. You can read more about David and his crew on my other website, or in my book, Breaking the Dams, which was published in May 2008.