Alex Bateman, who was jailed for two years in February for stealing the logbook of Canadian Dams Raid veteran John Fraser, has been ordered to pay £12,500 to Fraser’s widow Doris. Giving the ruling in a compensation hearing in Wood Green Crown Court Judge John Dodd QC said that, even so,  “no financial value could possibly compensate the family” for the theft.
Bateman had claimed during the trial that he had received the book as a gift, and had forged a Christmas card from Doris Fraser to back this up. He claimed that the book had later been stolen from his home. Today in court he still maintained that he last saw the logbook in early 2003, and did not know its current whereabouts.
Judge Dodd went on to say that the theft case had “engaged the emotions in a way that’s unusual”. He added: “It is absolutely clear that no financial value can possibly compensate the family, who have lost this connection with a hero. That’s one of the sad things that no order I make can possibly restore or make good that loss and that sense of betrayal frankly.” 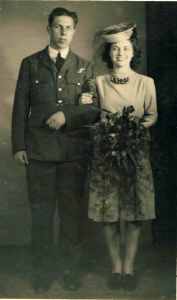 The judge said that he would do all he can “to see that the family receive some appropriate measure, some modest measure of financial compensation” in addition to the value of the book.
Adjourning the case to a date to be fixed, the Judge added: “Mr Bateman has the opportunity to do the honourable thing. I’m sure he knows what I mean by that. I’m sure you all know what I mean by that.”
Shere Fraser, John Fraser’s daughter, commented after the case, speaking from her home in the USA: “There is no outcome from these hearings that can compensate the years of pain and anguish we have felt over the loss of my father’s precious record of his wartime courage, his RCAF log book. Losing my father in a tragic plane crash in my childhood devastated my family. Years later, we are still grieving his loss. Never did our family expect that a heartless criminal would rob us of his legacy of courage. Today’s hearing was another painful reminder that no money will ever replace what he has stolen. Now and forever, I will never give up hope for the recovery of my father’s log book. I am my father’s daughter.”

Short notice, I know, but if you are in the Watford area tomorrow (Saturday 9 September) you might like to visit this important site. This is the model dam which was built in the grounds of the Building Research Establishment (BRE) in Garston, near Watford. The construction took place with great secrecy in the winter of 1940–41, two years before the Dams Raid actually took place. On their own initiative, BRE scientists and their colleagues at the Road Research Laboratory (RRL) in Harmondsworth had been discussing possible ways of attacking the German dams before the involvement of Barnes Wallis.

Wallis was put in touch with the BRE and RRL team, and it was agreed to build a 1/50 scale model of the Möhne Dam on a secluded part of the Garston site. The very informative article on the BRE website tells the story:

The model, which survives today at the centre of the now enlarged BRE site, was built in seven weeks between November 1940 and January 1941. Temperature records from the time show that the winter was very cold, with daytime temperatures close to or below freezing over much of this period, and photographs show snow on the ground.

To conceal its identity, the model was referred to as ‘Weir No. 1.’ in the records. These show that work at the site started on Monday 25 November 1940, when the area was excavated to widen and deepen the stream, and to prepare an area for the concrete base of the dam. The foundation concrete was poured on 29 November, and the two towers of the dam were cast in situ the following Monday. The side wings [were] completed shortly after this. To allow the model to be built across the stream, a pipe was placed in the foundation to carry the water beneath the centre section during its construction.

Having built the model, the scientists then proceeded to try and blow it up. The dam was badly damaged during these tests, and further experiments were carried out elsewhere. However, because it was repaired in the 1960s this is probably the only place where Dams Raid test infrastructure remains in place and viewable by the general public. As such, it was scheduled by English Heritage in 2002 as being not only of ‘national but also international importance’. (In later tests in May 1942 the Nant-y-Gro dam in Wales was also blown up, but it is still viewable in its damaged state.)

To get a flavour of what is also viewable at Garston, read this account of last year’s open day by Diamond Geezer. Hat tip to him for the post alerting me to this event, and also for use of the photograph above.

Two more items which are claimed to have belonged to Flt Lt David Maltby at the time of the Dams Raid are up for sale at an auction which closes this coming Sunday, 10 September. Like several other items previously sold by the same auctioneer, these are the property of the same collector who acquired them all from Hydneye House School when it closed in the early 1970s. Hydneye House School – a boys’ preparatory school – had been owned and run by David Maltby’s parents, Ettrick and Aileen Maltby, until they retired in 1955.
As with the earlier items sold, neither has ever been seen before by current members of the Maltby family, who cannot therefore provide any provenance for them.