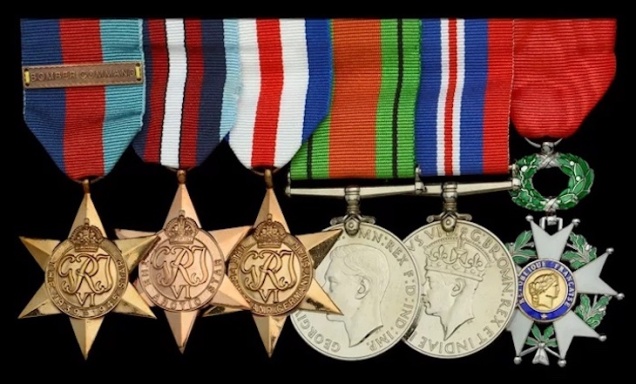 Good news in this article from the Antiques Trade Gazette.

The Goodman family and the RAF Museum have agreed that Sqn Ldr Lawrence “Benny” Goodman’s medals, logbook, flying jacket and other artefacts are to be purchased by the RAF Museum, and will go on display there in due course.

Squadron Leader Goodman’s son, Robert, said: “I’m very pleased that my father’s medals and artefacts will be purchased by the RAF Museum with the proceeds of the sale benefiting the Royal Air Force No 617 Squadron Association. I’m sure that he would have been thrilled that his legacy will be kept alive for the nation and shared with the world at the RAF Museum while giving back to No 617 Squadron, with which he fought so valiantly during the Second World War.”
Dr Peter Johnston, head of collections and research, the RAF Museum, said: “The museum is delighted to have acquired this wonderful piece of history which enables us to tell a unique part of the RAF story.
“‘Benny’ Goodman had a fantastic relationship with the museum and was featured in the Jewish ‘Hidden Heroes’ project that was launched in 2018. We are planning that his medals and log book will go on display in the Bomber Command Hall as part of its redevelopment in 2023.”

Good news for everyone concerned!

Thanks to Ray Hepner for the tip.

Sqn Ldr Lawrence “Benny” Goodman was the last British wartime 617 Squadron pilot when he died last July at the ripe old age of 100. He was honoured yesterday with a memorial service at the RAF church, St Clement Danes in Strand, London. There is a report on the services TV station, Forces.net, which you can find here, with contributions from various attendees and his son, Robert Goodman. The good news conveyed by Robert in the film is that Benny’s medals and logbook will shortly go on display at the RAF Museum in Hendon. 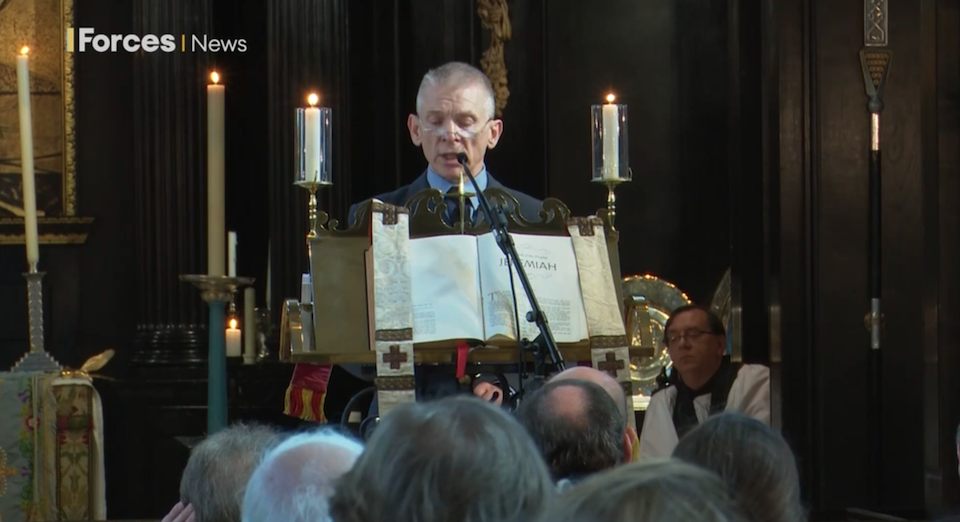 Wg Cdr Andrew Walters, chair of the 617 Squadron Association, conducting a reading during the service

To mark what has been a sad few days for the friends and families of RAF 617 Squadron, a tribute to the late Benny Goodman will be broadcast on Radio 4’s Last Word programme on Friday 23 July. In it, presenter Matthew Bannister will interview the 617 Squadron Association historian Dr Robert Owen, who was a friend and colleague of Benny’s for more than 40 years.

As others have said this week, Benny was not only a hero who was at special risk as a Jewish pilot flying wartime missions over Germany, he was a true gentleman and a lovely, rounded human being. Those who met him were fortunate to enjoy his company for so many years.

Last Word will go out at 4.00pm tomorrow, Friday 23 July, and is repeated on Sunday at 8.30pm. It will also be on BBC Sounds thereafter, which should be available outside the UK for his many friends in other countries. See this link for details. 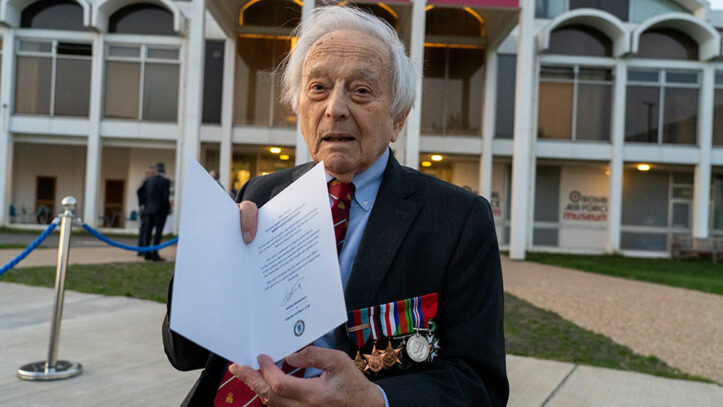 Benny Goodman’s death earlier this week has been covered on a number of news websites, amongst whom are the following:

The Times (behind paywall)

I’ve been through all those which are available to me.

The Gold Star for effort goes to the Telegraph, whose text had no obvious errors.

The saddest contribution to the Roll of Shame was probably that of the Express. This is the rather pathetic wreck of a newspaper which at one time dominated Fleet Street with a vast raftful of reporters. Its writers included legends such as James Cameron and Sefton Delmer, its editors were the likes of Arthur Christiansen and Bob Edwards. From the 1930s to the 1960s it prided itself on its coverage and circulation. The modern day writer who fills the legends’ shoes, Defence Editor John Ingham, wrote just 94 words in his contribution and compounded this paucity by including a photograph purporting to be Benny with his crew but which is, in fact, a photograph taken in 1942 of a crew from No 9 Squadron (published on this blog on 29 March 2011).

If you come across any more obituaries please let me know. 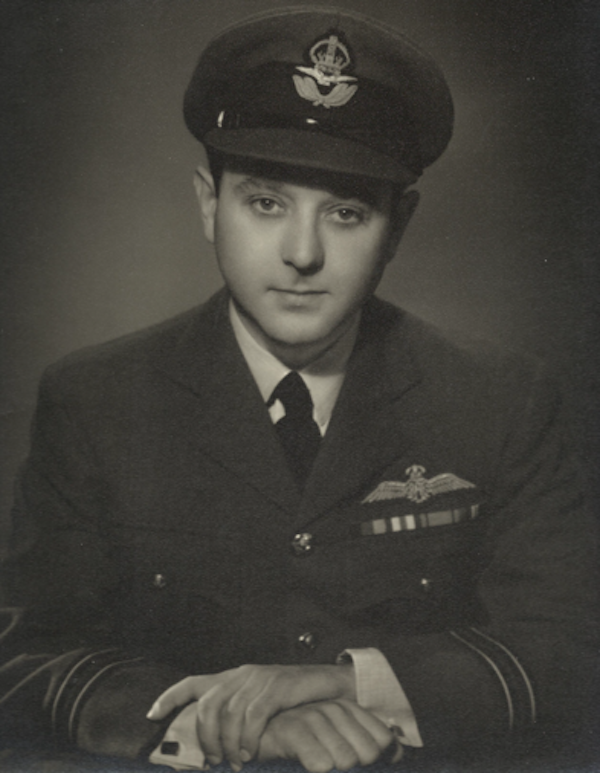 I am sorry to have to report the death earlier today at the age of 100 of Sqn Ldr Lawrence Seymour (“Benny”) Goodman, the last surviving British wartime pilot in 617 Squadron.

Benny was well known for his service in 617 Squadron at the latter end of the war, but in fact he had volunteered to join the RAF at the outbreak of war in 1939 aged 18 and was mustered as a pilot in early 1940.

Benny was born in London on 24 September 1920, and educated at Herne Bay College in Kent. After enrolling in an electrical engineering course, he then worked in his father’s film and advertising business. When the war began he joined the RAF and served as a ground-based gunner before being selected for aircrew training. After initial flying training in England, he was then shipped off to Canada for final training, receiving his flying badge in April 1942. He was retained in Canada for a while (to his frustration) as a flying instructor, part of the Commonwealth Air Training Plan but at last returned to the UK in late 1942, although he was lucky to survive his ship being torpedoed mid-Atlantic.

He then undertook further heavy bomber training, where he displayed superlative flying skills. This led to him being selected as one of the few ab initio pilots for 617 Squadron, a special initiative by the AOC of 5 Group, Air Vice Marshal Sir Ralph Cochrane, and he joined the squadron in August 1944.

After a “second dickey” trip on 18 August, his first operation with his own crew was an attack on Brest on 27 August. He went on to complete 30 operational missions before the cessation of hostilities, dropping Tallboy and Grand Slam bombs on numerous targets. These included the attack on the battleship Tirpitz on 29 October 1944 and on Hitler’s “Eagle’s nest”, 617 Squadron’s final operation of the war on 25 April 1945.

After compulsory demobbing in 1945, Benny joined 604 Squadron, Auxiliary Air Force, flying Spitfire XVIs from RAF Hendon as a reservist. He rejoined the RAF in 1949 during the Berlin Airlift, initially flying Hastings in Transport Command and finally retiring in 1963 after a tour on Canberra PR7s.

During his 21 years of service, he flew over 3,500 hours in 22 different aircraft types. He continued to fly as a private pilot until he was over 90 years old.

After his retirement, Benny was a great supporter of reconciliation with Germany, becoming a long-standing friend of the city of Arnsberg, whose viaduct he had collapsed on 19 March 1945 with a Grand Slam bomb. He also promoted diversity through the RAF Museum’s Hidden Heroes programme and contributed to the RAF’s oral history. He was also a longtime supporter of the 617 Squadron Association, attending the last dinners held in 2019.

Benny is survived by his son.

Funeral arrangements are yet to be confirmed, but it is hoped that there will be a memorial service at the Central Church of the RAF, St Clement Danes, in a few months’ time. 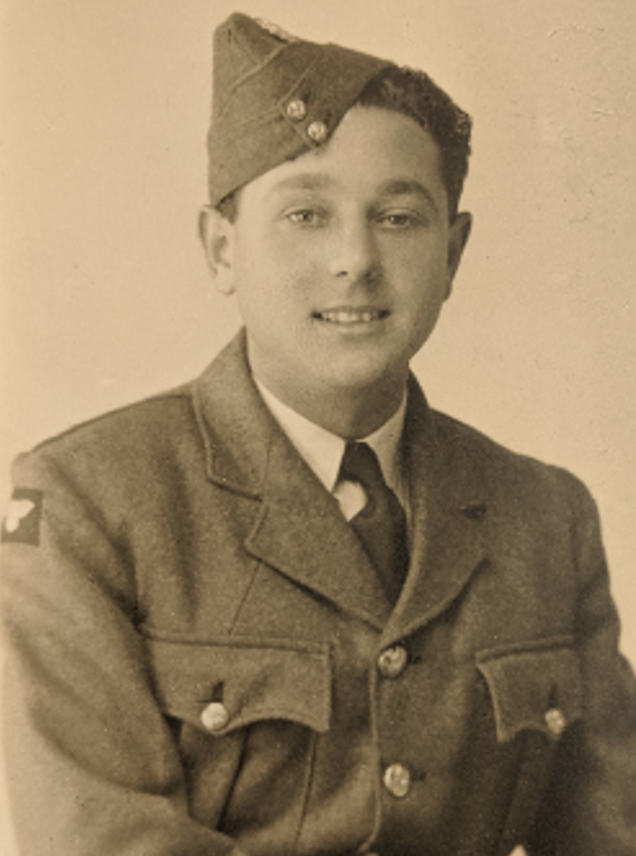 Sqn Ldr Lawrence (“Benny”) Goodman celebrates his 100th birthday today, 24 September 2020. He is well known for his service in 617 Squadron at the latter end of the war, but in fact he had volunteered to join the RAF at the outbreak of war in 1939 aged 18 and was mustered as a pilot in early 1940. After flying training in the UK, he was selected to be a Service Flying Training Instructor in Canada as part of the Commonwealth Air Training Plan.

He returned to the UK in late 1942, his ship having been torpedoed mid-Atlantic. As a result of his superlative flying skills, he was selected as one of the few ab initio pilots for 617 Sqn, where he completed 30 operational missions before the cessation of hostilities, dropping Tallboy and Grand Slam bombs on numerous targets, including the battleship Tirpitz and Hitler’s ‘Eagle’s nest’.

After compulsory demobbing in 1945, Benny joined 604 Squadron, Auxiliary Air Force, flying Spitfire XVIs from RAF Hendon as a reservist. He re-joined the RAF in 1949 during the Berlin Airlift, initially flying Hastings in Transport command and finally retiring in 1963 after a tour on Canberra PR7s.

During his 21 years of service, he flew over 3,500 hours in 22 different aircraft types. He continued to fly as a private pilot until he was over 90 years old.

Since his retirement, Benny has been a great supporter of reconciliation with Germany, becoming a long-standing friend of the city of Arnsberg, whose viaduct he collapsed with a Grand Slam bomb. He has also promoted diversity through the RAF Museum’s Hidden Heroes programme and contributing to the RAF’s oral history. And, of course, he has been the greatest supporter of the 617 Sqn Association.

Benny was presented with a birthday cake and a greetings card by the Chief of the Air Staff at the RAF Museum last week, as shown above.

[Thanks to 617 Sqn Association] 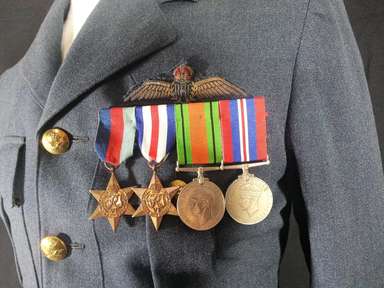 Several items of wartime RAF uniform, some supposedly once owned by 617 Squadron veteran Flt Lt (later Sqn Ldr) Lawrence ‘Benny’ Goodman, were recently sold on Ebay for a total of about £1065. These were the items listed:

The seller claimed that:

Back in 2009, I acquired a large military/aviation collection from a retired private collector. This Service Mess Dress was among the collection and originally belonged to one incredible man … The story goes that he bought these from a dealer that was specialist [sic] in abandoned / unclaimed storage units.

However, Benny Goodman, who is now 96 and who recently attended the 617 Squadron Association annual dinner, is adamant that this uniform never belonged to him. And he points out that he still has his medals (indeed he wore them at the dinner).
Another piece of clothing is this battledress uniform, which does not appear to have any nametags: 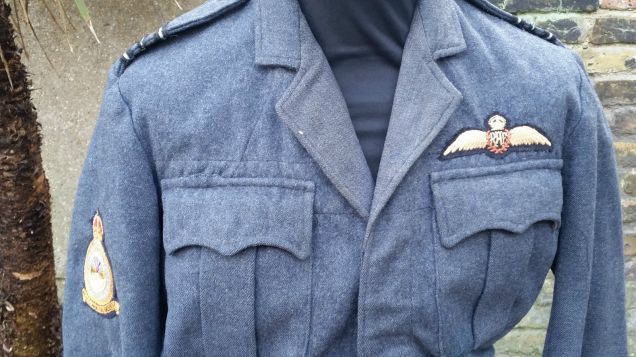 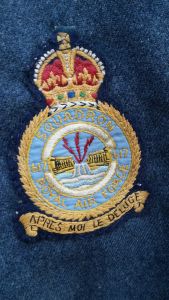 Although this may be a real Squadron Leader’s Second World War battledress, it would seem to be enhanced by the addition of a 617 Squadron badge on its sleeve. Most experts in RAF militaria would say that it was very unusual for a real pilot to have his squadron crest on his sleeve.
Although there is no claim that this belonged to Benny Goodman, it should be noted that when he finished his tour of operations in 617 Squadron, he was still a Flight Lieutenant. He did not achive the higher rank until his post-war service.
Two more items which did supposedly belong to Benny were these “service wallets”: 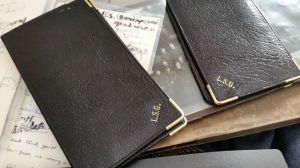 First of all, there was no such thing in the wartime RAF as a “service wallet”, for officers or other ranks. Second, Benny also denies having ever owned these. Indeed it is not clear why he would even possess two identical, unused wallets. It should be noted that similar wallets conveniently marked with the initials of 617 Squadron officers have also occasionally surfaced on Ebay.
Apart from the wallets, all the items in the sale would seem to be genuine Second World War material. In some, the value has been enhanced by adding the name of a known veteran to the nametags. The seller may themself not have been involved in this process, but at the very least they should have tried to ascertain whether or not these items definitely belonged to Benny Goodman before making a tidy profit.
Once again, a strict warning should be given to anyone thinking of purchasing similar material on Ebay: be very careful what you buy, and look for direct provenance.