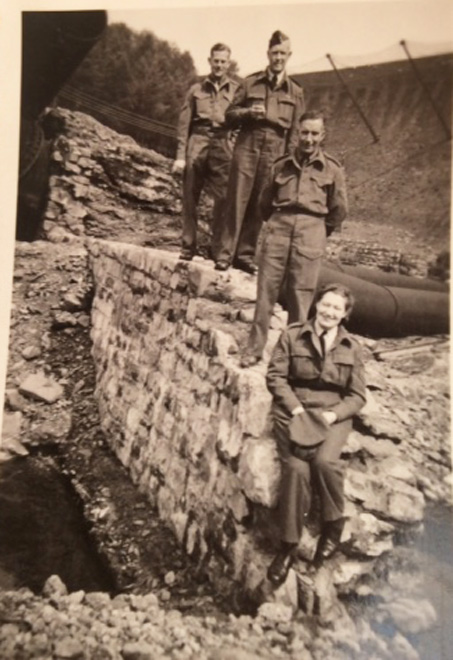 Blog reader Hilary George has just sent me these pictures of a relative, Kathleen George, and three other British forces personnel. They were taken at the repaired Möhne Dam after the war. The tops of the towers have been removed, so this was probably taken about 1945 or maybe even as late as 1947, and before the towers were rebuilt.
The third shot shows the group sitting on the remains of the powerhouse destroyed by John Hopgood’s bomb which bounced over the dam. The outline of the repaired breach can be seen, as well as the supports and netting installed by the Germans to defend the dam after it was rebuilt in 1943.
The pictures could well have been taken during a R&R period by occupying British forces stationed in Germany after the war. The smartness of the battledress, polished shoes and relaxed expressions suggests this. Judging by the number of figures in the background, it was already quite a tourist attraction.
The George family don’t know the identity of the three men in the pictures. If you know who they are or have any further information about the pictures, please get in touch.

[Thanks to Robert Owen for help with this.] 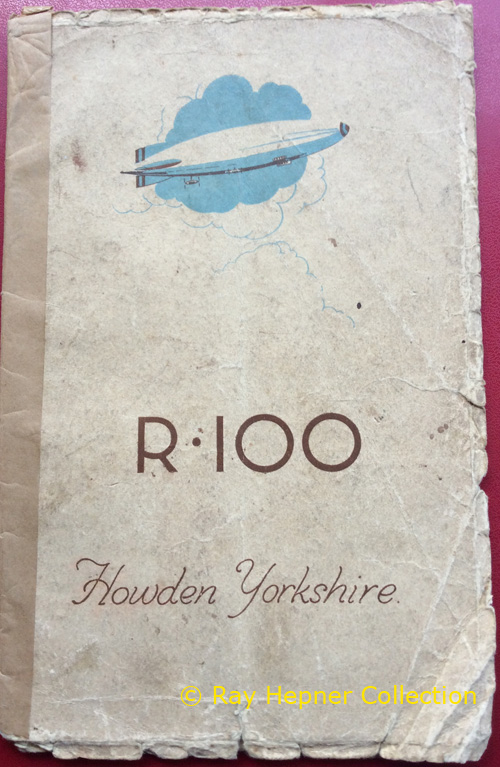 The name of Barnes Wallis is of course well known to students of the Dams Raid. But I bet that most people would struggle to remember many of the other projects, besides the so-called bouncing bomb, which he worked on throughout his long career as an engineer.
Back in the 1920s, Wallis headed the design team which built the R100 airship. This was a privately designed and built rigid British airship made as part of the Imperial Airship Scheme, a competition to develop a commercial airship service for use on in the British Empire.
The scheme is described on this website, dedicated to the work of Barnes Wallis:

Two airships were to be built and trialled against each other, the best elements from both being used to develop a second generation of airships. The ships were to have a speed of 70 knots and carry 100 passengers over a range of 3,000 miles. One ship was built by the Royal Airship Works at Cardington under direct Government control, and the other was built by Vickers (under their subsidiary the Airship Guarantee Company) on a wholly commercial basis, with Wallis as Chief Designer. Although built to the same specification, and hence broadly similar with a length of over 700ft and a capacity of 5,000,000 cubic feet, Wallis’s R100 and the Government R.101 were very different in the detail of their construction.
R100 was built from Duralumin (a light aluminium alloy) while most of R101’s structure was stainless steel. R101’s gasbags were held in place by a novel parachute-type harness, while Wallis developed a geodetic wire mesh for R100 to give greater gasbag volume. … most of R100’s structure was built from just 11 components (which could thus be mass-produced in their millions) and the entire structure was built from just 41 different components. Duralumin tubes of the length Wallis required were not available, so he designed a machine which would take flat Duralumin strip (which was available in long lengths), form it into a helix, and rivet the edges together to form a tube.

R100 first flew in December 1929. It made a series of trial flights and a successful return crossing of the Atlantic in July–August 1930, but following the crash of R101 in October 1930 the Imperial Airship Scheme was terminated and it was broken up for scrap. R100, which it could be argued had the more innovative design, was thus terminated even though it had a more successful life.
The brochure (from the Ray Hepner collection) whose cover is shown above would seem to have been designed about the time of R100’s first flight. The internal pages have an interesting design, which involved some hand mortising of metal type. The typeface is a large size of Garamond, with the full point hand cut so that it fits exactly above the tail of the curve of the swash capital R.

Wallis went on to use a similar geodetic wire mesh design for his later Wellington bomber, which made its maiden flight in 1936. More than 11,400 Wellingtons were built over the next decade, making it the largest production run of any British bomber in the Second World War.
Ray Hepner has also sent me some more pictures of Barnes Wallis taken at Reculver in Kent in 1976, 43 years after Wallis’s previous visit, to observe the last test drops of his Upkeep mine, the weapon used on the Dams Raid. Here are Lady Wallis and Sir Barnes, alongside Ray, who is sporting a particularly fine pair of 1970s flares.

Report from the Daily Telegraph:

A military historian denied stealing a logbook belonging to the widow of one of the heroes killed in the 1943 Dambusters mission.
Alex Bateman – a former employee at the prestigious Harrow public school [*SEE BELOW] – was writing a book on the Dambusters raid at the time, and was also working on a documentary.
The 48-year-old persuaded Doris Fraser to hand over the £20,000 piece of memorabilia, which had belonged to her late husband Flight Sergeant John Fraser, for his research.
Sergeant Fraser was one of two men to survive a plane crash during a mission with the famous 617 squadron in the Ruhr Valley in 1943.
After the war, Mrs Fraser and her children began a new life in Canada, but offered to help Bateman when she spotted a newspaper ad about his work.
Mrs Fraser posted him the log book in January 1996, and it is claimed repeatedly asked for the log book to be returned before reporting him to the police.
Bateman appeared via video link [*SEE BELOW] at Wood Green Crown Court to deny one count of theft today.
He was bailed ahead of his trial in the week beginning January 9 next year.
Prosecutor Nicholas Cribb today asked for a video link to Canada so Mrs Fraser, now 92, and her daughter Cherie, 66, [*SEE BELOW] can give evidence at trial.
Bateman, formerly of Harrow, denies one count of theft.

It is important for readers of this blog to understand that they should not make public statements which could prejudice the trial. For that reason comments on this post are disabled.

UPDATE: Further report from the Harrow Times.
* FURTHER UPDATE: There are several errors of fact in the Telegraph’s report above.

This photograph of the Möhne Dam is currently being offered for sale on Ebay by the Louth-based dealers Military Trader UK. The auction closes on 5 August. See here.
The dealers describe the photo as:

Genuine 617 SCAMPTON memorabilia. The other was sold on Ebay last week. This genuine photo was purchased from an Antique Dealer at Hemswell, which was near the base, although it originally came from RAF Scampton when the base closed together with many other items. The photo shows the Mohne Dam, pre War or early WW2, and certainly pre the Dams Raid of May 1943, (as it has no repair marks to the centre and no gun towers or nets)
It is an extremely rare photo used by RAF Intelligence when preparing the raid and was top secret. Not a reprint and the last…Own a genuine piece of 617 Sdn Scampton Dams Raid Memorabilia.

It is, however, a fake and therefore worth almost nothing.
Let’s start with the photograph itself. It is of the downstream side of the dam. However, it was definitely taken after the war. The biggest clue that this is so is that there is no power station below the dam wall. The power station was famously damaged on the night of the raid when John Hopgood’s mine bounced over the dam and hit it. It was then swept away by the later flood when the dam was breached.
Here is a genuine picture of the downstream side of the dam taken before the war, from a different angle but which still clearly shows the size and position of the power station.

And, despite the vendor’s claim, close inspection shows that the repaired area can be seen on the fake print. It is marked in red in this picture. 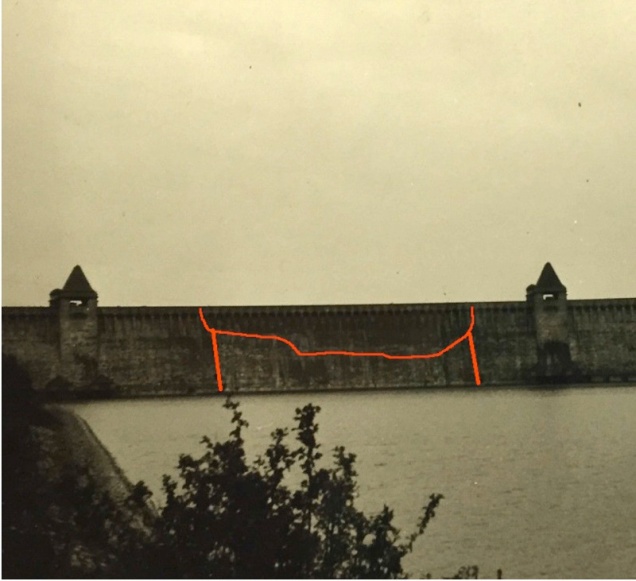 As for the “Intelligence Officer” stamp and number on the back, it is a clear case of a forger over-egging their work to try to create provenance. Any genuine official print would be likely to have an Air Ministry stamp and reference to the target’s name and location.
In addition, copies of the genuine intelligence target folder material (which was prepared as routine target information a long time before the raid) and used for briefing purposes for Operation Chastise are now in both the RAF Museum and the National Archives. They contain a number of photographs. Some were taken by reconnaissance aircraft in early 1943, but those taken at ground level showing the target in closer detail were copied from pre-war publications or tourist postcards. They include similar photos to the pre-war one above – although not this particular one and certainly not the one offered for sale.
This appears to be a deliberate attempt to deceive potential buyers, and should be condemned by anyone with a genuine interest in history or militaria.

Update 4 August 2016: The dealers have now changed the description of the picture. It now reads:

We’ve been informed that this photo shows the Mohne Dam ‘Post War’ (as it shows repair marks to the centre). However; despite close examination with a powerful magnifying loupe there are no repairs to the Dam in this photo and anything marked as such, is a total fabrication. This is the last of two original photos of the MOHNE DAM on the Ruhr.
Genuine 617 SCAMPTON memorabilia. The other was sold on Ebay last week.
This genuine photo was purchased from an Antique Dealer at Hemswell, which was near the base, although it originally came from RAF Scampton when the base closed together with many other items.
It is an extremely rare & original period photo & was Top Secret at the time.
This is not a reprint and is a 70+ year old photograph. It’s a photo; in which an image is focused on to light-sensitive material and then made visible and permanent by chemical treatment, ie ….. a photograph.
There were many WW2 photographs taken which were not developed on Air Ministry paper.

Please note that our original story above never asserts that this is a modern photograph. Rather it would seem to be a photograph taken sometime after 1944, when the repairs were completed. In their explanation, the dealers do not say why the power station does not appear in the shot.
We repeat our warning. This image is not a photograph used by the RAF in the planning of the Dams Raid.

Thanks to Dr Robert Owen for help with this, and to Nigel Favill for the tip.