If you’ve come to this page today after watching the C4 documentary, and then searching the web for information about the remake of the 1955 film The Dam Busters – the answer is there is no news. The film project is in the hands of Peter Jackson of Lord of the Rings fame, and is ‘in production’. Sir Peter is himself very busy on his new Hobbit film and, it would appear, has put The Dam Busters on the back burner for the moment. At various times over the last five years we have been promised that filming would start in 2009, 2010 and 2011. The best guess now is that it won’t be until 2013 at the earliest.

Steve Cooke has taken the time to plot out on Google Earth the route taken by AJ-J on the Dams Raid, as computed by Dick Timmers. You can download the file here.

If you don’t have Google Earth installed on your computer, you will need to download it first. I did, and took the above screenshot showing the Möhnesee as it is today.

If you missed the Channel 4 documentary, Building the Bouncing Bomb, last May, you now have another chance to see it. It’s being repeated on Channel 4 this Saturday, 24 September, at 7.30pm.

On right, Vivian Nicholson, while training as a navigator in Canada 1941. Pic: © Nicholson family.

One of the artifacts surviving from the Dams Raid is the navigation log of Sgt Vivian Nicholson, who was in the crew of David Maltby’s aircraft, AJ-J. It can be seen in the book, The Dambusters Raid, by John Sweetman (Cassell, 2002). A Dutch pilot called Dick Timmers, who now lives in Germany, decided to plot out the route taken by AJ-J using modern navigation software and techniques. 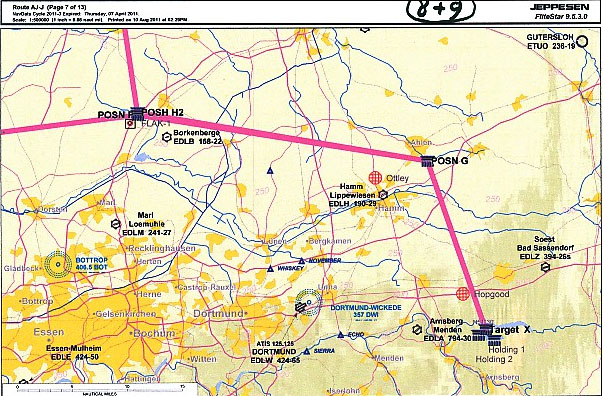 He has kindly agreed to make the plots available to anyone interested, and you can find them in PDF form here.

Below is an edited version of his explanation.

The nav log of Vivian Nicholson is a very meticulous piece of work done in a shaking and vibrating Lancaster in the most dangerous conditions. It took some effort and time to understand the system and its content. I ‘translated’ the log in my navigation/flight planning program from Jeppesen (a professional program used worldwide).

1. The route begins at EGXP (Scampton) via Woodhall Spa to West Raybham via a first FIX-J1 (no idea which landmark this fix represents.) further on to Southwold.

2. From Southwold via FIX-J2 (checking the drift) and FIX-J3 to FIX J-4, which is almost POSN A. POSN A is not reported in Vivian’s log and is crossed out on his route planning section on the overall sheet.

3. Also POSN B (a sandbank between the islands of Schouwen and Beveland) was not used and crossed out as well. However, this was an important waypoint/landmark at the Dutch coast. So AJ-J crossed the coast a bit off route to the north scratching Schouwen. This course deviation was not critical, because pilot, bomb aimer and flight engineer must have been able to see later on a large windmill at the coast of the peninsula of Tholen (this wind mill was according to Gibson a landmark and pinpoint). POSN C was (and still is) a railway intersection on the southern tip of Roosendaal. This position was mentioned by John Sweetman as a waypoint).

4. From Roosendaal due east to POSN D to pick up at the last third of this leg the Wilhelmina canal, which was followed until it ended in a canal (running north-south) at the village of Beek en Donk (POSN D).

5. From POSN D to Rees (POSN E). Approx. 11 miles prior arriving at Rees AJ-J pinpoints (P/P J1) at the town of Goch just behind the Dutch border. Again I have no idea what type of landmark was looked for.

6. POSN E are two sharp bends of the Rhine looking like an ‘omega’ with a small harbour on the top of the ‘omega’ at the right bank.

7. From POSN E to POSN F (landmarks are a few small lakes near Dülmen. Gibson warned for intensive flak and the coordinates were transmitted to the attacking aircraft by Group Headquarters were exactly at POSN F (according to John Sweetman).

8. From POSN F to a turning point at POSN G at Ahlen (most probably the landmark was a coal mine shaft with a slag hill, but I am not sure).

AJ-J spent a total of 28 minutes at the Möhne Dam.

Home journey
The first part of the return flight of AJ-J is somewhat confusing, because the waypoints POSN H, especially G and T in the nav log do not sequence. However the logged Distance To Run and E.T.A. indicate clearly the route which was flown. The waypoint G on the return flight was also used for the waypoint F on the outward flight. Maybe a writing error??

2. From POSN G to POSN G (probably writing error instead of F) to the Dülmen lakes. (Why did they not circumnavigate the Dülmen lakes avoiding the reported intensive flak? Maybe the transmitted coordinates by Group Headquarters were not correct?)

3. From the turning point Dülmen to POSN T (landmark just north-north-west of Nordhorn at the Dutch border. No idea what type of landmark. Maybe a railway/road crossing or the church steeple of Nordhorn.) Checking their course Gildehaus, a very small village, was pinpointed, but again I have no knowledge of a good visible landmark at Gildehaus).

4. From POSN T to POSN L. But POSN L (Zwarte Water) was missed by appr. 4 miles to the north. Pinpointing the town of Hardenberg (type of landmark?). Also no problem for the crew as they could pinpoint a lake (Beulaker Lake) just north of their anticipated waypoint.

5. From this lake towards POSN J in the North Sea. As indicated in Vivian’s log AJ-J became a ‘workable GEE’ just before reaching POSN J as can be seen on his first FIX he made (FIX To Base 1).

6. From POSN J to Wainfleet a further FIX To Base 2 shows that AJ-J is on track, but only if Wainfleet was their aim to make landfall. Because otherwise their heading would have brought AJ-J to Coningsby.

As Dick says, the conditions in which Vivian (who was flying on his first operation!) wrote out his log were very difficult, and these probably account for the few small writing errors.

Dick has also sent me a video diary showing part of the course from the air, when he flew along it himself. He has also recently flown over the Möhne itself and concluded that the approach from the north east is technically impossible. The aircraft must therefore have flown up from south of the dam, as first described in Arthur Thorning’s The Dambuster who cracked the Dam. If you would like to see Dick’s video, please contact me, and I will pass your details onto him.

Lots of technical reasons why it’s taken a week to get this up on YouTube, but here it is.

I have never been so close to a Lancaster flypast before, and what caught me by surprise was how low it flew and how quickly it passed. Although we knew the direction in which the aircraft would come, and were prepared for it, the first pass happened so quickly that no one caught it on video. Luckily we were better prepared for the second and third approaches, and my son was able to catch just 22 seconds worth altogether.

The country’s only flying Lancaster couldn’t make an appearance, but a couple of hundred people were not deterred, and made Saturday’s tribute to the crew of Dams Raid Lancaster AJ-J in Wickhambreaux, Kent, a very special occasion.

The village churchyard contains the grave of pilot David Maltby, whose body was the only one recovered from the North Sea when the aircraft he was flying crashed on 15 September 1943. Every year, local people gather to commemorate David and the rest of his crew, who have no known grave. This year, we were privileged to be joined by representatives of the families of three of other crew members, John Fort (bomb aimer), William Hatton (flight engineer) and Victor Hill (front gunner).

As well as the graveside tribute, a small exhibition took place in the Village Hall, which was opened by the Sheriff of Canterbury, Cllr Hazel McCabe.

Obviously, people were disappointed that the Lancaster was prevented from flying by high winds (foreshadowing Monday’s gales in the wake of Hurricane Katia) but that did not prevent a very impressive turnout, and a poignant and moving service, led by the Vicar, the Revd Chris Wilkinson.

Many thanks to all who came, and to Revd Chris Wilkinson, the Wickhambreaux Parish Council, the Village Hall Committee, the Sheriff of Canterbury and the Rose Inn for their help. 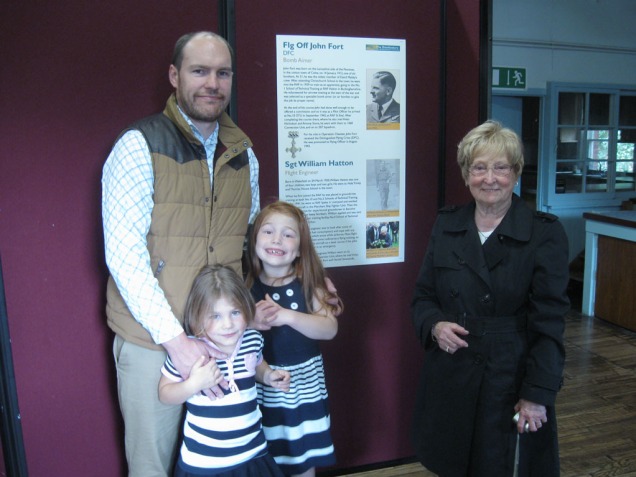 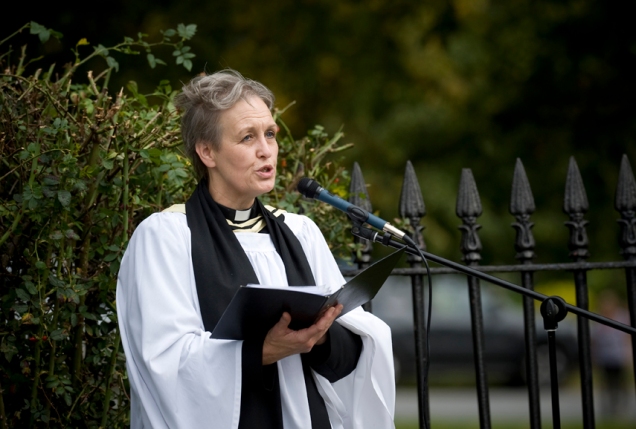 It’s a fine dry afternoon here, with the weather a bit cloudy, but apparently the forecast for this weekend is for high winds. The BBMF have just contacted me to say that all flying for this weekend has been cancelled. This means that the Lancaster flyover planned for tomorrow (Saturday) has been called off. The aircraft is currently at Manston — 20 or so miles away — and it is likely to fly over us here late this afternoon, so local people will be able to see it. I will post some pictures on the blog as soon as I have them.

However, we are going ahead with the exhibition opening followed by the ceremony at David Maltby’s graveside. If you have made plans to come here, please do. Local children have been tidying the grave, and a large local crowd is expected. The families of several of David Maltby’s crew will be here and it will be a great tribute to them.

We’ve just had three passes by the BBMF Lancaster – see the picture below.