Say the name RC Sherriff to most people and their instant reaction is likely to be ‘the man who wrote Journey’s End.’ He is certainly best known for this, and the popular identification with his first widely produced play will surely grow all the while it remains on the GCSE set text list. The First World War classic was based on his own experiences serving in the trenches as a captain in the East Surrey Regiment.
It could also be argued, however, that Robert Cedric Sherriff deserves to be widely remembered for another reason, as the man who provided Hollywood with the first British ‘stiff upper lip’ characters – archetypes which persist today in the kind of roles given to actors like Colin Firth, Ralph Fiennes and Jeremy Irons.
Journey’s End was a huge success. First produced in late 1928, it then ran for two years in the West End, and went onto Broadway and other parts of the world. It enabled Sherriff to quit his job in insurance, first to go to study at Oxford and then to become a full time writer. He was lured to Hollywood by the legendary producer Sam Goldwyn (‘A verbal contract isn’t worth the paper it’s written on’, ‘Include me out’, etc, etc) where he worked both as a writer of original screenplays and a script ‘doctor’. His original work included The Invisible Man and Goodbye Mr Chips, and his rewrites such wartime classics as Mrs Miniver.
In his BFI monograph, John Ramsden noticed the importance of the timing of his arrival in Hollywood, in the early 1930s.

At exactly the moment when sound films were about to sweep all before them, in 1928, Sherriff captured in Journey’s End the way in which a certain type of British officer and gentleman spoke and behaved. He then carried these manners and forms of expression into his screenplays, was much imitated in doing so, and saw them develop into clichés of cinematic Englishness.
(John Ramsden, The Dam Busters, Tauris, 2003, p.38.)

It’s worth noting that although Sherrif developed this style, he wasn’t himself from an upper middle class background. His father worked in insurance, and the young ‘Bob’ went to a grammar school, Kingston Grammar, not a public school. But his love of rowing and his service in the war as an officer would have brought him in touch with the kinds of people he is famous for depicting.
His understated style of writing is an important characteristic in what could be argued is Sherriff’s second most important work, the screenplay he wrote for The Dam Busters in 1954. There are many examples throughout this script where a character says just a word or two, but this is more than enough to drive the film’s narrative forward:

Gibson: ‘I wanted you for this. You’re the low-flying expert.’
Martin: ‘Low flying? Fine.’
—
WAAF: ‘Are you flying tonight?’
Pilot: ‘That’s the general idea.’
—
Wallace: ‘Why don’t you turn in, Gibby?’
Gibson: ‘I have to write some letters first.’

This last exchange is the final piece of dialogue in the film. As the music swells to a great climax, Wallis moves away and Gibson turns and walks back to his office, acknowledging the salute of a passing sergeant. We know that he is about to undertake the commanding officer’s most terrible duty.
Sherriff was nominated for a BAFTA for his script, one of the two nominations he got for this award in 1955. The other was for the lesser known The Night My Number Came Up, which also featured Dam Busters actors Michael Redgrave, Ursula Jeans, Nigel Stock and Bill Kerr. However both were beaten by the classic comedy, The Ladykillers.
By the time The Dam Busters was made, Sherriff was living more or less permanently back home in England, in a large house, Rosebriars, in Esher. Although he was described as a shy and retiring man (see this reference, scroll almost to the bottom of the page) he was still actively involved in rowing, and was a member of several clubs until he died.
This passion for rowing explains a number of references in The Dam Busters – Melvin (‘Dinghy’) Young’s Blue for rowing at Oxford and Henry Maudslay’s feat of being captain of rowing at Eton are both mentioned.  A prop made to look like Young’s Boat Race oar features in the sequence after the raid, when the camera zooms in on various reminders of the aircrew who have failed to return. [Updated, January 2013]
Sherriff never married, and died in 1975 without leaving an heir. A trust was established with the money from his estate, and is used still to support arts activities in the borough of Elmbridge. And the boat club at his old school still uses his name for its fundraising and support activities.

Nearly two years ago, I published a post about an interview with the sister of Vincent MacCausland which I had found online. This was printed in his hometown paper, the Prince Edward Island Guardian, on the 65th anniversary of the Dams Raid. Now a lot more material about him has come to light.
MacCausland was the bomb aimer in Dinghy Young’s crew in Lancaster ED887, AJ-A, and was therefore responsible for dropping the fourth mine of the night, the one which caused the initial small breach in the Möhne Dam, later broken completely by David Maltby and his crew.
Joel Joy has been collecting further information about MacCausland, and has come up with a number of new bits of information and photographs which he has kindly allowed me to publish here.
Vincent MacCausland joined the RCAF in 1940, and after training as an observer and then a bomb aimer completed a first tour in 57 Squadron. He received a commission and appears to have returned to 57 Squadron, which had by then moved to RAF Scampton, for a second tour in March 1943. He was then drafted into a crew of newly qualified personnel allocated to the experienced pilot Melvin Young, when their original bomb aimer was found to be unsuitable. Young was the commander of 57 Squadron’s C Flight, and when the call came out for experienced crews to join the new 617 Squadron to undertake a special secret operation, the entire flight was moved across the base. These were the crews captained by Melvin Young, Geoff Rice, Bill Astell and Sgt Lovell. (The last was only to stay a few days, and were transferred back to 57 Squadron.)
Intensive training followed. Young was put in charge of A Flight, which gave him a number of extra responsibilities, including organising much of the training schedules.
One of the remarkable discoveries made by Joel Joy is that some of Vincent MacCausland’s letters home are in a Canadian archive, the Canadian Letters and Images Project, based in Vancouver. They go back to 1940, when he first joined the RCAF.
Only one, written on 17 April 1943, survives from this period. In it he writes:

You are perhaps wondering what I am doing here. There is really no need to feel over anxious to know that I am back again for my second tour. I really was due back six months after Sept of 41 and had the privilege of joining a well experienced crew and on aircraft that one dreams about. To tell you the honest truth I would not have taken this on had I believed it was a doubtful move. I came up here a couple of days ago (Apr 14th) and we are on revision and conversion for the next month before going over with a few bundles for the squareheads I know that you will be feeling most anxious during those few months ahead but the time will soon pass and I know that God will be especially with us as were blessed in that first tour. I hope that we shall be writing at least two to three times per week and if you do the same, it will be much happier for us all.

Sadly, the blessings that were bestowed on him in his first tour would not follow him to his second. Having been so instrumental in the destruction of the Möhne Dam, Young was detailed to act as Gibson’s deputy at the Eder. After it too was blown by Knight’s successful mine drop, Gibson, Shannon, Knight, Maudslay and Young set off for home. Unfortunately the latter two – the squadron’s two flight commanders – didn’t get back. AJ-A was shot down crossing the Dutch coast near IJmuiden, and crashed into the sea. The bodies of all its crew were washed ashore during the following two weeks.

All seven are buried in the cemetery near Bergen. 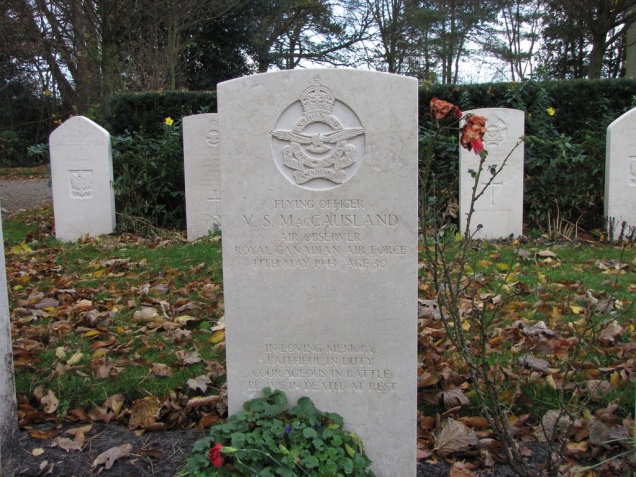 Two more contemporary items are shown here. These are the missing and death notices published in the Toronto Globe and Mail. The first of these, from June 1943, gives the names of all the Canadians who went missing on Operation Chastise (including John Fraser, who was later discovered to have baled out and been sent to a PoW camp). The second, from December, gives the list of those confirmed dead. 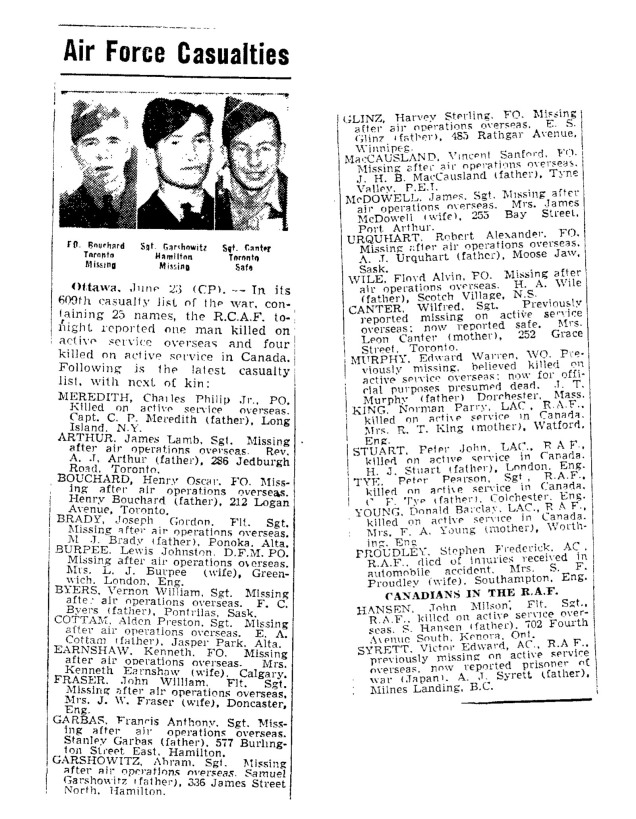 Post edited, November 2010. The correct number for the aircraft AJ-A piloted by Sqn Ldr HM Young on the Dams Raid was ED887/G. 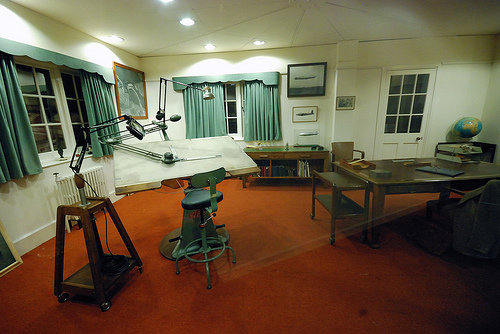 It’s a long time since I’ve had a proper look around the RAF Museum in Hendon, North London. On my last visit I was in a rush to get to the research library upstairs. So I’ve missed the fact that there is a re-creation of Barnes Wallis’s office in the exhibition hall, complete with his real drawing board and other paraphernalia. From this picture it looks as though the famous photograph of the Möhne lake after the dam was broken is hanging in the corner. Wallis brought this to the party in the Hungaria restaurant after the Buckingham Palace investiture ceremony, where it was signed by most of the surviving aircrew who took part in the raid.

Full set of mickb’s pictures are here on Flickr.

Ken Stone, whose own father completed a wartime tour in Bomber Command as a Lancaster pilot, has kindly sent me the full obituary from the West Australian of the “other” Flt Lt Martin, who died recently. This wasn’t available online, so it’s a useful resource. Click here to see in full.

These pictures date back to the 65th anniversary of the Dams Raid in May 2008 (incidentally the month I started this blog!). They show aircraft from the Battle of Britain Memorial Flight in action over the Ladybower reservoir in the Derwent valley, Derbyshire. They are great shots and deserve a mention, even at this late stage. Thanks to Rob McPherson for sending them to me.