Among the many fascinating items in Ray Hepner’s collection of Dams Raid artifacts are a number of press cuttings from down the years. This great article from the Mail on Sunday’s You magazine is just one. It was taken sometime in early 1993, and appeared in the magazine on 9 May 1993, the week before the 50th anniversary of the Dams Raid.
The picture shows (left to right) Dudley Heal, Edward (“Johnnie”) Johnson, Jimmy Clay, David Shannon, Basil Feneron and George Chalmers lined up in front of the Battle of Britain Memorial Flight Lancaster at RAF Coningsby.
The caption to the picture doesn’t say this but the article which accompanies it does note the sad event which occurred between the photograph being taken and its publication a few weeks later: the death on 8 April 1993 of David Shannon, something which rather put a dampener on the anniversary events.
Time has marched on since then, and now all these gentlemen are no longer with us. But it is nice to see them all together in the autumn of their years, for one last time. 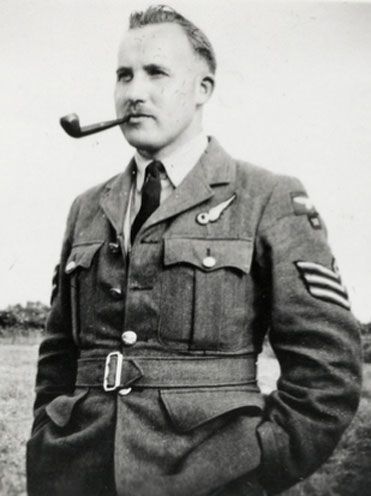 Second wave. Aircraft badly damaged by flak on outward flight. Returned to base with mine intact.

James Henry Clay was born on 2 February 1911 in North Shields, Tyne and Wear. His parents, Robert and Mary Clay, had 12 children of whom James was the fifth. Robert Clay worked as a stonemason.

After joining the RAF and qualifying as an air bomber, Jimmy Clay crewed up with Canadian pilot Marcel Cuelenaere while training, as did his future Dams raid colleague Harvey Weeks. This crew joined 97 Squadron at Woodhall Spa in October 1942. (By the war’s end, Cuelenaere had completed two tours, reached the rank of Squadron Leader and been awarded the DFC and Bar. He returned to Canada and set up a successful law firm.)

Clay was in fact in operation before the rest of his crewmates, having been allocated to the crew of another Canadian pilot, George Lancey, for the famous daylight raid on the Le Creusot works on 17 October 1942. This, however, resulted in an early return with engine trouble.

The Cuelenaere crew were in action together ten days later, and began a run of almost 30 operations together which ended in March 1943, when their pilot reached the end of his tour. This coincided with the call for volunteers for the new 617 Squadron, which Les Munro and most of his crew decided to accept. However, as they were short of a bomb aimer, Clay volunteered to go with them.

Clay settled in with his new crew and was in front row position on the Dams Raid when AJ-W was hit by flak while crossing the Dutch coast. He maintained that the damage came from a flak ship, disagreeing with Bill Howarth and Les Munro who both thought it came from a land-based installation. Clay wrote afterwards: ‘Then we were over Vlieland in the Zuider Zee (Waddenzee) when suddenly a flak ship opened up. None of us in the aircraft saw this vessel although we had, as customary, been keeping a sharp lookout. We must have been a sitting target to the gunners below, a close target silhouetted against the sky.’ John Sweetman quotes this account in The Dambusters Raid (Cassell, 2002) and adds: ‘Perhaps significantly, a detachment of 3/Marine Flak 246 stationed at the western end of Vlieland did report engaging “several Lancaster bombers” between 2257 and 2340 on 16 May.’ (p.180).

Clay’s next operation was some two months later. He received a flesh wound to the nose caused by a bomb fragment when the Munro crew attacked an Italian power station, but flew a little too low over the target. They went on to land in RAF Blida, Algeria. Luckily, he made a recovery from this injury and went on to fly with Munro some 17 more times until May 1944.

He was commissioned in November 1943, and received the DFC in July 1944. The citation said that he had completed 46 operations without a break. He served in various training units until the end of the war and left the RAF in December 1945.

Jimmy Clay returned to Tyneside after the war. In 1944, he married Patricia Butcher, a widow with one daughter. They had another daughter together. He worked as an accountant, and died in Gosforth on 6 August 1995.

Further information about James Clay and the other 132 men who flew on the Dams Raid can be found in my book The Complete Dambusters, published by History Press in 2018.