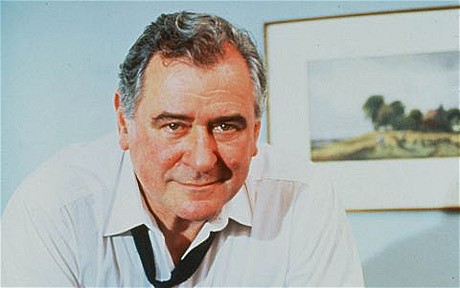 The actor George Baker, who died on Friday, had a long and distinguished career on the stage, in TV and films, most recently as Inspector Wexford in the long running series based on Ruth Rendell’s detective stories. Dambuster aficionados will, however, recall that one of his first important film roles was that of Flt Lt David Maltby in Michael Anderson’s 1955 film.

The new Daily Telegraph film critic, Robbie Collin, has written a long and perceptive obituary for the paper, which you can read online. He cites the story I told on this blog a couple of years ago, about how George Baker wrote to me when I was researching my book about David Maltby, saying that one of the reasons he was chosen for the part was his strong resemblance to his real life character. 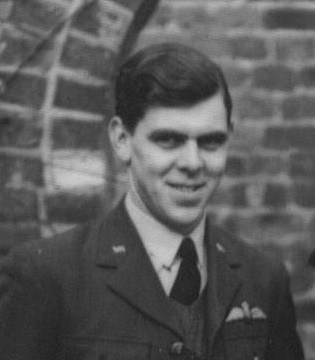 The real David Maltby, photographed in 1942

George Baker as David Maltby, in The Dam Busters (1955), standing at the back of the group.

In truth, the part of David Maltby in the film is quite small, and much of the time he appears his face is hidden by a flying helmet and oxygen mask. But he does get a few memorable lines, one in the ‘rag’ in the mess when the 617 squadron aircrew are teased once too often by their 57 squadron colleagues about their endless training and lack of operational flying.

This results in a giant ‘debagging’ fight with both crews trying to remove each others’ trousers. Guy Gibson, played by Richard Todd, hears the row from his office, and then has to pick his way through the scrum outside on his way to a meeting with station CO Charles Whitworth. He pauses to rescue David Maltby from the melee and receives heartfelt thanks: ‘Thank you sir. Saved my life. Never forget it.’

It was always a source of pride to my family when we were growing up that the part of our uncle in such a great film had been played by so distinguished an actor, and we used to follow George Baker’s career with proprietoral interest. He was a modest, self deprecatory man, who will be much missed.

The man who, unwittingly, set me off on the track of writing a book about the Dambusters was the actor George Baker, whose birthday is today. In an interview on the BBC Radio Today programme in December 2005 he told the story of how he had been cast to play the part of my uncle, David Maltby, in the 1955 film The Dam Busters. During the making of the film Gp Capt Charles Whitworth, the technical adviser, relayed to him the information that David was sometimes so wound up after operations that he released the tension by shooting china plates with his service revolver. This was a story that no one in my family had ever heard before, and it therefore seemed to me to be important to tell more of the family history before time took its inevitable toll on us all.
In an email to me a few months later he told me how hard casting director Robert Leonard and film director Michael Anderson had worked to ensure the actors looked like their real-life characters. This was sometimes a bit confusing for poor old Charles Whitworth:

On the desk in front of them [Leonard and Anderson] they had a photo of [David Maltby] and one of me and I must admit that there was a considerable similarity. Then when I met Group Captain Whitworth he fell into the habit of calling me Dave, which was really quite disconcerting.
[Whitworth] would often refer to an incident thinking that I had been there. This is how the story of the plate shooting came to be told, quite obviously the men of the squadron became extremely tense before and after an operational ﬂight but other indications from the Group Captain told me that [David Maltby] was a very funny man and a delightful companion. I feel very honoured to have had the chance to portray him in the ﬁlm.