Anyone who has read the later chapters of Paul Brickhill’s book The Dam Busters may recall the chapter devoted to a gadget called the Stabilising Automatic Bomb Sight (SABS). This had been invented in 1941 to enable aircrew drop big bombs more accurately, but for it to work an aircraft had to run straight and level for ten miles in the period immediately before the bomb was dropped. It was claimed that if the sight was used properly a bomb could be dropped from 20,000 feet with an accuracy of under a hundred yards.

617 Squadron’s “Bombing Leader” was Flt Lt Bob Hay, bomb aimer in Mick Martin’s crew. Each squadron had a “Leader” for each of the specialist jobs in an aircrew – Bombing, Signals, Navigation, Engineering and Gunnery. Their job was to co-ordinate specialist training and other matters across the squadron, sorting out problems and schedules, liaising with the Flight Commanders and so on.

Hay therefore had to deal with the man Brickhill calls “Talking Bomb”, a Sqn Ldr Richardson who arrived at Coningsby to train the crews in the use of the SABS. It was hard work and required intense practise, but eventually the crews got quite good at its use, with Hay himself setting the standard with an average deviation of just 64 yards.

Hay was therefore called upon to write an article for the 5 Group’s internal newsletter, 5 Group News, in order to spread the word amongst other squadrons in the group. This article has recently come to light, and the text has been reproduced  on the Stirling Aircraft Forum website. You can read the full article there, but here is a short extract:

The excellent results gained by crews of 617 Squadron using the S.A.B.S. have only been achieved by the fullest, most practical use of the ‘bombing team’. Before any bombs are dropped, some 4 hours training on the specially adapted A.M.B.T. are carried out by the pilot and air bomber to give manipulation practise to the latter and to familiarise the pilot with the B.D.I. (Bombing Direction Indicator).

The SABS was used successfully on a number of raids but sadly Bob Hay was not around long enough to share in any glory. He was killed in February 1944, when Martin’s aircraft was badly damaged by anti-aircraft guns on an attack on the Antheor viaduct in France [Thanks Tim, see comment below], and is buried in Sardinia. He was the only member of Martin’s Dams Raid crew who did not survive the war. 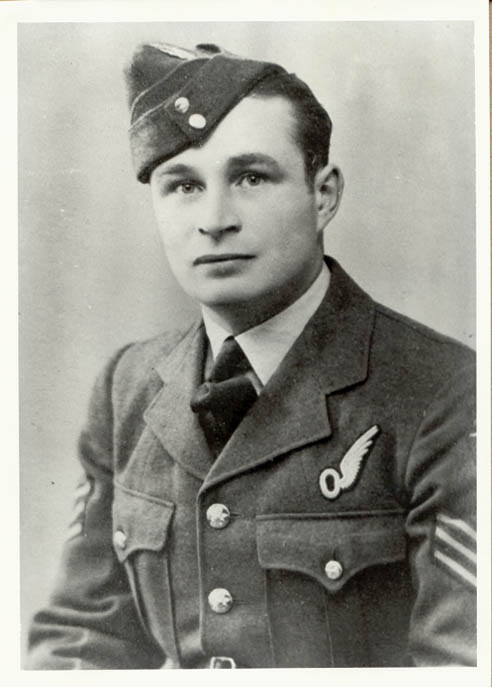 I last wrote about Vincent MacCausland some eighteen months ago, and reported on some letters and pictures which had been found in Canada by Joel Joy. Joel has now pulled everything together in a Flickr page, and added some more pictures which he has come across.
Joel is doing a grand job researching the lives of the Canadian Dambusters, and we can expect more material as and when he unearths it. 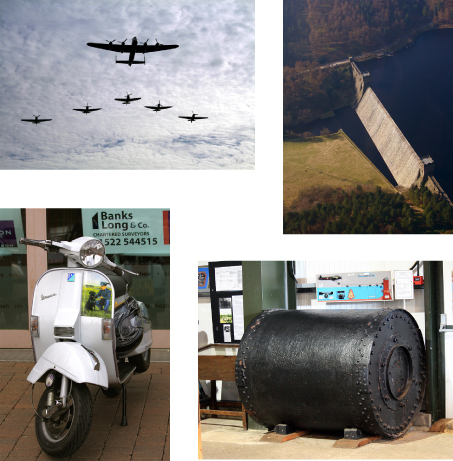 Deep in the heart of Lincolnshire lives Anna Haworth, photographer extraordinaire. She has a particular fascination with all things aeronautical, and most especially the Dambusters. There are loads of pictures on her Flickr page, which you can see here. And here is the link to her Dambusters collection, which contains stunning shots from trips over the Derwent dam, atmospheric pictures from the Petwood Hotel, the collections at Metheringham, East Kirkby, Scampton and Coningsby, to name just a few. Plus some other oddities that she has come across, such as the decorated scooter shown above.

So far, I can’t find any reviews posted online, but I have come across an interesting preview article in the New Statesman in which Guy Walters argues that Holland completely counters the “revisionist” view that the Dams Raid actually achieved very little. According to Walters:

The raid was in fact a triumph, and did an enormous amount of damage. After studying the German archives, Holland shows that: “…not only were two major dams completely destroyed, so too were seven railway bridges, eighteen road bridges, four water turbine power stations and three steam turbine power stations, while in the Ruhr Valley alone, eleven factories were completely destroyed and a further 114 damaged, many severely. Vast tracts of land had also been devastated by the tidal waves that had thundered up to eighty miles from the dams.”
Such damage can hardly be considered “little of substance”.
Furthermore, Holland completely skewers the argument that as the dams were quickly rebuilt, the damage was therefore not that great. The whole point of their swift reconstruction “underlines just how important they were to Germany”, and the men and material required had to be diverted from elsewhere.
Holland also argues that the destruction of the dams struck a huge psychological blow against the Germans, as these were structures that were venerated as triumphs of the country’s might and technical knowhow. In short, the raid was indeed a catastrophe for Nazi Germany, and a triumph for the British.
Holland’s analysis will no doubt draw its detractors, perhaps inspired by a politically fashionable thinking that seeks to denigrate just about every British success during the Second World War. Of course, there was much that we got wrong, but we also got many things spectacularly right.

In my view, Holland’s programme was a well researched and presented documentary. There were interviews with three of the four surviving Dambusters – Les Munro, Grant McDonald and George “Johnny” Johnson – and a good use of far flung written source material, such as Charlie Williams’ letters, which are in archives in Queensland, Australia.

Perhaps the point that came across most strongly was the airmanship involved. Flying a 30 ton aircraft a thousand miles through hostile territory just 100 feet above the ground required enormous concentration, exceptional skill and tremendous luck. When you consider the odds it is no real surprise that eight of the 19 aircraft failed to return. And no surprise, either, that this tactic was only used sparingly in the rest of the war.

With so much already written and broadcast about the Dams Raid it is not surprising that little new information emerged. But that shouldn’t detract from what was a thorough film, mercifully lacking most of the frills and tricks which many documentary directors nowadays feel it necessary to add. Catch it again on iPlayer while it is still available!

Sources tell us that some quiet progress is being made on filming the remake of The Dam Busters.

(A brief recap for those not familiar with the project. This story has been going on since 2006, when David Frost bought the rights to remake the 1955 original, which was directed by Michael Anderson and starred Richard Todd and Michael Redgrave. Peter Jackson of Lord of the Rings fame became the producer, announced that it would be called Dambusters and made in New Zealand, under the direction of Christian Rivers with a script by Stephen Fry. A full size model Lancaster bomber was built, and unveiled to the press in 2009. However, Jackson is now busy filming The Hobbit, so is obviously not giving the Dambusters project his full attention.)

Sources have told us that some CGI and special effects work is now being undertaken in workshops in New Zealand. Some of this involves models – one of the spinning bomb in the bomb bay – and some is completely generated on computers. This kind of work is laborious and time-consuming and is essential if the project is to meet the high standards of a Jackson-helmed production.

No actual casting has yet been announced, so the date when real life filming will begin is still a matter of speculation. I said at the time I started this blog, in 2008, that 2011 would be the earliest possible date that the film would appear. It now looks as though it could be 2013 or 2014. May 2013 will be the seventieth anniversary of the Dams Raid, so this could be a date which the producers will aim for. 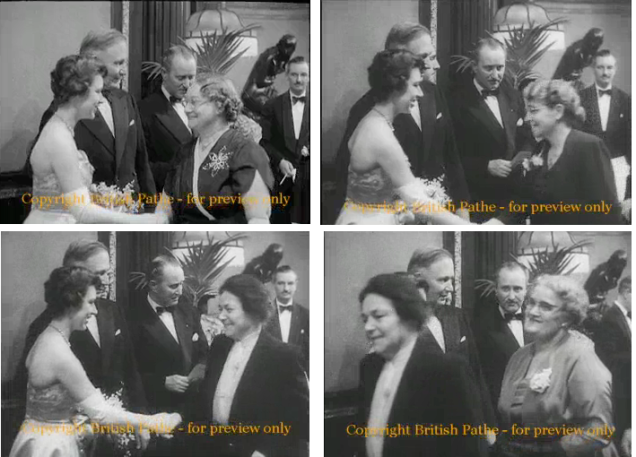 I mentioned in an earlier post the Pathé newsreel shot at the premiere of The Dam Busters in 1955. Four middle-aged women are shown being presented to Princess Margaret, and are identified only as the mothers of four aircrew who died on the Dams Raid. I’ve now done a screengrab of each of these, in the hope that someone out there may be able to identify a grandmother or great aunt.

Please get in touch if you recognise any of these. 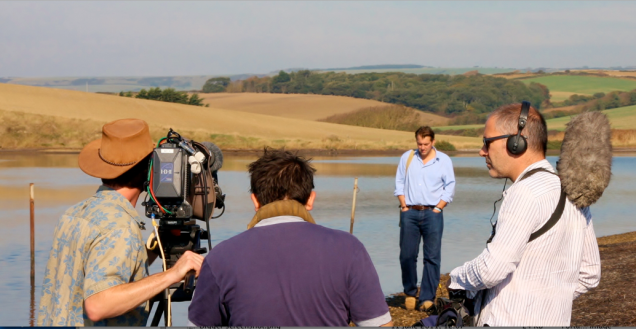 BBC2 is to screen yet another documentary about the Dams Raid next Tuesday, 8 November at 9pm. Subtitled “The Race to Smash the German Dams”, this promises to be a less superficial film than last autumn’s effort, which was fronted by an actor rather than a historian.

The writer and presenter James Holland would appear to have done a lot of research, even flying to New Zealand to interview Les Munro, and has only just finished the final editing, according to this entry on his blog.

The two main thrusts of the film would seem to be the speed at which the operation was put together – something which is covered well in John Sweetman’s seminal book on the raid – and the fact that not all the crews were as experienced as some accounts would suggest. The myth that Gibson “hand picked” the crew is something that has crept into the story from his book, Enemy Coast Ahead, but as this section of the book is based on an article in the Sunday Express which was ghost written for him, it is not a reliable account.

In fact, many of the pilots were pretty experienced, having done a full tour or the best part of one. But their crews may not have been. David Maltby, for example, had just come back to 97 Squadron to start a second tour, and had been allocated a new crew, not long out of training. They then moved as a unit to 617 Squadron, and for some, including navigator Vivian Nicholson, the Dams Raid was their first operation.

James Holland has also posted a transcript of his interview with Les Munro on his website. It is a very rough transcription, full of mishearings and typing errors, but interesting if you want to hear Les’s words first hand.