Best wishes for the festive season to all the readers of this blog, wherever the boys in the NYPD Choir* are singing for you.
I have had a great year working on this blog, with two particular highlights. The first was travelling to Germany to take part in the unveiling of the memorial to the Dams Raid crew of AJ-E, in the company of relatives of six of the crew who died on that night. Thanks once again to Volker Schürmann and the rest of the local German community who instigated the memorial and made us so welcome. The second was the completion of the 133 Dambuster of the Day biographies in August, which I hope means that at last every single man who took part in the Dams Raid gets his own small place in history marked for ever.
I look forward to another year of providing a lot more Dambuster information. Have a very good Christmas and a happy New Year.
Charles

*And in memory of the late great Kirsty MacColl.

An alert aviation buff called Sean in Wellington, New Zealand, spotted some interesting activity back in October near his workplace. Writing on the Wings over New Zealand forum, he reported: “The rumors that five Lancaster’s were / are stored next to where I work have now proven to be true, as over the last few days I have seen three truckloads of Lancaster parts being put back into storage. These included wings, and engines and other big parts. The trucks were uncovered, so they were not trying to hide anything. Have no idea where they came from but I am guessing Masterton, as that was where there were seen last. Not sure if this means they are going back into storage as there is no further need for them (no film), or they may have finished some filming…. hopefully someone here might know. I know Peter Jackson stores a lot of his stuff here as we are always seeing his WW1 tanks and buses etc being moved in or out usually in the weeks up to ANZAC day.”
A few days later, Sean saw another shipment in transit, and took a series of photographs, one of which is shown above. The fact that one segment of fuselage displayed the code letters AJ-G is of course confirmation that the models were made for the Dambusters film remake. However, as Sean points out, there has been no clue from the notoriously secretive Wingut Films as to when the remake will go ahead.
Sources do continue to suggest that Peter Jackson remains personally committed to the project. This was confirmed in the interview given by Jackson in Oxford in the summer, which appears to have been reported only in the hitherto obscure medium of the website of Exeter College, whose ex-students include JRR Tolkien.

Asked what projects he might want to pursue next, Jackson stated he was in “no rush” to recommence filming. Nor indeed, to return to Hollywood.
“At the moment . . . a lot of the films there are not the sort of films I particularly enjoy. So what Fran and I are probably going to do is make some smaller movies, make some New Zealand movies.
“I’ve got The Dam Busters too: I’ve been working on a script with Stephen Fry over the last few years on and off. But whatever we do over the next few years, it will be quite a lot smaller.”

So there we have it. A small Christmas bonus for Dambusters fanatics.
If you want another treat, then scroll backwards in the Wings Over New Zealand posting mentioned above, and find some great pictures from the New Zealand premiere of the 1955 film:

Anyone who donated to the successful appeal for a memorial to the Dams Raid crew of AJ-E should by now have received a souvenir postcard showing the plaque. These were dispatched over the last few weeks by our good friend Volker Schürmann, the appeal organiser. But if you look closely at the top right hand corner of the card, you will see a little bonus – a commemorative stamp produced by the German post office in 2013 to mark the centenary of the construction of the Möhne Dam. The eagle-eyed Volker purchased a stock of these at the time of their production and kept them aside specially for the cards, to add what he calls a little “British humour” to their publication. A nice gesture. Whether it adds any value to the card, we can’t say at present, but put yours away in your loft and let your grandchildren reap the benefit in 50 years time. 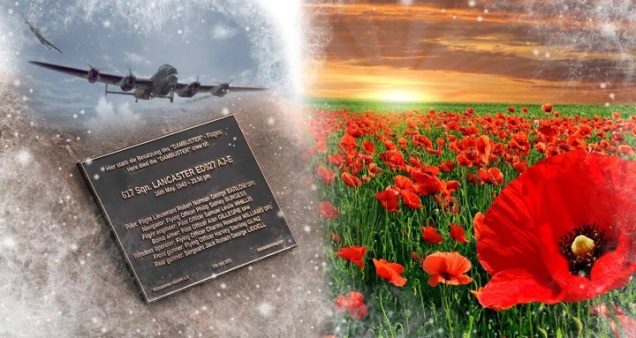