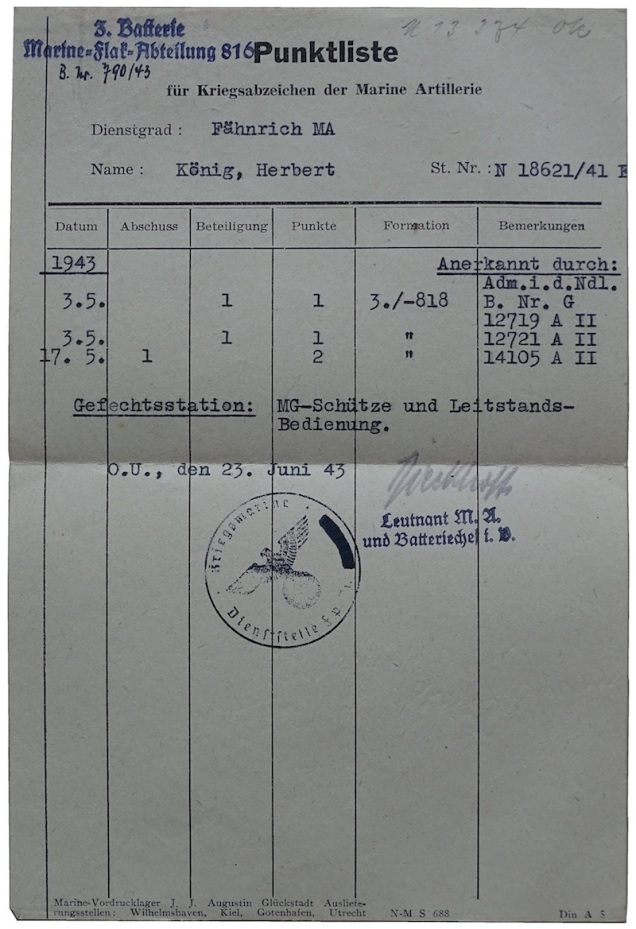 The family of the German naval officer who commanded the anti-aircraft battery which shot down Melvin Young’s AJ-A on the night of the Dams Raid have recently been in touch, and have sent me the ‘Punktliste’ form you can see above. A Punktliste (‘points list’) was kept for each battery crew, and leading to decorations if they achieved a score of eight points.

The battery was a Kriegsmarine (German navy) artillery unit, commanded by a Batteriechef. A number of batteries formed a so called Abteilung. Each Abteilung had range finders and fire direction instruments, and an officer in charge for fire control. During May 1943 this officer was Herbert Alfred Koenig, who had joined the Ersatz Ausbildungs-Kompanie (auxiliary training) in Harlem, Netherlands in November 1941. In January 1942, he was posted to Ugruko Ijmuiden, and served with both Marine Flak Abteilung 808 and Marine Flak Abteilung 816 as both a machine gunner and eventually fire control officer.

The sheet above shows Koenig’s verified ‘kills’ (Abschuss) and ‘damaged’ (Beteiligung) while serving with 3. Batterie of Marine Flak Abteilung 816 in May 1943.

The ‘Abschuss’ on 17 May refers to the shooting down of AJ-A. Koenig was credited with two points, which suggests that his battery was the only one to have fired on it. On the night of 16/17 May 1943 he was the control officer, directing the gunners, in his battery located at Ijmuiden. According to his family, he said afterwards that it was him who instructed the battery to fire when a single, low-flying bomber was spotted over the coastline heading seawards. Having crossed the coast, the aircraft increased its height slightly, and became an easier target to hit. It was in fact the first round of fire which brought it down, and if it had stayed low then it would have been a much more difficult target.

Koenig went on to serve as a naval artillery officer in two different sea-born flotillas, and spent a period after the war as a PoW clearing mines.

The two incidents on 3 May listing attacks on aircraft leading to damage are believed to refer to two Lockheed Venturas from 487 (New Zealand) Squadron. This was the result of firing during the RAF’s Operation Ramrod 16 when ten out of the eleven of the Squadron’s aircraft were shot down, and Sqn Ldr Leonard Trent received the VC.

Herbert Koenig is shown along with his wife and children in the picture below, taken in July 1944.

Thanks to Christian Koenig for the information and permission to use photographs.