…and so the immortal words of Billy Mack from Love Actually ring out as another year draws to a close.

This blog has just had its most successful year, with nearly 100,000 visits. So let me wish all of you, whether you’ve followed us from the beginning or have only recently come across us, a very merry Christmas and a peaceful and happy New Year. 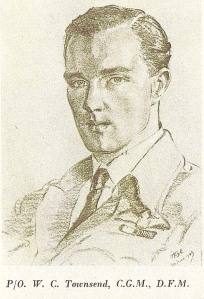 Wartime portrait by Cuthbert Orde, published in The Tatler, September 1943

The last pilot to land his aircraft safely on the night of the Dams Raid was Bill Townsend, pilot of AJ-O. He had been detailed as one of the five mobile reserves, taking off from Scampton at 0014 on Sunday 17 May. He was sent to one of the raid’s secondary targets, the Ennepe Dam, which he and his crew attacked — after three attempts — at 0337. Although it bounced twice, the mine exploded short of the dam which remained intact. They hung around for a while waiting to see if others would arrive, but then set off for home. They passed over the Möhne, saw for themselves the extent of the devastation already wreaked and then set off as fast as they could.

With dawn breaking, AJ-O had a very hairy journey back to base. As they approached Texel on the Dutch coast the Germans depressed a heavy flak gun on them and deliberately bounced shells off the water, a tactic which navigator Lance Howard later described as ‘not cricket’. (You imagine that he was being ironic, given the weapon that they had bounced off the Ennepe lake a few hours previously!) They finally landed, with only three engines working, at 0615 and were met on the hardstanding by a group of Bomber Command’s most senior officers, including AOC ‘Bomber’ Harris, whom Townsend failed to recognise and pushed past. It was however, as his crew later recalled, a piece of ‘superb flying’ which had brought them home.

After the war, Townsend had a quiet life. At one point he and his wife owned a pub, but he later worked as a civil servant, including a spell in the Department of Employment in Bromsgrove. Although he died as recently as 1991, there doesn’t seem to have been any obituary published in the national press. However one from a local (unnamed) Bromsgrove newspaper has now been unearthed by members of the WW2Talk Forum. Poster ‘Spidge’ started a thread three or four years ago trying to identify all the final resting places of the 129 Dambusters who are no longer with us, and one of his colleagues, Geoff, put up this snap:

Like so many of his generation, Bill Townsend was a modest man who rarely spoke of his part in the RAF’s most famous ever bombing operation. He surely deserves to be more widely celebrated.

Dom Howard continues to add to his impressive collection of contemporary reports of the Dams Raid. Here’s the latest, from Cleveland, Ohio, dated 17 May 1943. You can check out the full array of scans on his Photobucket page.

The British Film Institute has revamped its stills website, so that it now displays many more items from its collection. The first thing I searched for was, of course, The Dam Busters, where there are 24 items including most of the well known film stills and posters.

What is still missing, however, are those extra unused stills from cinematographer Erwin Hillier’s personal collection which turned up a couple of years ago, on which I reported at the time.