The flag of the German navy flying on the Lützow before it was attacked and sunk by 617 Squadron in April 1945. [Pic: Rudolf Ritscher/Horsley family]

Flt Lt Robert Horsley joined 617 Squadron towards the end of the war as a pilot, but he already had an earlier tour of operations under his belt in Bomber Command as a wireless operator/air gunner before retraining. He took part in a number of famous operations in late 1944 and early 1945, and went on to have an interesting and colourful post-war career. His family have kindly sent me a number of pieces of interesting material, including those shown below relating to the attack on the German battle cruiser Lützow, which took place on 16 April 1945.

Robert Horsley was born on 4 May 1921 at Poppleton near York, the youngest of the four sons of Edgar and Irene Horsley. One of his brothers, Hugh, joined the RAF and was killed when his bomber crashed shortly after take-off on its way to a sortie over Germany. The other two were in the army.

Horsley trained as a wireless operator/air gunner before joining 50 Squadron, which was then equipped with twin-engine Hampdens, at Skellingthorpe in August 1941. He flew on a number of operations before moving on to the Manchester. One of his 50 Squadron colleagues and a good friend was fellow air gunner Johnnie Tytherleigh, who later went on to fly on the Dams Raid with pilot Henry Maudslay. He flew on the first Thousand Bomber raid in May 1942, an attack on Cologne. The Manchester aircraft was in poor condition, and had to fly below its designated bombing height. Exposed to German flak, the plane took several hits.

The pilot, Flg Off Leslie Manser, decided to try to make it back to England or, at worst, reach the Channel. However the damage was so bad that eventually, at just 800 ft, he calmly ordered his crew to jump. They all baled out, but for Manser it was too late and he died when the aircraft crashed near Bree in Belgium. He was posthumously awarded the VC, and Horsley was awarded the DFC.

Horsley eventually made it back to Britain, aided by the Belgian ‘Comet’ escape line who passed Allied aircrew from one contact to another until eventually they crossed the Pyrenees into Spain. When he returned he put in for pilot training and was sent to Canada to qualify. He then worked as an instructor since he was not allowed to carry on flying over occupied Europe as he had once evaded capture there.

After the liberation of France and Belgium in late 1944, the policy was changed and Horsley was allowed to return to operational flying. He joined 617 Squadron as a pilot on 25 November 1944, with the crew seen below. Together they flew on about 12 operations by the end of the war. These included the raids on various U-boat pens, the docks at Bremen and the attack on the battle-cruiser Lützow on 16 April 1945. Reconnaissance aircraft had located this ship in the Kaiserfahrt, the canal near Swinemunde and the Baltic Sea. 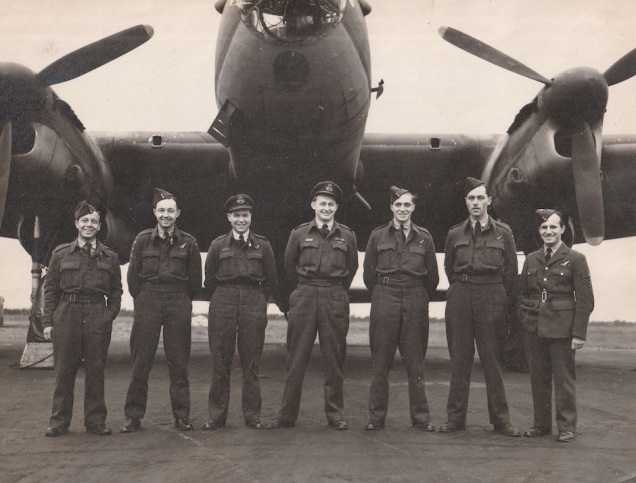 Ten years later Horsley, still a serving RAF officer, was contacted by a German ex-sailor, Rudolf Ritscher, who had been part of the Lützow’s crew. Ritscher sent Horsley some photographs, published here for the first time, and in return Horsley sent him an account of the attack, an extract from which follows.

In the letter, Horsley explained how operations on the two previous days had to be aborted because of poor weather, but then on 16 April, the attack began. Of the eighteen 617 Squadron aircraft fourteen, including Horsley, were carrying the 12,000lb Tallboy bombs.

Tactics were the same, namely, a nice straight run in, bombing between 14,000 and 16,000 feet.  The weather was perfect, not a cloud in the sky, all the way from England to the target. The wind was light – ideal for bombing. The fighter escort left us and for last fifteen minutes we were alone in the sky – eighteen Lancasters – I was in the third row on the port side of the formation. We saw you from many miles and were able to drop down to our bombing heights in plenty of time.  Five minutes from the target everything was going well, bomb fused, bombsight satisfactory, camera fready to photograph.
Suddenly flak burst all around us, accurate? Yes! Number three in the first line was hit.
My bomb aimer’s cool voice came over the inter-communication – “left, left – right, steady, steady – bombsight ‘on’ ”– Crunch, crunch went the flak – I concentrated on keeping the aircraft steady, air speed had to be correct, height exact – Bang – the cockpit canopy was blown off – “steady” said the bomb aimer – my mouth was dry, but I was determined to get the bomb on the target – “Bomb gone” shouted the bomb aimer “Keep her steady for the photograph” – another seventeen seconds at least, still the flak burst about us, the cockpit was very drafty without its top which you had blown off. We dived out of the target area. I heard one of my friends call up on the radio, saying that he had lost one engine as he was flying into bomb. When he was hit it spoilt his bombing aim so he had not bombed. I broke off from the main formation to join him and help protect him against an attack from your fighters. He missed his bombing run again and had to make another attempt before finally dropping his bomb (by that time the remaining bombers were well on their way home). I then escorted the damaged bomber back to England and was the last to land.  [Punctuation and spelling as in original.]

The Lützow had been sunk, although because the water was so shallow it wasn’t immediately obvious. Its guns remained above the water level, however, so for a number of days they continued to be used as a stationary battery against advancing Soviet forces. 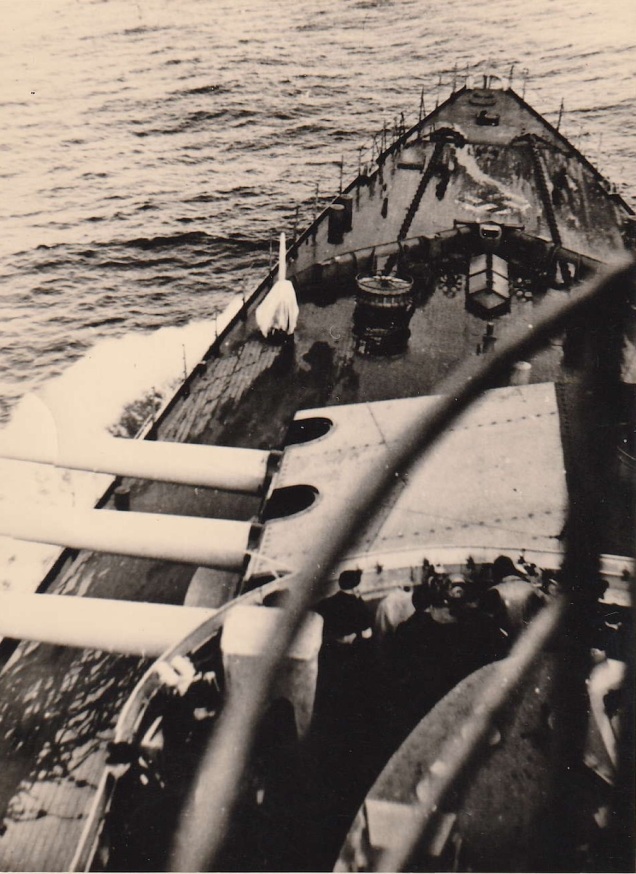 General view of the deck and one of the large gun batteries. [Pic: Rudolf Ritscher/Horsley family]

After this successful attack Horsley and his crew flew on two more operations before the end of the war. The first, on 19 April, was a massive show of strength when 900 aircraft bombed the town and naval base at Heligoland. The final act was 617 Squadron’s last operation of the war, the attack on Hitler’s ‘Eagles Nest’ at Berchtesgaden on 25 April in which 359 Lancasters took part.

After the war, Horsley was granted a permanent commission in the RAF. He converted to jet aircraft, commanded a jet training squadron and did stints at the staff college and Air Ministry. Finally he was seconded to the Foreign Office, served as Air Attaché in both Iraq and Saudi Arabia and then worked on what are euphemistically called ‘special duties’ while stationed in Beirut. He eventually retired in 1972 and moved to Australia. He died on 19 January 2016.

By coincidence Geoff Armstrong, the son of Horsley’s flight engineer, Wrt Off Edward (Paddy) Armstrong, has recently posted this image of his father’s logbook on the Bomber Command Crews and Aircraft Facebook page. It covers the crew’s operations over the same period, in April 1945.

The attack on the Lützow was the last operation of the war in which 617 Squadron suffered casualties, the loss of Sqn Ldr John Powell and his crew. You can read more about them in this post from January 2012.

Thanks to Nigel Horsley for help with this article.