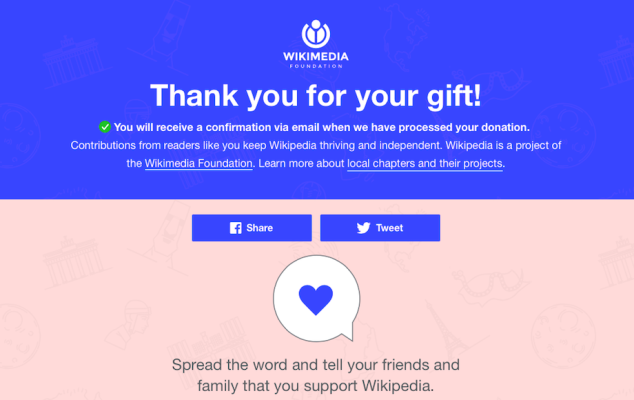 Stepping away from the normal terrain for this blog, this is a personal plea for all readers to support the annual appeal for the wonderful Wikipedia operation. I use Wikipedia every day, and every day I marvel at the breadth of knowledge and information contained in its 5,708,282 pages*. I’m sure many of you reading this feel the same – Wikipedia is the fifth most visited site on the internet, and the only one of the top five which doesn’t depend on advertising for income. It is a non-profit company, written and compiled by hundreds of thousands of contributors.

For many years, I noticed the occasional appeal for funds but never bothered with them. However, I now realise that it is vital for the future of the internet that this non-profit community-run venture survives and thrives. The original idea of the founders of the internet was to provide free access to information to anyone with a connection. Nothing exemplifies that idea better than Wikipedia. Like other community-driven ventures such as Parkrun, they are run by users rather than producers, by volunteers rather than professionals, they have a horizontal rather than hierarchical structure, and they’re not primarily about making money. All this was noted in an interesting article in Wednesday’s Guardian.

In order to survive financially Wikipedia depends entirely on voluntary support. So, if you are a regular user like me, please do what I have done for the last few years – make a small annual donation. Respond when the popup appears on your screen or go to the donation page.