I posted about this interesting (although misleadingly titled) documentary last year, when it was shown on British terrestrial TV. It shows the journey made by Sqn Ldr George (Johnny) Johnson, bomb aimer in Joe McCarthy’s AJ-T, to visit the site in Germany at which his Dambuster Lancaster crashed six months after the Dams Raid. Here it is on Youtube, in five parts.

Here’s your chance to put on your best Kenneth Williams/Hattie Jacques voice. Altogether now “Oooh, Matron! It’s …”
Other pictures on various broadcast media sites haven’t given us a true idea of the sheer size of the replica bombers which Weta Workshops have built for Peter Jackson’s Dambusters remake. Here is a cutting from an unnamed New Zealand newspaper. (Click on picture to see larger version.)
Hat tip The One Ring. 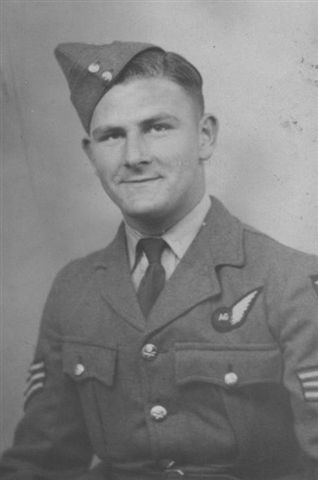 The youngest airman to take part in the Dams Raid was Sgt Jack Liddell, rear gunner in the crew of AJ-E, piloted by Flt Lt Norman Barlow. He was 18 when he took part in the raid, and lost his life along with the rest of the crew when their aircraft crashed on the outward flight near Haldern in Holland. His remains were reburied after the war in Reichswald War Cemetery.
Not a lot is known about Liddell other than the material on the Bombercrew.com website (from which I have taken this photo, credited to Eric Rundle). His parents lived in the well-known holiday resort of Weston-super-Mare in Somerset.
Jack Liddell is thought to have joined the RAF when he was only 16 (he must have lied about his age) and had undertaken a number of operations with Barlow in 61 Squadron.
BBC South West are now looking to put together a short film about Jack Liddell, and hoping to find some connections with his pre-war life in Somerset. If you can help, please contact the researcher, Charlotte Lewis.