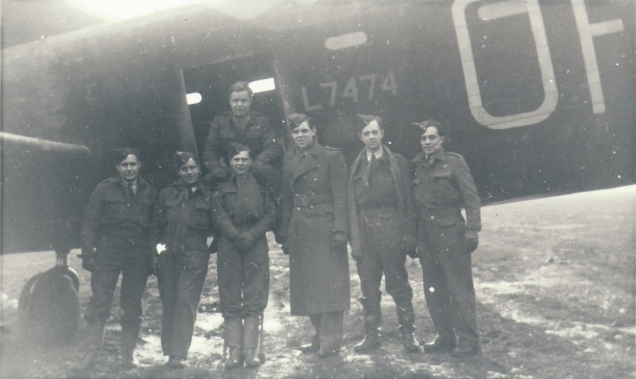 This story has only a tangential connection to 617 Squadron, as it concerns an RAF Wireless Operator/Air Gunner who died some nine months before the Squadron was even formed. The picture above, probably taken in January 1942, shows a crew in 97 Squadron at about the time they were about to fly their first operation as a newly formed unit. Most of them were newly qualified as aircrew but the pilot, Plt Off David Maltby, third from the right in the greatcoat, and next to him, second from the right, wireless operator Sgt Eric Grimwood had already flown four operations together in November/December 1941 when David Maltby was still flying as a 2nd pilot.

The others are, on the left, left to right, Sgt Max Smith (navigator), Sgt Lyle Humphrey (gunner) and Sgt Harold Rouse (bomb aimer). On the far right is Sgt Harvey Legace (gunner) and crouching in the hatch is Sgt George Lancey (2nd pilot).

The aircraft they are standing beside is an Avro Manchester, but these were soon to be phased out of front line service in favour of the more powerful, and safer, Lancaster. 97 Squadron was only the second squadron to be given Lancasters. This crew, Crew No 21, flew about another ten operations together between February and June 1942, and was then disbanded when David Maltby came to the end of his first ‘tour’, and was posted away from 97 Squadron.

Some of the crew carried on flying together as George Lancey had by then qualified as a first pilot, and took over his own aircraft. Eric Grimwood was however allocated to the crew of Flg Off WA McMurchy RCAF. Sometime on the night of 26/27 July 1942 they took off on an operation over Hamburg and were lost over the sea. This is the relevant entry in WR Chorley’s magisterial Bomber Command Losses:

A sad end, but not untypical of the fate of so many crews. Seven families in Canada and Britain received the dread knock of the telegram boy.

There is a further mystery about Eric (Grim) Grimwood – no one seems to know who his family was. His entry at the Commonwealth War Graves Commission doesn’t even name his parents, which would suggest that the RAF had no record of them. He is, however, commemorated on the Banstead war memorial so at some time he must have had family in this small community in Surrey, but no one now there knows who they were. 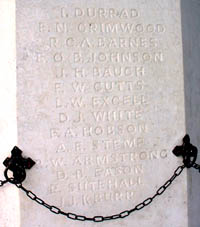 The final irony is that while five of the seven aircrew in the top picture survived the war, Maltby and Grimwood, who flew together before the rest of the crew were assembled, both died in the North Sea some 15 months and a few hundred miles apart.

If anyone has any information about Eric Grimwood or his family, please contact me.

Correction: Banstead Local History Group have contacted me to say that they now know that Eric Grimwood was the son of Frederick and Edith Mary (née Minton) Grimwood, and that his birth was registered in Southwark in 1922. They are still trying to track down other members of the family.

Liz Kingsley is an Australian scientist and film critic who runs a lovely website And You Call Yourself a Scientist! This is mainly devoted to, in her words, “mad scientist’s views on other mad scientists. And mad doctors, monsters, murderers, psychopaths, ghosts, freaks, weirdos and things that go bump all hours of the night and day” and contains dozens of reviews, mainly of “B movies”. It also has no fewer than six pages of “immortal dialogue” culled from endless hours of movie-watching.  One topical example, given the current near-hysteria over so-called Swine Flu, from The Andromeda Strain:

First politician:  The decision on 712 isn’t final. It was just postponed for 48 hours.
Scientist:  By then the disease could spread into a world-wide epidemic!
Second politician:  It’s because of rash statements like that that the President doesn’t trust scientists!

However, the site also contains reviews of some more sensible films, such as The Dam Busters, and has some interesting perspectives on the science involved.

Sqn Ldr Ted Wass died recently, and had a generous obituary in The Times. He was known to many researchers and other people with an interest in 617 Squadron from his many years’ work as the squadron association secretary, where he treated everyone with great courtesy and efficiency.
Ted could have spent the whole of his Second World War career in a relatively safe position in the RAF supply department, but chose to volunteer for aircrew and was posted to 617 Squadron as a gunner in 1944. He took part in two raids on the Tirpitz, including the one in which it was finally sunk, and a number of other high profile operations, usually in aircraft captained by Sqn Ldr Tony Iveson. He was forced to bale out over Germany in January 1944, and spent the last part of the war as a PoW. The story of this raid is told here in a story in the Telegraph last autumn about Tony Iveson. (I linked to this at the time.)

The 2002 documentary, History Raiders: The Dambusters, made for the History Channel, can now be found in its entirety on Youtube.
Part 1
Part 2
Part 3
Part 4
Part 5

It’s interesting how the documentary makers use clips from the 1955 film, without stating their source – what we would now call a dramatised reconstruction. These are mixed in with real wartime stills and film clips. Be that as it may, it is still a mainly accurate telling of the story, and well repays a repeat viewing. 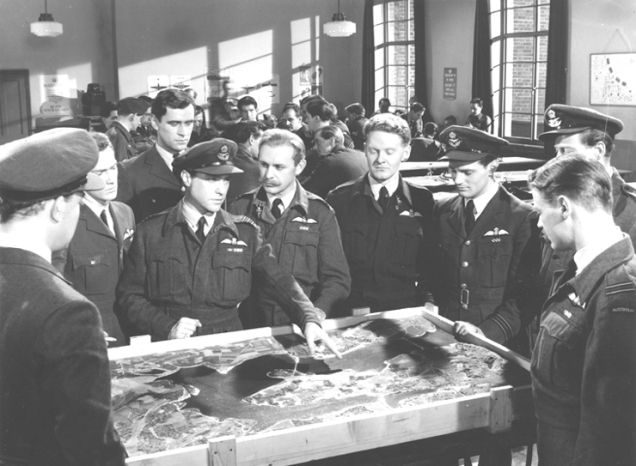 The man who, unwittingly, set me off on the track of writing a book about the Dambusters was the actor George Baker, whose birthday is today. In an interview on the BBC Radio Today programme in December 2005 he told the story of how he had been cast to play the part of my uncle, David Maltby, in the 1955 film The Dam Busters. During the making of the film Gp Capt Charles Whitworth, the technical adviser, relayed to him the information that David was sometimes so wound up after operations that he released the tension by shooting china plates with his service revolver. This was a story that no one in my family had ever heard before, and it therefore seemed to me to be important to tell more of the family history before time took its inevitable toll on us all.
In an email to me a few months later he told me how hard casting director Robert Leonard and film director Michael Anderson had worked to ensure the actors looked like their real-life characters. This was sometimes a bit confusing for poor old Charles Whitworth:

On the desk in front of them [Leonard and Anderson] they had a photo of [David Maltby] and one of me and I must admit that there was a considerable similarity. Then when I met Group Captain Whitworth he fell into the habit of calling me Dave, which was really quite disconcerting.
[Whitworth] would often refer to an incident thinking that I had been there. This is how the story of the plate shooting came to be told, quite obviously the men of the squadron became extremely tense before and after an operational ﬂight but other indications from the Group Captain told me that [David Maltby] was a very funny man and a delightful companion. I feel very honoured to have had the chance to portray him in the ﬁlm.