Joe McCarthy’s son, Joe McCarthy Jr, has kindly sent me some more information about the well-known picture of members of his father’s crew fraternising with the crew of an American B-26, taken at the Earls Colne airfield in Essex in 1944. I have previously reproduced a similar picture in the Dambuster of the Day article on Ron Batson.

Joe’s picture is a better shot obviously taken at the same time, as it doesn’t cover Johnny Johnson’s face. He also sent me a clipping from a newspaper given to him by Dorothy Bailey (daughter of Bill Radcliffe, the flight engineer in the McCarthy crew) which reproduces the same picture and helpfully includes a caption listing all the personnel:

Two more interesting points from Joe. The return flight from Earls Colne to Woodhall Spa was probably the last time that Johnny Johnson flew with the crew, as he left the squadron shortly after. McCarthy’s new bomb aimer was ‘Danny’ Daniels who went on to fly with ‘Willie’ Tait, including on the Tirpitz raid.

Next to McCarthy is the American pilot Major John Bull Stirling, another US citizen who joined the RCAF before the USA entered the war. In fact Stirling had been in the same RCAF training class in Ontario as McCarthy but he chose to transfer into the US Army Air Corps after Pearl Harbor. According to this entry on the American Air Museum in Britain website, he had an eventful time during the war and died in 1988.

In the 1960s, like many children of my age, I was an avid builder of Airfix plastic model aircraft. I made a reasonably decent job of them, but I remember the slight disappointment that the final results never quite resembled the smart looking painting on the box.

Then, one recent Christmas some 50 years after I had last opened up an Airfix box, I was given a present of a model Lancaster.

I toyed with the idea of building the model myself, but in the end my nerve failed me and I put it away in a cupboard. There it languished for a year or two, until I had an email exchange with my old friend Dom Howard, the great nephew of Dams Raid pilot Cyril Anderson. Several years ago, we had both been active on the old Lancaster Archive Forum (still much missed by those of us of a certain age) and I knew that this had a sub-forum on model aircraft. A prominent member of this had been a model builder called Ian Collis, whose pictures of his work in progress showed that he was a real ace at this kind of detailed work.

So I decided, as a treat to myself, that I would ask Ian to build the model for me. It was to be decorated with the markings which my uncle, David Maltby, had carried on his aircraft ED906 AJ-J on the night of the Dams Raid. Ian kept me informed about how he was getting on and posted the occasional shots on his Facebook page of the work in progress. Then a few days ago he put up the final series showing the completed work. Here is a link to the page on which they are displayed.

Talk about Wow factor! In every shot one can only marvel at the level of detail of his work. Here is a shot of the cockpit, front turret and bomb aimer’s position, each with an individual figure. 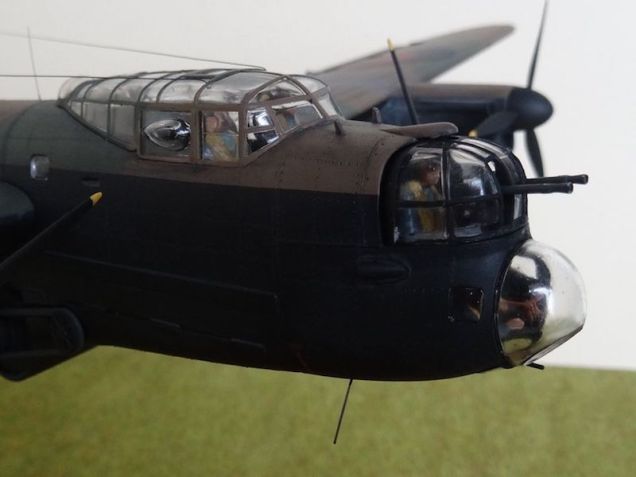 And here’s the bomb aimer himself, apparently crafted from a model soldier using a pair of binoculars, using the famous wooden bombsight, made to 1:72 scale!

I’m just overwhelmed by the pictures and am much looking forward to collecting the finished model from Ian very shortly. A masterpiece indeed.