The Dambusters Declassified documentary shown on BBC a couple of weeks ago wasn’t widely reviewed in the national press, but has been the subject of debate on a number of internet forums. One of these discussions, on a forum widely frequented by modern day pilots, had a surprising intervention from the film’s producer, Ian Cundall. Posting under the pretty cool name of ‘TVflyer’ he explained that they only had a short time to fix up the camera shots, so couldn’t get an exterior view of what it felt like to fly only 100 feet above the ground.
He countered the grumbles from some quarters that there was ‘nothing new’ in the programme:

Some of the stories told in the film are well known to aviation historians but – I’d suggest – not to most general viewers who base their knowledge of the raid on the movie.

That’s my view now, some time after transmission. When the programme finished my immediate conclusion was exactly that – there was nothing in it that I hadn’t read or heard about already. But some of the material which was used has only been previously published in pretty obscure books. One example is the story of how shot-down bomb aimer John Fraser was interrogated by the Germans, which to the best of my knowledge has only been discussed in detail in Helmuth Euler’s The Dams Raid through the Lens. It took a certain degree of bravery for his daughter Shere – a doughty defender of her father’s memory – to stand in front of a camera and say that he did reveal some details of how the weapon worked.
The only bit of the documentary which got picked up in the national press was the interview with Margaret Masters, the woman Guy Gibson was seeing in the run up to the Dams Raid. Again, this is well known to aficionados, as she was interviewed at length by Richard Morris for his 1994 biography of Gibson. But she has never spoken on camera before, which led the Mail on Sunday to cobble together a predictably  sensationalist story based entirely on quotes from the programme.
What I think didn’t work was the use of Martin Shaw as a front man for the film. He’s a good enough actor, and has a private pilot’s licence, but I don’t think this necessarily qualifies him to ‘investigate’ on our behalf. There are real experts who could have fronted the programme – one, John Sweetman, appeared as an interviewee – but, of course, they are not as good box office as a hunky middle aged actor in serious spectacles, which he was able to take off several times with a theatrical flourish.
Shaw was also absent for some parts of the film – a woman’s voice could be heard during one of the interviews – and this betrays the fact that some parts were cobbled together from other BBC projects. Long term readers of this blog will know that as far back as June 2009 a BBC South West researcher had contacted me looking for information about the youngest Dambuster, rear gunner Jack Liddell. The last 15 minutes or so of Dambusters Declassified appeared to be made up of this material, tacked onto the end of Martin Shaw’s description of the difficulties of low flying.
Ultimately, it was a serious programme, with some interesting material, and well worth catching again if you can find it on iPlayer or other sources. 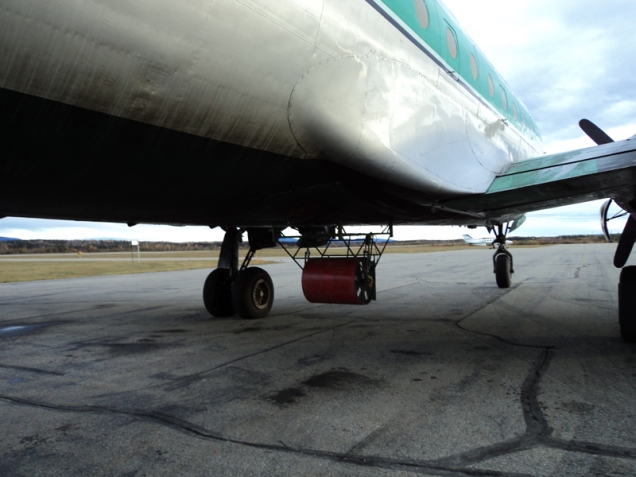 Here’s a bigger and better version of one of the pictures snapped recently in Mackenzie, British Columbia. It shows the bouncing bomb underneath a vintage DC4 (not DC3, sorry!) of Buffalo Air. See below for the full story.
No word yet when the production company involved, Windfall Films, expect to release the documentary. All they would tell us is that it will be ‘sometime next year’.

I can only attribute it to the Dambusters double header shown on BBC2 last night, but I have just seen the biggest ever single “spike” in views of this blog. Nearly 1300 people found their way here yesterday, and a further huge number this morning, so if you are amongst them, then welcome. This is, as far as I know, the only regularly updated Dambusters blog or website anywhere on the whole interwebnet. I like to think that it’s a good source for information about 617 Squadron’s wartime exploits, and all the things that have flowed from the fact that the Squadron was responsible for the RAF’s single most famous bombing operation of the Second World War.
In the 30 months I have been running this blog, I can tell you that the most searched-for information has always been “Dambusters remake”. Thousands of people want to know when this will come out. (For the benefit of people new to this, a remake of Michael Anderson’s 1955 classic has been on the cards since 2006 – it is being produced by Peter Jackson of Lord of the Rings fame, from a script by Stephen Fry, the well known National Treasure. The film was to be directed by Christian Rivers, though there are some reports that he has now left his native New Zealand to work on other projects in the USA.)
The answer as to when the remake will come out, as I write in October 2010, is that we simply don’t know. Jackson’s outfit, Wingnut Films, has a code of secrecy akin to that of the Vatican’s College of Cardinals, and all we can say is that he will tell us in his own good time.
Finally, you might ask what are my credentials for writing this stuff. I’ve spent all my working life as a writer, editor and designer, but I have a family interest in the Dambusters. My uncle was David Maltby, pilot of the fifth aircraft to attack the Möhne Dam on 17 May 1943, dropping the bomb which caused its final breach. (He is played in the 1955 film by none other than George Baker, then an unknown young actor.) Sadly, David was killed four months after the Dams Raid, along with all his crew, when their aircraft crashed after being recalled from an aborted attack on the Dortmund Ems canal. In 2008, I wrote a book about David, his life, and the lives of his crew and the effect that their deaths had on all their families which is, as they say, available in all good bookshops – or online here.
I’d welcome your comments, news and any other information you want to share.
You can get in touch with me here.

One of the spectators at the bouncing bomb drops on Williston Lake (see post below) was none other than Grant MacDonald, rear gunner in Ken Brown’s crew on the Dams Raid. Here he is, on the left, with two of the Buffalo Air staff. 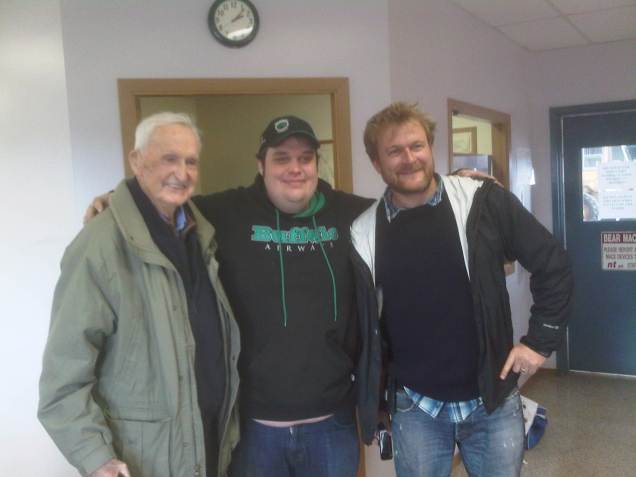 Great excitement in Mackenzie, British Columbia, Canada which is nearly 600 miles from Vancouver and an even longer distance from anywhere else. This small township lies on the southern end of Williston Lake, a huge man-made lake, the seventh largest reservoir in the world.
The lake is more than 150 miles in length – plenty of space in which an aircraft can practice flying low over water. And that is what one Canadian pilot working has been doing over the last few weeks.
That’s because a film crew has been in town. They have been working for the British company Windfall Films, which is making a new documentary about the Dams Raid. (A while back, the same company made an earlier film about the raid.) You might think that not a lot more can be said about this (a recent BBC documentary promising new information produced little) but it seems that no one has ever tried making a cylindrical bomb, rotating it backwards and dropping it from an aircraft flying at 240mph from a height of 60 feet. Until now.
There are now only two airworthy Lancasters left in the world. However, there are quite a few more of their 1940s contemporary, the Douglas DC3, which has proved so durable that they are still actively used by a number of small airlines. One of these is Buffalo Air, an outfit which flies out of Yellowknife in Canada’s Northwest Territories, a thousand miles north east of Mackenzie. This company’s staff are well used to the demands of filming as they star in a reality TV show, Ice Pilots. So Windfall chose them for the attempt to recreate the dambusting bomb, and had a dummy bomb and release mechanism built.
A number of test flights were undertaken, with  the pilot reporting that he had no problem getting the plane down to 6o feet above the lake, although he wouldn’t have wanted to try it at night.

The bomb was spun up before take off, reaching a speed of about 2000 rpm. By the time the aircraft had taken off and reached the lake it was still spinning. Everything then went swimmingly – the bomb was dropped, it bounced three or four times, ran up to the parapet wall which it struck just above the waterline and then rolled down the wall. No word yet when Windfall expect to show the film. We will keep you informed! 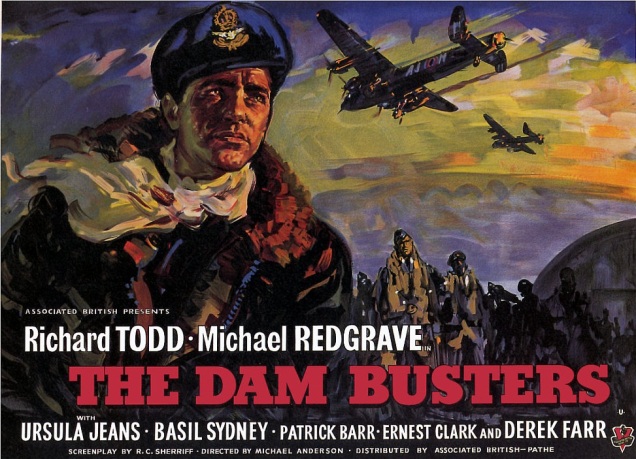 … you’ve never seen it before, or you don’t have it on video/DVD, there will be another chance for UK viewers to see the original 1955 film The Dam Busters tomorrow night, Sunday 17 October, at 11.30pm on BBC2.