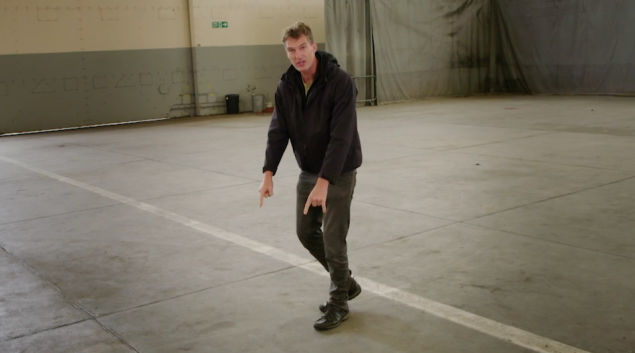 Dan Snow, on the wrong spot.

Last week’s three-part documentary series, broadcast on Channel 5, had a number of errors. A major one is discussed here.

This concerns the near catastrophe caused when the Upkeep mine was dropped accidentally onto the ground from Mick Martin’s aircraft AJ-P soon after it had been loaded by the squadron’s armourers. This did not take place inside a hangar, as so energetically described by Dan Snow in the programme, but several hundred yards away in the open air on each aircraft’s concrete hardstanding. Wartime bombing-up, as the process was called, never took place in the confined space of a hangar. It was simply too dangerous.

It is true that Martin and some of his crew, including bomb aimer Bob Hay, were inside AJ-P checking that things had been loaded correctly when the incident occurred. What followed was memorably described by Paul Brickhill in his 1951 book:

“… a fault developed in the bomb release circuit, the release snapped back and there was a crunch as the giant black thing fell and crashed through the concrete hardstanding, embedding itself 4 inches into the earth below. …
‘Release wiring must be faulty,’ Hay said professionally, and then it dawned on him and he said in a shocked voice, ‘it might have fused itself.’ He ran, yelling madly out of the nose, ‘Get out of here. She’ll go off in less than a minute.’ Bodies came tumbling out of the escape hatches, saw the tails of the armourers vanishing into the distance and set off after them. Martin jumped into the flight van near by and, with a grinding of gears, roared off to get Doc Watson. He had his foot hard down on the accelerator and swears that a terrified armourer passed him on a push-bike. He ran into Watson’s office and panted out the news and Watson said philosophically, ‘Well, if she was going off she’d have gone off by this.’ ”
Paul Brickhill, The Dam Busters, Evans 1951, pp71-72

It’s not mentioned by Brickhill, but it seems that WAAF officer Fay Gillon was also on board AJ-P at the time of the accident. She was a friend of Martin and his crew, and was being given a tour.

For the record, two other smaller errors:
Episode 2: Only two models of the targets were shown to the crews at the briefing (and earlier to Gibson). These were of the Möhne and Sorpe Dams. The Eder Dam model wasn’t completed until after the raid.
Episode 3: Martin was not the first to touch down at Scampton after dropping his mine. He arrived at 0319. Maltby arrived eight minutes earlier, at 0311. 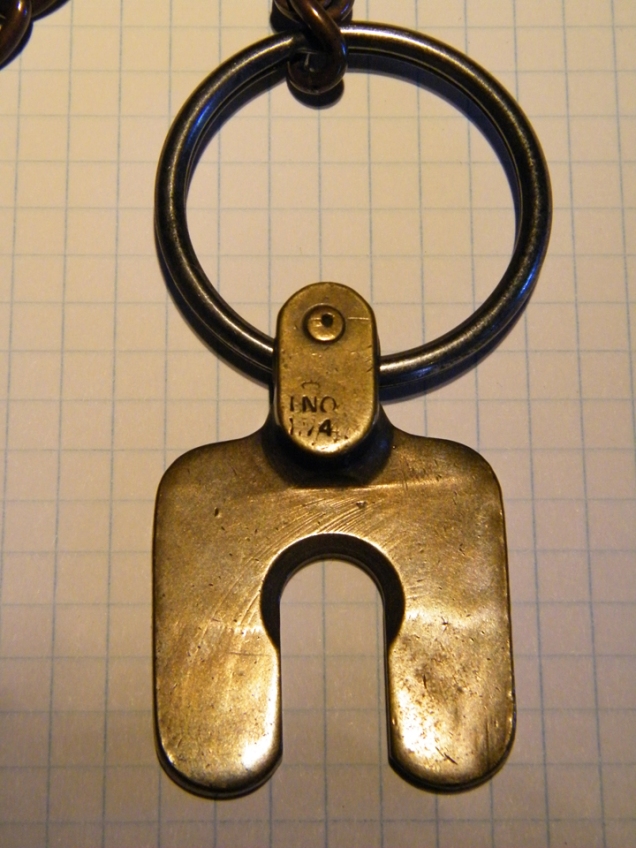 Key used before the Dams Raid to prevent the Upkeep mines from being detonated prematurely. [Pic: Watson family]

Irene Thornton, the daughter of Flt Lt Henry (‘Doc’) Watson, 617 Squadron’s Armaments Officer at the time of the Dams Raid, has been in touch. She has one of the ‘keys’ which were used before the raid to stop the Upkeep mines being prematurely detonated. Her father retained one as a souvenir. Another one was sold in 2010 and a third was given by the family of Group Captain Ivan Whittaker (the engineer in AJ-P) to the museum at RAF Halton.

Henry Watson was born on 16 September 1914 in the mining village of Fishburn, Co. Durham. He did not want to follow his brother down the local mine; he wanted to be an RAF pilot. But when he found that his vision was not up to the standard required, he chose to apply to the Technical Training School at RAF Halton. He entered in January 1930, and became an armament fitter. 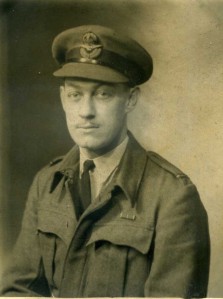 He was Mentioned in Dispatches twice before receiving an MBE in June 1942. Part of the citation read:

“This Warrant Officer has been in charge of the Armament Section since February 1941. It has been due to his untiring efforts that operations have never been delayed despite short notice of bombing up or last minute changes of bomb load.…. On a recent occasion when an aircraft crashed on the aerodrome, he was immediately on the spot and rendered great assistance to the Station Armament Officer by rendering the bombs safe without regard to his personal safety.”

Watson was commissioned in early 1943, and then posted to the new 617 Squadron being established at Scampton. He soon found that he had a completely new weapon to deal with: Barnes Wallis’s ‘bouncing bomb’, which was being tested under very strict security.

Or so it was thought. But on 2 May 1943 when Watson returned from a three week attachment at RAF Manston testing out the weapon he was called into Guy Gibson’s office to report on progress. Gibson was very perturbed by some of what Watson told him, and sat down to send a handwritten report to 5 Group Headquarters. He had himself been told to maintain the utmost secrecy, and so obviously didn’t even want the details communicated to a typist.

(1) Within three days of arriving at Manston, P/O Watson was shown a file which I think you have seen. This contained:

a. Sectional drawings of certain objectives
b. A map of the Ruhr showing these objectives
c. Various secret details in connection with Upkeep.

(2) That P/O Watson, an armament officer in this squadron, thus knows more about this operation than either of my Flight Commanders and at the time, more than I did myself.

I have had a long talk with this officer and am satisfied that he understands the vital need for security, and the disregard of security will lead to most distressing results. But I consider that there is no need for a squadron armaments officer to be given such information.

P/O Watson, tells me moreover, that he read this file in company with a F/O Rose, who belongs to 618 Squadron, Coastal Command. This officer is engaged in the same type of work as ourselves, but has no connection with any matter concerning Upkeep.

P/O Watson informs me that he was shown this file by W/C Garner of M.A.E.E. In fairness to W/C Garner I should like to point out that he has been doing excellent work whilst he has been in charge of the trials at Manston. However, I do feel that the more people who know, the looser the security will be. [AIR 14-595. Punctuation and spelling as in original.]

At the bottom of the page there appears in Gibson’s writing the phrase ‘Seen by me’. Underneath that is Watson’s signature. So it would seem that Gibson wanted to make sure that Watson knew the importance of keeping the secret by getting him to sign the memorandum.

After the raid, Watson took part in the official celebrations. He and the other technical officers were presented to the King on the royal visit to Scampton on 27 May 1943. He also travelled to London for the investiture, and was at the dinner in the Hungaria restaurant which followed. 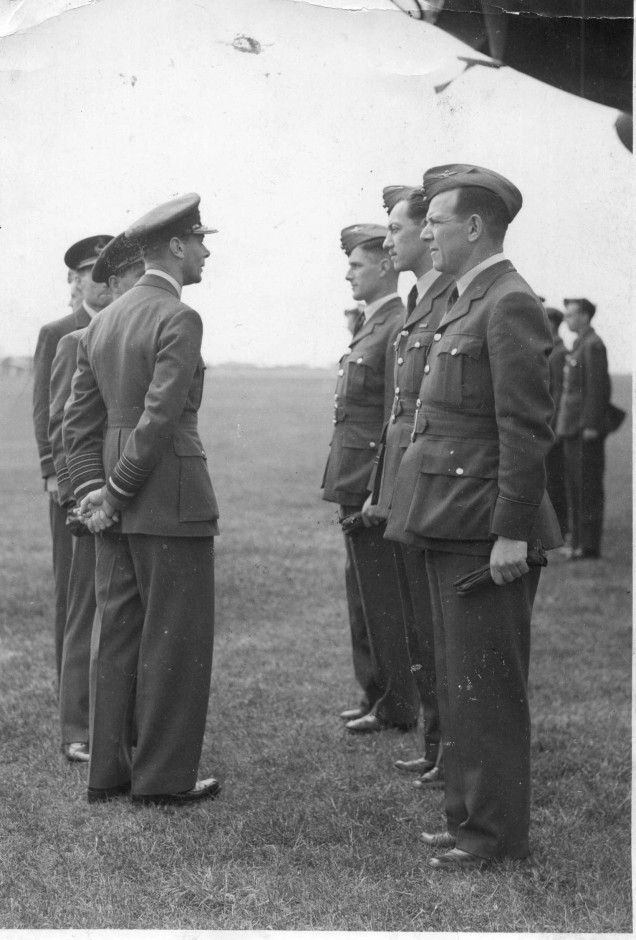 Watson remained with 617 Squadron until December 1943, but was then posted to India to serve in 355 and 356 Squadrons, flying American-built Liberator bomber. After the war he went back to working in engineering. He started again as a fitter and turner at a factory in Stockton-on-Tees but rose within 10 years to become its manager. He went on to be the MD of a larger company and established its Apprentice Training School in Ipswich.

[Thanks to Irene Thornton and the Watson family]