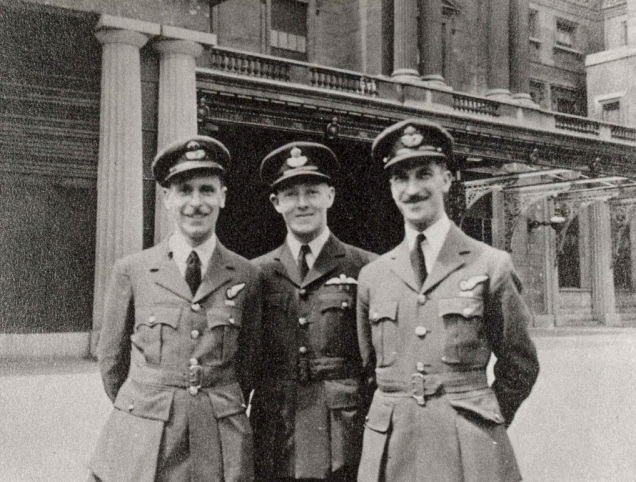 There were two bomb aimers called Johnson on the Dams Raid, something that occasionally causes confusion. A third bomb aimer was called Johnston. In the inevitable way of things in the wartime RAF, both Johnsons were also known to their friends and colleagues as ‘Johnnie’ (EC Johnson’s preferred spelling). The older of the two was Edward Cuthbert Johnson, bomb aimer in Les Knight’s crew, who was born in Lincoln on 3 May 1912, the son of Herbert and Jessie Johnson.

His father was killed on the Western Front in 1914, when the family were living in Gainsborough. He was then educated at Lincoln Grammar School. On leaving school, he worked for Woolworths and then the catering firm, Lyons.

After marrying May Beckwith in 1936, he moved to Blackpool to work in a boarding house business in Blackpool with her family. Their son, Philip, was born in 1938.

He joined the RAF in 1940, qualified as an observer/bomb aimer in early 1942, and was commissioned. After further training he was posted briefly to 106 Squadron, but then sent back to a training unit to be crewed up with Les Knight and his colleagues. They moved to 50 Squadron in September 1942, and Johnson flew on some twenty-two operations with the Knight crew.

Johnson and Hobday were the elder statesmen of the Knight crew, both nine years older than their skipper, and senior to him in rank. But they worked well as a team, each obviously seeing in the younger man the qualities of an outstanding pilot. All three were decorated for their role in the Dams Raid, Knight getting the DSO and Johnson and Hobday the DFC, and were photographed together outside Buckingham Palace on the day of the investiture.

In September, on the fateful Dortmund Ems operation, Johnson jumped from the stricken Lancaster when ordered to by Knight. He yelled: ‘Cheerio boys. Best of luck. See you in London.’ He recalled later: ‘The farewells were a little hasty but lacked nothing in sincerity for that.’ Like four of his colleagues, Johnson successfully evaded capture and reached the safety of Spain, with the help of a friendly Dutch farmer and policeman, and various members of the resistance in Holland, Belgium and France. He returned to the UK via Gibraltar. He served out the rest of the war in various ground postings, and left the RAF in 1947.

He went back to Blackpool, and joined a company selling fireplaces, where he worked until his retirement. Edward Johnson died in Blackpool on 1 October 2002.

More about Johnson online:
Obituary in the Daily Telegraph

7 thoughts on “Dambuster of the Day No. 61: Edward Johnson”