The memorial for Squadron Leader Henry Maudslay DFC and his crew of Dambuster Lancaster ED937 AJ-Z was unveiled in Emmerich am Rhein, Germany, on Friday 17 May, 76 years from the day that the aircraft was brought down by ground fire on its return from attacking the Eder Dam.

AJ-Z was the second Lancaster to attack the Eder but for some reason the Upkeep “bouncing bomb” was released too late and hit the top of the dam, detonating under the aircraft. Although undoubtedly damaged by this, Maudslay and the crew limped towards home but flew off course near the Dutch border flying over an oil installation on the banks of the Rhine, which was defended by anti-aircraft guns.

There were no survivors and all seven crew are now buried in the Reichswald Commonwealth War Graves cemetery. 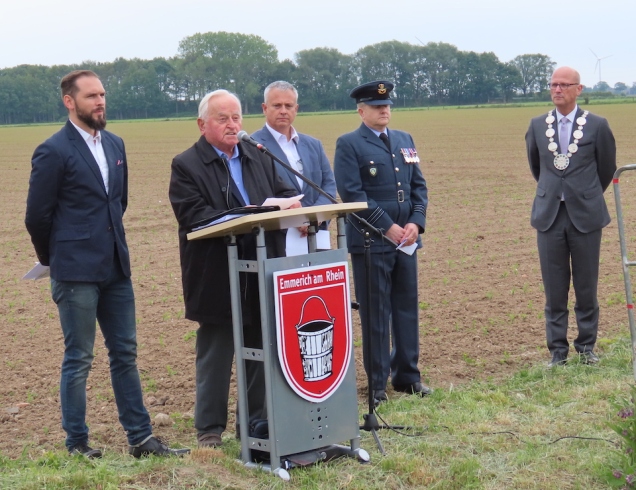 The event was organised by local researcher Marcel Hahn from Germany and Mark Welch from England. They met at another memorial event a few years ago and decided to work together to ensure that the last remaining Dambuster crew had a memorial placed at the spot their aircraft came down.

Marcel said: “This was one of the most important days of our lives. I was so happy that so many people joined us. It was very emotional for us to have some members of the crew’s families here today. It is a sign of peace, cooperation and reconciliation.” 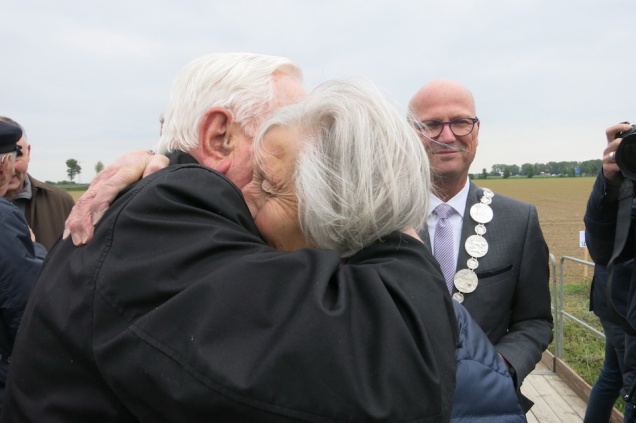 Maudslay’s niece, Victoria Trevelyan, embraced Johannes Doerwald telling him: “I don’t want you to feel guilty. I would have done exactly the same for my country if I was in the same situation.” Pics: Melvin Chambers

This sentiment was powerfully demonstrated when Victoria Trevelyan, the niece of the pilot, embraced Johannes Doerwald, who served in the gun crew which felled the aircraft, telling him “I don’t want you to feel guilty. I would have done exactly the same for my country if I was in the same situation.”

Johannes Doerwald was a 16 year old gun-layer on the night of 17 May 1943 and was credited with bringing down the aircraft. In his thought-provoking speech, Johannes said: “I still remember well the moonlit night of 16-17 May 1943, when the catastrophe at the dams happened. A four-engined bomber flew past us at low altitude towards the Möhnesee. I cannot forget the sight of this colossus. When the gunner released ‘fire’ I was so excited that I had forgotten to put the safety lever around. The machine flew so low that it collided 20 km from here with a high voltage line. Then on the return flight came Lancaster ED937. I still recall today how it was hit by the tracer ammunition. That night, 53 young people, who still had their lives ahead of them, died. Such a cruel war must not be repeated.”

Mr Peter Hinze, the Burgomeister of Emmerich, welcomed the guests in English before a speech by RAF representative Wg Cdr Paul Withers from the NATO Combined Air Operations Centre in Uedem. Addressing the audience in German and English Wg Cdr Withers said:

“Henry Maudslay and his crew gave their lives attempting a difficult and dangerous mission in the hope that it would contribute to bringing to an end one of the darkest periods in European history. Since the end of the war, Europe has enjoyed relative peace and stability.”

He added: “It has done so because post-war reconciliation led to strong bonds of friendship between former enemies, aided by a strong NATO alliance. That this memorial stone has been created is evidence of the strength of those bonds of friendship and it is a fantastic tribute to the crew of AJ-Z.”

Mark and Marcel then paid tribute to each of the individual crew members before a minute’s silence was observed and the memorial stone was unveiled.

Many local people came to the event. There were also representatives from six NATO nations, including Polish Brigadier General Slawomir Zakowski, who is the Deputy Commander of the Combined Air Operations Centre. Also attending were other family relatives of the aircrew, including 86-year old Norma Bagshaw, the niece of flight engineer Sergeant John Marriott DFM and Susan Maudslay-Maguire, Angela Gardiner, Victoria Trevelyan and Nigel Maudslay, the nieces and nephew of Squadron Leader Maudslay DFC.

Mark Welch reads a tribute to each of the crew of AJ-Z while Marcel Hahn displays a picture. Pic: Danielle Roubroeks 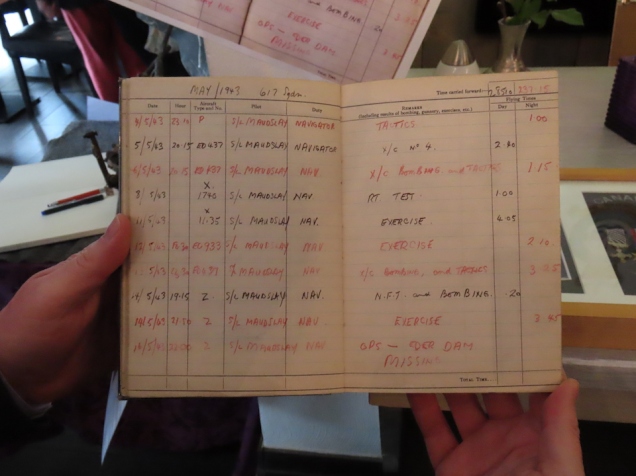 Flg Off Robert Urquhart’s logbook displayed for the camera. The logbook is now owned by Simon Muggleton. Pic: Wim Govaerts

The crew of AJ-Z remembered on a banner. Pic: Danielle Roubroeks

10 thoughts on “Emotional unveiling in Germany of AJ-Z memorial”