Guest post.
Long time friend of this blog Susan Paxton has recently been to Queensland, Australia, on a trip to find out more about the life of Flg Off Charlie Williams DFC, wireless operator in the AJ-E crew which took part in the Dams Raid.
Text and all new photos by Susan Paxton. 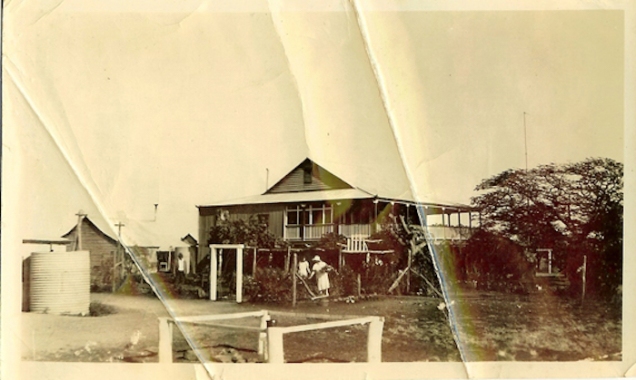 Telemon in the early 1930s. The poinciana tree to the right; in the garden Mrs Williams and daughter Sheila. Possibly H.E. Williams standing to left. Fenced rain gauge in the foreground. Photo taken by Charlie Williams. [Pic: Williams family]

On the morning of 25 March 1919, Matthew Macalister, the elderly manager of Telemon Station, located in Flinders Shire not too far, in bush terms, from Hughenden in Queensland, stepped out to walk to the shearing shed, promising to return for lunch. When he did not, someone went to check on him and found that he had never arrived. Word was sent to neighboring Marathon Station and a search effort hastily organized. All through the night the search went on, but it wasn’t until 8 am that a drover found Macalister where he’d fallen, dead of a heart attack or stroke.

Local writer “Bill Bowyang” noted in his regular column “Along the Track,” printed in the Townsville Daily Bulletin, “…the owners of Telemon will seek afar for the man to fill his place.” But in fact the owners of Telemon did not have to search far at all, for, from a nearby station they also owned, Tamworth, they tagged the manager, Horace Edward Williams, to take Macalister’s place. H.E. Williams brought with him his wife Helene, his daughter Sheila, and his two sons, Doug and Charlie.

Charles Rowland Williams, future DFC, had just turned ten when his family moved to Telemon, widely felt to be one of the finest sheep stations in Queensland, with 60,000 acres of freehold. Situated on a low hill above the Flinders River floodplain, the station homestead was beautifully located, but too small. Horace immediately set about improvements, starting by jacking the existing single-storey house up. A concrete floor was poured and a first storey built under, creating a house that was both spacious and, for the bush, elegant. Shady verandas encircled most of the first and second storeys; a spreading poinciana tree grew in the front. Stone walks were laid and gateposts marked the entrance; the usual scatter of station outbuildings spread out to one side and behind, along with a water tank on an iron stand to provide piped water. It was here that, for the next fourteen years, Charlie Williams would live and learn his trade as a station manager.

Good things do not last. In the spring of 1933 Telemon was sold, and the Williams family lost their place. The house likely sat empty for a time since Telemon was merged with adjacent Marathon. In 1948 the Stewart-Moore family bought Telemon to add to their property, Dunluce, and for several years lived there until they decided it was more practical to live at the Dunluce homestead, closer to the new Flinders Highway and the existing railroad. For a few years into the 1960s a boundary rider lived in the house; it must have been a lonely existence. Finally, the house was left to the elements.

In March 2019 my search for CharIie Williams brought me to Telemon, almost exactly 100 years since the Williams family arrived. What is left is saddening. Sometime probably in the 1980s, unheard by human ears, the house collapsed, and all of the outbuildings have followed suit. The hill is crowned with shapeless piles of broken, weathered wood, and the paddock around is littered with scattered corrugated iron sheets blown here and there by the occasional storms. Now and then a landmark can be spotted; the iron frame that supported the water tank, the flagstone walkway, one of the gateposts. 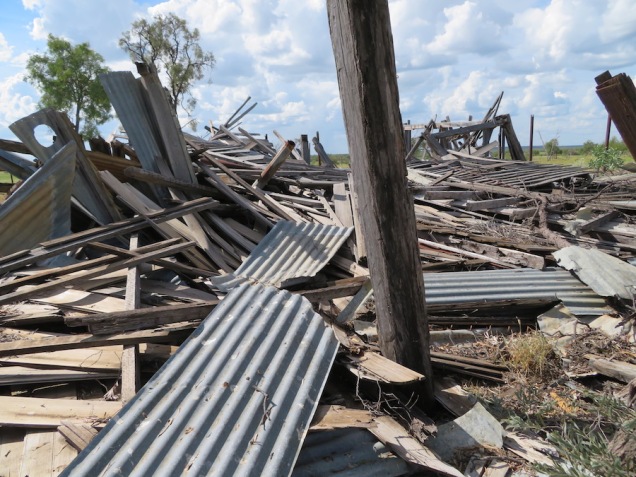 It is quiet there; the only sounds are the wind, the lowing of cattle, the sudden sound of disturbed locusts whirring away. Possibly if one had time to sit on the rocky ground, back against the one standing gatepost, and just listen, you might hear voices, or music. There was life here once; Charlie’s photo albums show costume parties, tennis matches, New Year’s celebrations, boating on the waterholes. The local papers record how the town folk from Hughenden would come here to play cricket against the country dwellers. Now, it is silent.
Charlie Williams, killed on 16 May 1943 in the raid on the dams, is buried a world away, in Germany. I suspect some of his heart remains here. 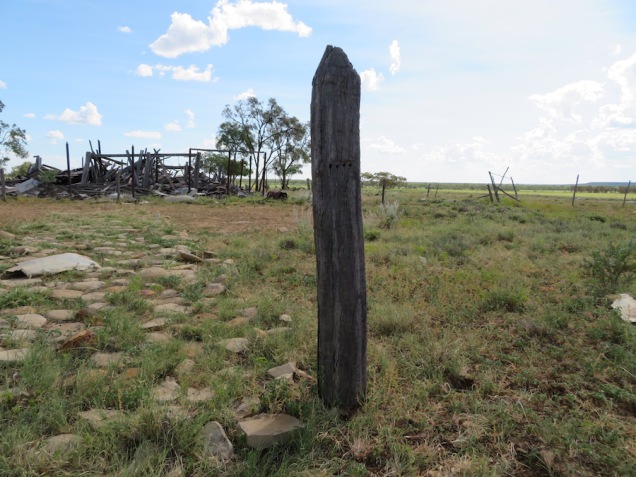 The remaining gatepost and traces of the flagstone path to the front door, with the house beyond. 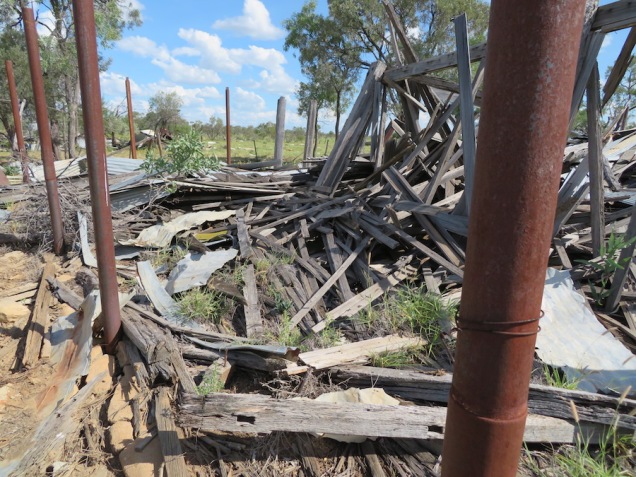 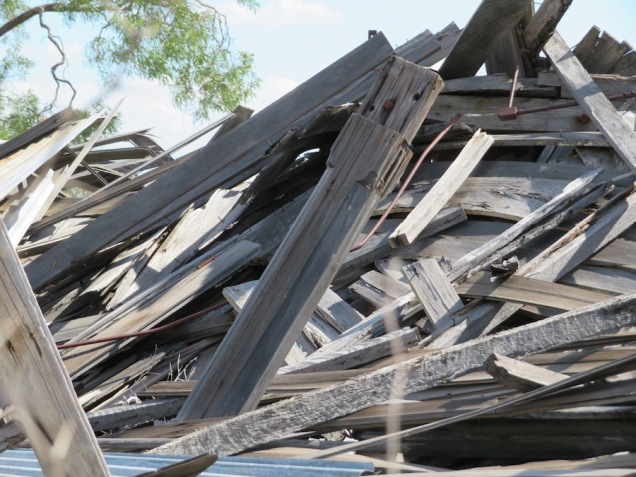 One of the few identifiable features, the large post leaning to the right here stood in the living room. 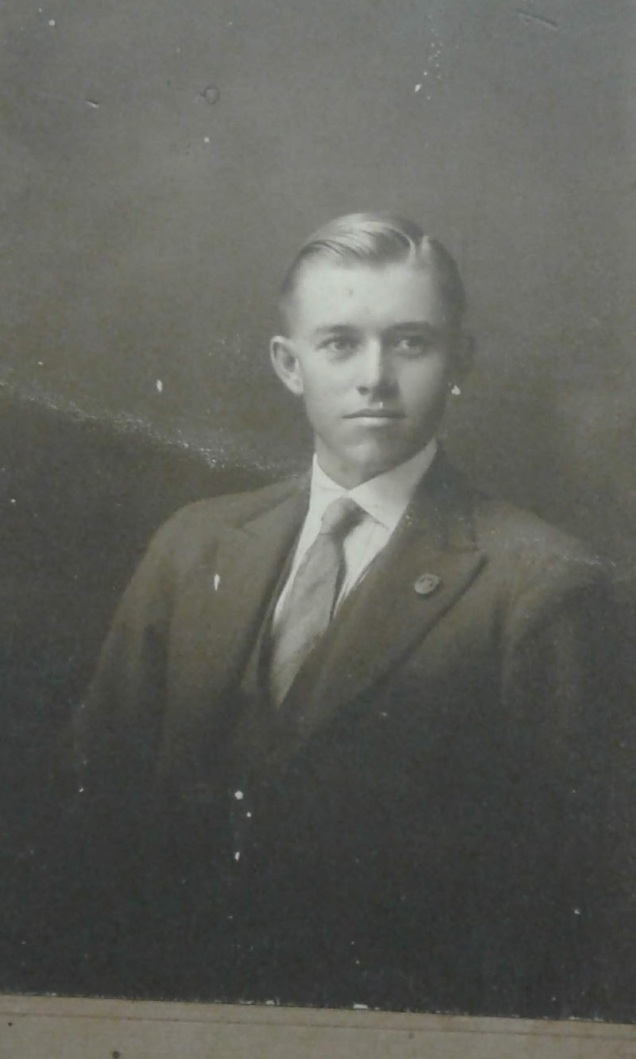 Charlie Williams, aged about 20, photographed on a trip to Townsville. [Pic: Williams family.]

My visit to Telemon was made possible by Helen Williams-Brown, who accompanied me on a whirlwind tour of what I insisted on calling “Charlie Williams country”; by Jack Stewart-Moore, whose property Dunluce subsumes the old Telemon ruin and who gave us permission; and by his manager Mark Williams, who was our gracious guide to the site.

3 thoughts on “In Charlie Williams country”