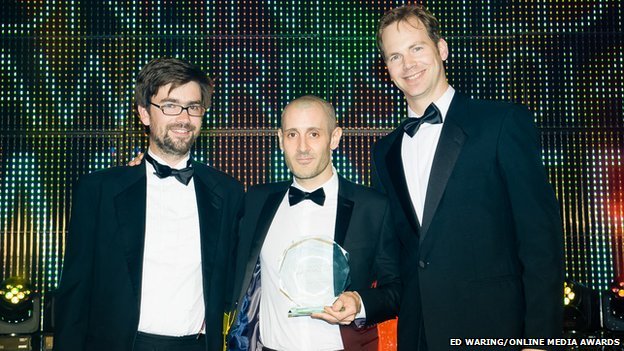 Congratulations to Greig Watson, pictured above right, from the BBC East Midlands newsteam, who has won a special award in the 2014 Online Media Awards for the team’s project to build a complete pictureboard of all 133 aircrew who took part in the Dams Raids. The judges praised the East Midlands website, which won the Best Regional News award, for being well organised and timely with a good range of features, and singled out the Dambusters story for special mention, recognising the historical importance of the work.
The Dambusters Blog is very proud to have been associated with this project, and once again we would like to thank all the relatives and others who provided pictures for this site, and thereby have built a permanent online Dambusters memorial. As  James Lynn from BBC Online News England said:  “As well as being a fantastic piece of journalism, it also feels like a fitting tribute to those who took part in the raids, and a genuine historical resource.”