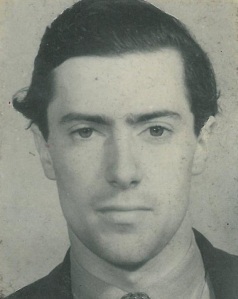 Henry Eric Maudslay was born in Leamington Spa on 21 July 1921, the third child of Reginald and Gwendolen Maudslay. His family came from a background in industry: his great-great-grandfather, also Henry Maudslay, was a nineteenth-century inventor, important enough in the history of the British Industrial Revolution to be commemorated on a postage stamp in 2009. Following on the family tradition, his father had founded the Standard Motor Company in the early part of the twentieth century. 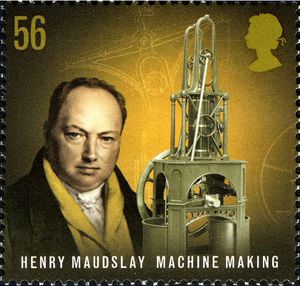 Like many boys from his background, Maudslay was sent away to board at a preparatory school at a young age. He went to Beaudesert School in Minchinhampton, Gloucestershire in 1930 and from there to Eton in 1935. His father died shortly before he left Beaudesert. Maudslay excelled at both athletics and rowing at Eton, winning both the mile race and steeplechase several years in succession and rowing in the college’s First VIII.

The war started as he entered his final year at school. Maudslay had been determined to join the RAF for a while, and had planned to sit the exam to enter RAF Cranwell as an officer cadet. However, the war put paid to that, and in May 1940 he volunteered directly. He was called up in July 1940, and sent to Canada for his pilot training. He returned to England in February 1941, and was given his first operational posting with 44 Squadron at RAF Waddington, flying Hampdens. There he flew on twenty-nine operations, and won the DFC for a single-handed attack on two enemy cargo vessels.

In December 1941 he was attached with other members of 44 Squadron to Boscombe Down to carry out service trials and work with the new Avro Lancaster. He carried on in various training roles until he returned to operations with 50 Squadron at Skellingthorpe on New Year’s Day 1943, flying Lancasters. All six of the crew he eventually brought with him to 617 Squadron flew with him at some time in the thirteen operations he undertook over the next three months, although they only appear to have all flown together as a complete crew four times.

Maudslay was promoted to Squadron Leader and became B Flight Commander of the new 617 Squadron. As Guy Gibson was often absent on important meetings, a lot of the organisation of training fell to him and Melvin Young, the other flight commander. Shortly before the Dams Raid Henry Maudslay witnessed his friend Bill Astell’s will. The Australian pilot Norman Barlow was the other witness. All three would be lost on the raid.

Maudslay made three attempts on the very difficult Eder Dam. The last was at 0145 when his Upkeep mine was dropped too late and exploded on hitting the parapet of the dam without bouncing. This may have damaged his aircraft. Gibson asked if he was OK, and Maudslay’s faint reply was ‘I think so, stand by’. Maudslay nursed his damaged aircraft slowly back towards the Dutch border, but his luck ran out near Emmerich at 0243, when he was shot down. AJ-Z crashed in a field in the Osterholt area.

Henry Maudslay and his crew were buried in the military cemetery in Düsseldorf North Cemetery and were reinterred in Reichswald Forest War Cemetery after the war.

One of the flak gunners who shot down the Maudslay crew was Johannes Doerwald, seen below meeting this blog’s author in June 2013. 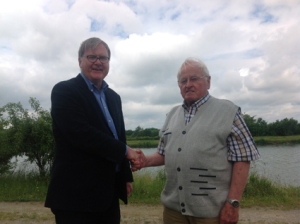 Further information about Henry Maudslay and the other 132 men who flew on the Dams Raid can be found in my book The Complete Dambusters, published by History Press in 2018.

One thought on “Dambuster of the Day No. 43: Henry Maudslay”