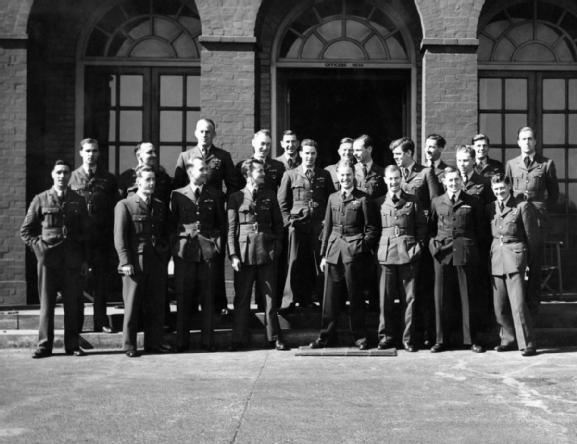 Group picture taken outside Officers’ Mess at Scampton, 17 May 1943. Jack Buckley is third from the right in the front row, standing between David Shannon and Les Knight. [Pic IWM HU91948]

Jack Buckley was one of the most experienced air gunners in 617 Squadron, and one of only eight already commissioned by the time of the Dams Raid. The only son of Hubert and Lucy Buckley, he was born in Bradford on 1 May 1919. He attended Salt’s High School in Saltaire, and then worked in the wool trade. He joined the RAF at the outset of war and after training went first to 225 Squadron, and then later to 75 (NZ) Squadron. In the latter, he flew thirty-five operations, mainly with Plt Off Fisher as pilot. He was commissioned in June 1942, and then transferred to a training unit.

Buckley became an important part of the squadron’s social activities. Len Sumpter remembered him as owning a racing car, and also usually having a pint in his hand. This reputation looks to have been cemented by the famous ‘morning after’ picture, taken on the steps of the Officers’ Mess on 17 May 1943. Buckley is obviously laughing out loud – perhaps affected by a combination of quite a lot of booze and no sleep.

He was awarded the DFC in July 1943 and flew on several more operations with Shannon. In the summer of 1944, he went back to training and remained there to the end of the war.

After the war, he resumed his career in the wool trade, and died in Bradford on 6 May 1990.

Further information about Jack Buckley and the other 132 men who flew on the Dams Raid can be found in my book The Complete Dambusters, published by History Press in 2018.

7 thoughts on “Dambuster of the Day No. 42: Jack Buckley”