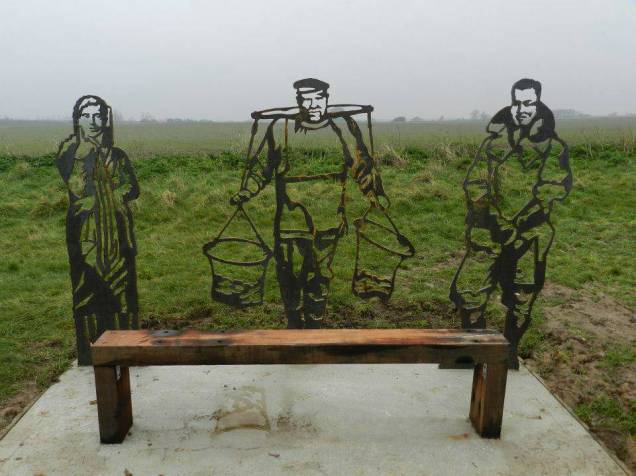 If you fancy a walk along part of the Oyster Bay Trail, on the North Kent coast, why not relax for a moment or too on the new portrait bench just outside Reculver? It’s the brainchild of Canterbury City Council, who allowed the public to choose the three images who would represent the area’s culture and history. The winners were (from left to right) a woman in Roman dress, an oyster fisherman, and Dambuster pilot Warner (“Bill”) Ottley, who flew AJ-C on the Dams Raid and was shot down near Hamm. Bill Ottley’s family lived in Herne Bay, which is the local connection to the portrait bench. Although he was only 20, he had already completed a tour of operations in 207 Squadron, and been recommended for a DFC.
The picture of Ottley on which this bench portrait is based was supplied to the council by Alex Bateman, long time friend of this blog.
If you are quick, you can enter a draw to win £250 simply by taking a photo of someone on the bench and sending it to Canterbury City Council. Closing date 31 March!

2 thoughts on “Take the weight off your feet”