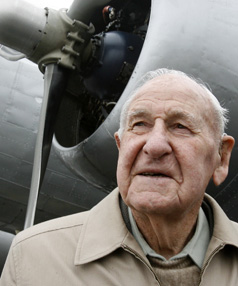 Les Munro, the only Dambuster pilot still alive, shows no sign of slowing down now that he has reached his 90s. According to the Christchurch Press, last week he sat at the controls of a Dakota DC3 shortly after a 30 minute flight over Christchurch with a group of other 2nd World War veterans.
The vintage aircraft obviously brought back memories, as he commended the flight because he ‘could listen to the motors’ and get a sense of flying in a machine.
Les has always been an active sort. He went back to farming after the war, as well as being active in local politics.  It’s good to see that he still has plenty of get up and go. Could the next gig for the nonagenerian be a cameo in the remake of THAT FILM, still ‘in development’ elsewhere in The Land of the Great White Cloud?