From left: Harvey Legace, Lyle Humphrey, Max Smith, Eric Grimwood, Harold Rouse, George Lancey, David Maltby. This 97 Squadron crew flew on 10 operations together between January and May 1942. They are standing alongside Avro Manchester L7474, in which they flew only twice, on training flights on 3 and 8 January 1942. They flew on one operation in another Manchester and the rest in the new Avro Lancasters, which replaced it. [Pic: Rouse family.]

I started researching my uncle David Maltby’s wartime RAF career in 2006, and soon came across the names of the men who made up his crew in 97 Squadron during much of his first tour of operations in 1942. Maltby had started his pilot career in the summer of 1941 flying the Hampden medium bomber, undertaking 12 operations, but in the autumn the Avro Manchester heavy bomber became available, and he flew four operations as a second pilot. By December he was ready to become a first pilot, and he took on six men fresh out of training in order to build a new crew.

The crew is shown in the photograph above, and was made up of Sgt George Lancey (second pilot, RCAF), Sgt Max Smith (navigator, RAAF), Sgt Eric Grimwood (wireless operator), Sgt Harold Rouse (2nd wireless operator/air gunner), Sgt Lyle Humphrey and Sgt Harvey Legace (air gunners, both RCAF). The trades of bomb aimer and flight engineer did not exist at this stage in the war.

In 2006, I made some effort to track down the men who flew with David Maltby with the help of the 97 Squadron historian, Kevin Bending. I was lucky in that George Lancey’s son in Canada sent him an email which he forwarded to me. The Lancey family were then kind enough to send me crew pictures and some other material.

Sadly, at this time I didn’t know that one of the crew, Harold Rouse, was living in happy retirement in Norwich. By coincidence, he was about to tape record a series of reminiscences about his life, including his wartime experiences in Bomber Command. He died at the age of 92 in 2014, and the recordings went untranscribed until earlier this year. Then, with the lockdown giving him some time on his hands, his son-in-law Matthew Williams used it to edit the recordings and publish them as a book, From Leiston to Lancasters.

This extract, describing a crash landing in which everyone was lucky to escape with their lives, is taken from the book:

“My next trip came about on May 4th [1942]. We were going to Stuttgart. And we were going to be crossing over the coast at Aldeburgh. I was in the front turret again. It was dark when we took off if I remember rightly, and it was still dark when we crossed over the coast, but anyway I could see when we did so. I thought, ‘Well Dorothy [his girlfriend, who lived in Aldeburgh], you’re down there somewhere, and I’m up here.’

Half an hour later we hit the enemy coast, and that’s where we got rather badly hit up. We lost our hydraulics – we couldn’t open the bomb doors, and the wheels came down but they weren’t locked.

David said we’re in a bit of a state and we can’t carry on, so we’ll have to go back. We flew along the coast to see whether we could get rid of our bombs, because we had 3,304 incendiary bombs on board. They were in 14 cases in our bomb bay – they were small magnesium bombs really, 236 in a case. So we were carrying quite a big bomb load – I suppose it was over six tons. But we couldn’t get rid of them because we couldn’t open the bomb doors.

We turned round to come back. I think we crossed over somewhere near Norwich to go up to the Wash and then we got back to Woodhall Spa. David called up and they said, ‘Well, you better land at Coningsby,’ which was still a grass aerodrome – Woodhall Spa being concrete. He said, ‘All right,’ and we went round to Coningsby and got permission from there to land.

We touched down onto the grass, we bounced, bounced once again but just couldn’t slow down enough. The runway finished up near a corner and there was a gun emplacement there, and as we tore along, they all jumped out of the gun emplacement. We crossed over one road, a field, another road and then into another field, and finally ended up with our nose against a tree. Fortunately, as no front gunner was allowed in the front turret during landing, I’d already got out from there – just as well, because my front turret was absolutely mangled.

It was about half past two in the morning. There was a farm cottage not far away, and people came running out of there because they had heard us come down. But we all managed to get out of the aircraft. I think George bumped his head. David, who was a broad chap, he told us he escaped through his side window – it seemed hardly wide enough for him to go through, but he went through. I think our gunner Legace also got a bit of a bump – he’d got out of his turret by then of course. But we were all quite safe.

And the aircraft didn’t go up, neither did the bombs fortunately. The fire engine and an ambulance and all the rest of it turned up from the station, took us back to the mess, we had our flying breakfast, our egg again, and went off to bed.

The next morning, the five of us (David, George, Max, Eric and myself) went and viewed our aircraft. As I said previously, David was living out at Woodhall Spa with his fiancée at some relatives or friends of hers, [actually his fiancée’s sister – CF] and he had the use of their car. So he drove to the station and picked us four up, and we went and viewed the wrecked aircraft in daylight. It had been brand-new just the previous day. S for Sugar (we didn’t call it S for Sugar though).

It had broken its back, one wheel was here and another wheel was there, the nose was right up against this tree. Eric took some photographs, and later, after Eric was lost, I found them amongst his belongings, and I thought, ‘I’m going to have these.’”

These are three of the photographs taken by Eric Grimwood:

R5553 OF-S came to rest, against a tree on the edge of RAF Coningsby. [Pic: Rouse family.]

With backs to camera, three of the crew of S-Sugar examining the wreckage after its crash landing. In the middle is David Maltby. The man on the right is unidentified ground crew. [Pic: Rouse family.] 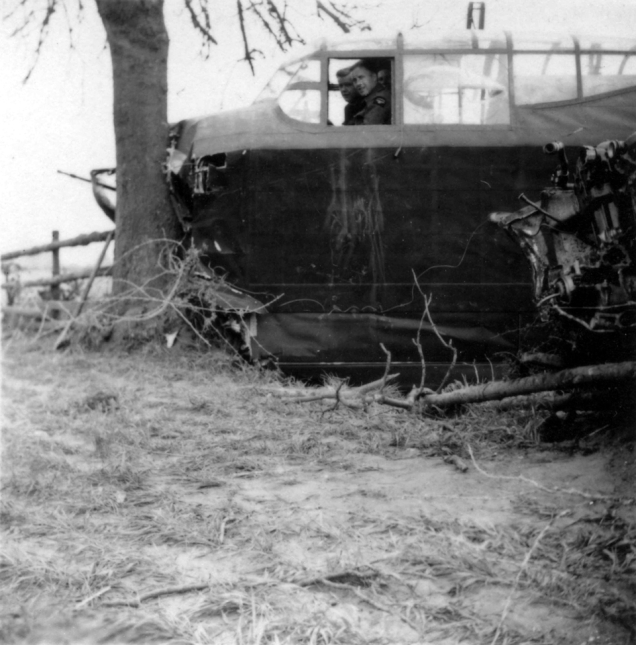 Three of the crew in the cockpit of the crashed aircraft. In the front seats, Max Smith and George Lancey. Unidentified man behind. [Pic: Rouse family.]

Eric Grimwood, mentioned by Rouse as taking the photographs above, left the crew soon after this crash in order to train for remustering in the new trade of bomb aimer. David Maltby also finished his tour of operations in June 1942, and some of the crew went on to fly with other pilots. One of these was Grimwood, who having successfully retrained, went missing in action on an operation to Hamburg on 26 July 1942, in a crew skippered by Flg Off William McMurchy. Rouse was a good friend of Grimwood, which was why he sorted through his possessions before they were returned to his family.

On 27 August, Rouse became the wireless operator in George Lancey’s crew, and they successfully completed their first tour of operations on 8 December 1942. Rouse went on to serve in a variety of training roles until the end of the war. He was finally demobilised in December 1945. In civilian life he became a cost accountant and then a company secretary with various companies in Norfolk, ending up at the large holiday firm of Blake’s.

Between November 1944 and May 1945, George Lancey did part of his second tour in 617 Squadron and flew on about 11 operations. He went back to Canada after the war.

From Leiston to Lancasters – an excellent read – is available from this site.