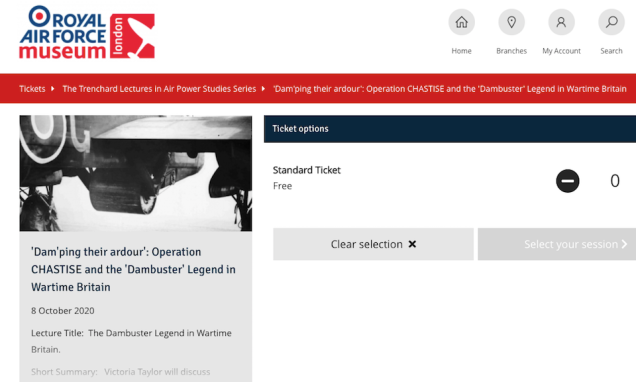 Historian Victoria Taylor is giving one of this year’s prestigious RAF Museum Trenchard lectures on Thursday 8 October at 6.00pm. It is called ‘“Dam’ping Their Ardour”: Operation Chastise and the “Dambusters” legend in wartime Britain’. The lecture will consider why Operation Chastise became a cornerstone of British wartime mythology, and determine how it became so firmly entrenched in the hearts and minds of the British public under the blanket of wartime secrecy.

The story of the raid is well known to readers of this blog but much of the nation’s general impressions of the raid, however, have been coloured by post-war British popular culture, from Guy Gibson and Paul Brickhill’s books to Michael Anderson’s enduring film The Dam Busters (1955).

The considerable impact of these post-war resources upon the Chastise legend can be seen in the remark by pilot Flt Sgt Bill Townsend who claimed in the 1980s that ‘until that film was made, it was just another operation, wasn’t it?’

However, this wasn’t so, and how the raid’s success was promoted during wartime is the subject of the lecture, which will draw on contemporary newspapers, newsreels, cartoons and official correspondence.

The lecture is now being held online, but prebooking is essential. Free tickets are available here from the RAF Museum website.