617 Squadron’s Lancaster ME559 photographed in early 1945 after being repaired and converted for Soviet Air Force use. [Pic: Alternative History.]

Frank Pleszak has uncovered and translated a Russian language article from an Estonian blog which gives more information about the fate of one of the 617 Squadron Lancasters used in the September 1944 attack on the Tirpitz battleship, codenamed Operation Paravane.

At this time, the Tirpitz was moored at a base in Kaafjord in the north of Norway. It was out of range for Lancasters flying from a UK base, so it was decided to use a Soviet airstrip in Yagodnik as a refuelling stop. The initial plan had been to land here after the force had conducted its bombing operation but at the last minute the order was changed so that the attack would be launched from Yagodnik. Two 511 Squadron Liberators, carrying several experienced ground crew, a medical officer and spare parts flew there to await the strike force’s arrival.

Thirty-eight Lancasters set off on the operation – 20 from 617 Squadron and 18 from 9 Squadron. Another Lancaster carried an RAF film unit and two journalists. Despite good weather forecasts, the force encountered thick clouds after entering Finnish airspace and this continued for the remainder of the flight. The conditions made navigation difficult, and forced the pilots to fly at a low altitude. Only 26 of the Lancasters were able to locate Yagodnik and land there; the remainder landed at other airfields or crash landed in open spaces. Amongst those that crash landed was ME559, piloted by Sqn Ldr Drew Wyness. The two photographs below show the damage which it incurred. 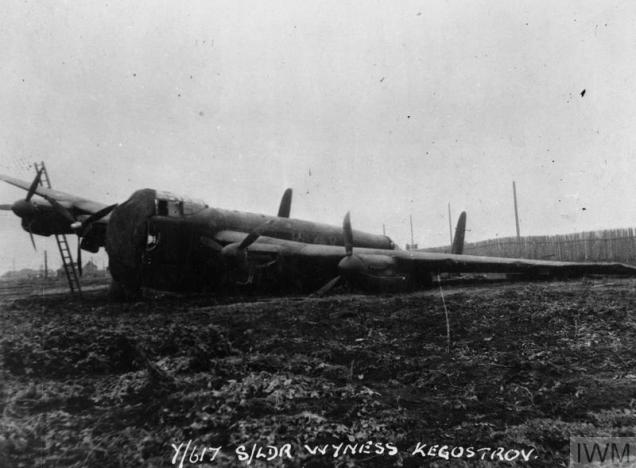 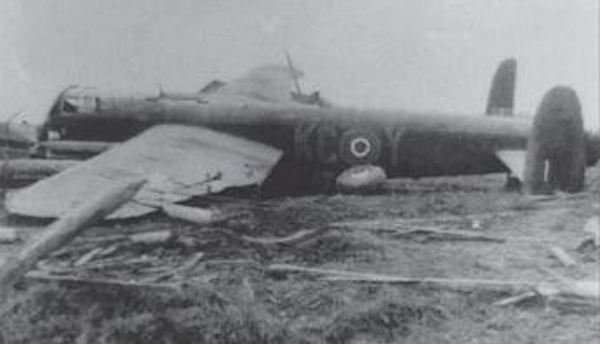 Two pictures of ME559 after it crash landed in Russia. [Top: IWM MH30798. Bottom: Alternative History.]

After two days, enough of the force had been repaired and on 15 September the Tirpitz was attacked with a mixture of Tallboy bombs and ‘Johnny Walker’ mines. A large explosion was observed but it seemed as though the ship was still afloat. No Lancasters were lost over the target and they all returned to Yagodnik. They flew back to their UK bases over the next few days, although Plt Off Levy and his crew crashed in Norway en route, and all on board were killed.

Of the Lancasters left behind, two of the least damaged were delivered to Kegostrov, where the repaired in the workshops of the Air Force of the Belomorsky Flotilla, under the leadership of the chief engineer Kiryanov.

All weapons were removed and the rear turret was sewn up with duralumin sheets. The damaged nose was changed: the bomb aimer’s blister and front turret were replaced with a single Perspex construction. According to the Russian language blog: “The colour remained the same, English (brown-green top and black bottom), only the identification marks were painted over with our green paint (which differed in tone) and red stars in a black border were applied on top. Both aircraft were redone the same way.”

ME559 was given the number 01 and went to the 16th Transport Detachment (TRAO), where it operated from the end of January 1945. The commander of the aircraft was V. Evdokimov and the navigator V. Andreev. The 16th TRAO was the successor to the 2nd air group, I.T. Mazuruk, formed at the beginning of the war from polar pilots. Although this was described as a transport unit, it was used not so much for transporting people and goods, but for escorting convoys, ice reconnaissance, and on patrols. The only known photograph of Lancaster 01 (ME559) is shown at the top of this article and this illustration recreates its colour scheme: 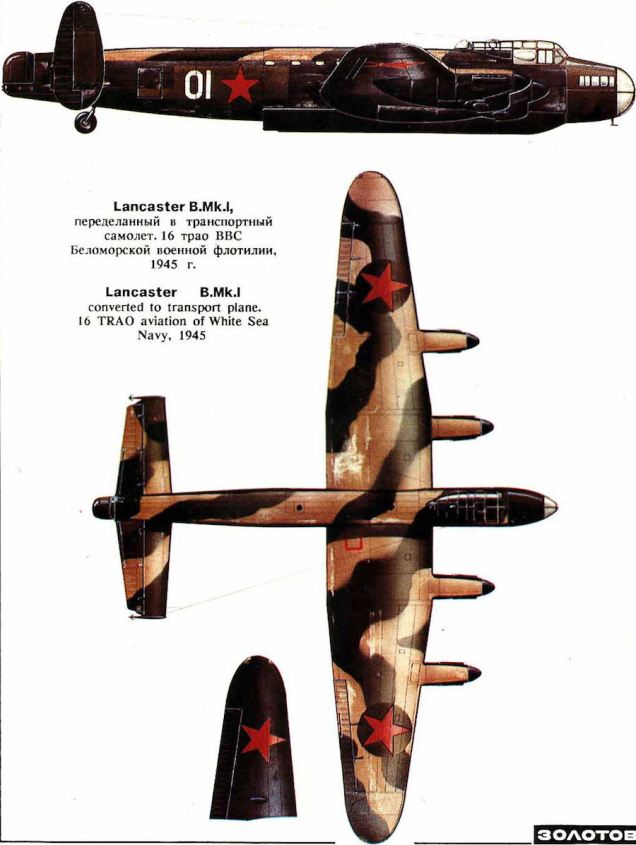 The Russian/Estonian blog tells us what is known about the aircraft’s final days: “In August 1945, this machine was sent to the Pacific Ocean, but in Krasnoyarsk it got stuck due to lack of fuel. While waiting for gas, the war with Japan ended. In the summer of 1946 this “Lancaster” was transferred to Riga, to the aviation technical school, as a visual aid. Its further fate is unknown.”

[Thanks to Frank Pleszak for this story.]