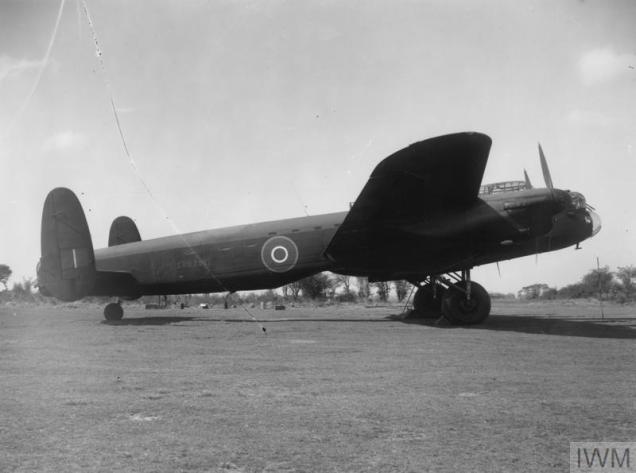 Lancaster ED825/G, one of the 23 Type 464 aircraft built for Operation Chastise. This was given the code AJ-T and was slated to be the spare. Because ED915/G AJ-Q was found to be faulty while preparing for take-off, Joe McCarthy and his crew eventually flew this aircraft on the raid, and attacked the Sorpe Dam. [Pic: IWM ATP 11384C]

Frank Pleszak has done a great service to other Dams Raid researchers by compiling a definitive list of the fate of the 23 aircraft built for Operation Chastise. These were all constructed over a period of two months in 1943 as a variation of the production run of Model BIII Lancasters taking place at the Avro headquarters factory at Chadderton, with final assembly at Woodford, both in Greater Manchester. The special model was given the name of Type 464 (Provisioning).

In total 23 Lancaster Type 464 conversions were produced. Nineteen of these flew on the Dams raid and eight were lost, leaving fifteen. None were ever fully returned to standard Lancaster BIII configuration (although some were part-modified) as it was too difficult or too costly to refit the bomb bay doors and mid-upper turret.

Over several days in August 1943 nine of the aircraft were used for trials with forward-rotating Upkeep mines at the Ashley Walk bombing range in the New Forest. During the trials ED765 was caught in the slipstream of others as it flew in close formation and crashed. The pilot (Flt Lt William Kellaway) and bomb aimer were seriously injured while the rest of the crew had more minor injuries.

Over the following six months some of the aircraft were used on occasional operations, as well as for training and other trials. On 10 December 1943, on an operation to drop supplies to members of the SOE, ED825 and ED886 were both lost. The crews were skippered by Wrt Off G Bull and Flg Off Gordon Weeden. Weeden and all his crew were killed, but Bull and four of his crew managed to bale out and were captured. The final wartime loss of a Dams Raid Lancaster occurred on 20 January 1944 when ED918 crashed on a night training flight near Snettisham in Norfolk. The pilot, Flt Lt Thomas O’Shaughnessy, was killed along with his bomb aimer.

Three were used after the war, in August and December 1946, in an mission which was given the name Operation Guzzle: the disposal of the remaining 37 live Upkeep mines in the Atlantic Ocean about 280 miles west of Glasgow. The eleven Type 464 Lancasters which survived the war were all finally scrapped in 1946-7.

You can read Frank’s full post on his blog here.

9 thoughts on “What happened to the Dams Raid Lancasters: a definitive list”