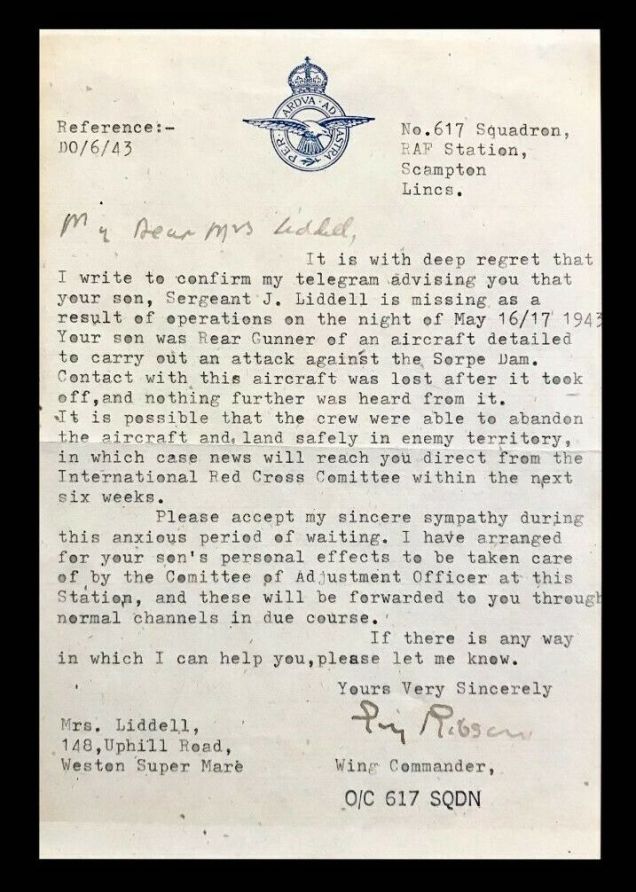 A really poor item, purporting to be a letter from Guy Gibson to the family of Jack Liddell, has recently gone on sale on eBay at the preposterous price of £14,995. 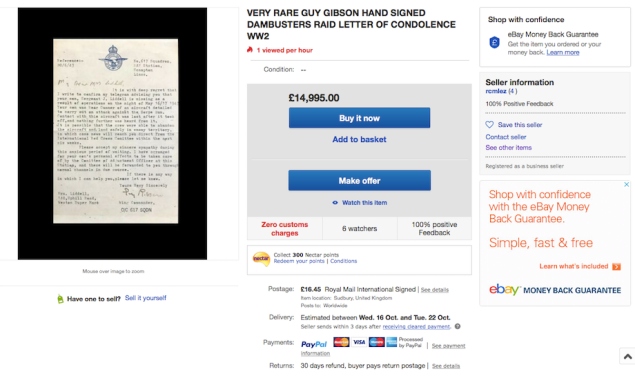 It is being offered for sale by a dealer from Sudbury called rcmlez, who seems to have been a dealer only since July 2019, specialising mainly in football-related items.

Even though my observations are based solely on examining the photograph of the item, I have no hesitation in saying that it is a fake. There are a number of reasons behind my decision. 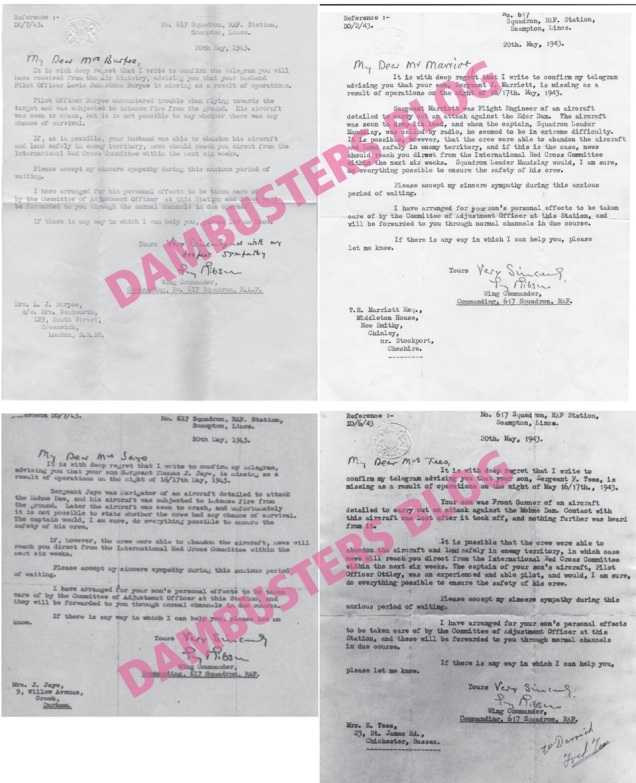 1. Stationery
There are a number of examples of the 56 letters sent from Guy Gibson to members of 617 Squadron who went missing on the Dams Raid still in existence. Four are shown above. In all cases, the letters were typed on a sheet of plain paper, approx 9 × 7 inches, with a royal crest blind-stamped at the top. The fake letter would seem to be on a smaller sheet, probably the traditional writing pad size of approx 5 1⁄2 × 7 inches, with an RAF crest printed in blue at the top. This stationery was widely available at RAF stations, particularly in officers’s messes, and was commonly used for personal letters.

2. Layout
The genuine letters were typed by several different typists on a number of machines. However, they all follow a standard layout: each paragraph is indented by the same number of tabs  and there is a line space between them. (The number of tabs seems to vary, which indicates that several different typists were responsible.) In the fake letter, the paragraphs are not separated and the indents differ throughout. This may well be because the paper is a smaller size and therefore the faker had to save space in order to get the text onto one page. This is further exemplified by the very small margins, with the typing extending to the very edge of the paper.

3. Text
In all the genuine letters to non-pilot aircrew there is a reference to the skills and ability of the pilot, with Gibson assuring the recipient that the pilot would have done everything possible to ensure the safety of his crew (the wording varies). This is missing in the fake letter, presumably because of the space issue mentioned above.

4. Closing salutation and signature
In the genuine letters, these all follow the same format. The word “Yours” is typed. Gibson has handwritten “Very Sincerely” and followed this with a signature. In some examples he has added a further message. Underneath the typing reads

The fake has the typed words “Very Sincerely”. There follows a poorly-executed fake signature, the typed words “Wing Commander,” and the impression from a rubber stamp “O/C 617 Sqdn.” This rubber stamp has never been seen on any genuine wartime correspondence from any commanding officer of 617 Squadron.

5. Name and address of recipient
This is the clincher!  The fake letter has the wrong name and address for the recipient. Jack Liddell’s father had died in the 1920s, leaving his mother with two small children. By the time Jack joined the RAF she had remarried and used a different surname, and she was known by this surname in 1943 at the time of Jack’s death. Moreover, she and the rest of her family were living at a different address in Weston-super-Mare at this time. (The correct surname and address are known to me, but I have decided not to release them publicly. Similarly, I have chosen not to show large resolution versions of the genuine letters, in the hope that this will make it slightly harder for anyone wanting to produce a better-faked version in the future. It is sad that I have to do this, but such is the nature of the world.)

If this letter was genuine, it would be very valuable but I doubt that it would be worth as much as £14,950. In my view, the item now on sale is completely worthless and I would advise anyone thinking of buying it to back off.

[Thanks to Stephen Murray for the tip]

10 thoughts on ““Gibson letter” to Liddell family is fake”