My attention was recently drawn to an item which came up for sale recently on eBay, shown above. This purports to be a wartime form recording the damage suffered by the Lancaster ED936 AJ-H flown by Plt Off Geoff Rice on the Dams Raid. As most regular readers of this blog will know, this aircraft made an early return to base after flying too low over the sea near the Dutch coast and colliding with the water. The impact was severe enough to damage the aircraft quite badly and tear off the bomb it was carrying.

This is the description which appeared on the eBay website. The item was offered for sale by a dealer called 230ocu, who lives in Kent and has been an eBay dealer since 2003. After five bids it was sold for £425.53.

The only other information on the eBay listing was a series of seven photographs of the item. I must emphasise that the commentary which follows is based on an examination of these photographs, and not of the item itself. Here are the two photographs which show the whole item, front and back.

The eBay item is said to be a form entitled “Report on Flying Accident or Forced Landing attributable to Enemy Action”, with the reference number 765(C). However this immediately flags up a problem since there is no evidence that any such form with this exact title and number existed in the second world war period.

As is well known, several of the aircraft used on the Dams Raid suffered damage before returning to base. However, there are no examples of a similar form being used for any of the other aircraft on this operation.

I posted a query about this form on the RAF Commands Forum and none of the experts who read the post could recall seeing a form of this name. There are samples of many of the RAF’s WW2 forms on this site, and those in the 765 series are as follows:

It will be noted from the above that there is a genuine Form 765(C), which is the same number as displayed on the eBay item. However, there is absolutely no evidence that there was ever a variation of the genuine form, let alone one with the same reference number. Indeed, if there was such a thing, one would expect it to have been given a new number.

This is an example of the genuine Form 765(C), taken from RAF Commands:

The two important differences are: (1) In removing the word “NOT” from the second line of the heading the line has not been re-centred on the page. (2) All the lines of dots (known in the printing trade as ‘dot leaders’) which appeared in the original form to show the typist or writer which sections have to be filled in have been removed.

I can demonstrate the similarities between the two forms by using my own computer software to make up a replica of the eBay form using the four separate pages of the genuine form. I used Photoshop to erase the typing and dot leaders and InDesign to assemble the relevant sections into a single page. I’ve deliberately left the differences in colour in the erasures and background so that you can see how the different sections are slotted together. 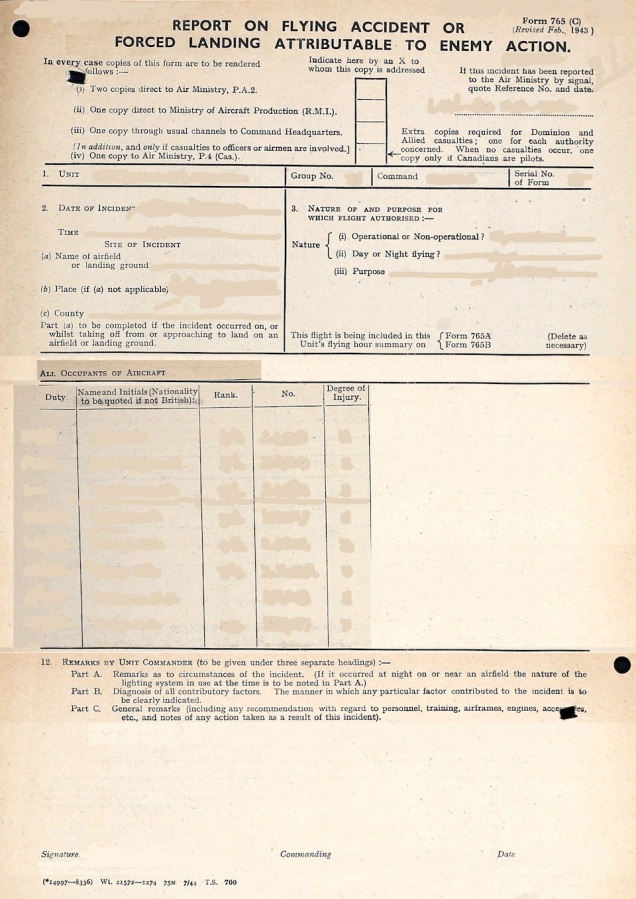 It is noticeable that I was able to re-create the eBay form entirely from the genuine form, with no new typesetting required. I believe that this cannot be a coincidence, and therefore that the eBay form was created in a similar manner.

The fact that the dot leaders are missing in the eBay version suggests that the person who assembled its artwork had to delete them because they were typed over.

Now let us now look at the eBay form in more detail. The next illustration contains my comments both on the typographic anomalies of the form itself (which I have dealt with above) and the text which has been typed onto it, which I will discuss below.

In the section entitled “All Occupants of Aircraft”, which should be numbered as section 4 but is not numbered at all, the names and initials are correctly listed. However, the heading says “Nationality to be quoted if not British”, and there is no mention of the fact that two of the crew (Gowrie and Thrasher) were Canadian.

The fourth section, where service numbers should be listed, has been left blank. I cannot recall ever seeing a service document where a request for service numbers has not been completed.

Turning to the section where the damage is recorded, there are a number of things to note. First, this section has no heading, something which is very unusual for an official form. One would expect it to say something like “Summary of Damage”. The text itself begins with a description of the operation (information that would be recorded on other official documents, rather than here) but there is no mention of the actual damage incurred by the aircraft both at the time of impact with the water and subsequently when landing without a tailwheel. It is known that there was substantial damage to the bomb bay and fairings, but this is not mentioned, let alone recorded in detail.

There is also no reference to the official Category of Damage. This was the normal phrase used in assessing an aircraft which had been in an accident, and would have been self-evident from even a cursory inspection of the aircraft on 17 May. Since the aircraft was on an operational flight and the incident occurred over enemy occupied territory it can be certain that the damage would have been ascribed as F (B) (i.e. a Flying Incident/Battle Damage).

The errors and misspellings in the typing of the text are noted by the vendor, who says that this was common in documents from this era. However, there are many more in this item than one would expect in a document which is likely to have been typed by someone with proficiency as a typist.

As I said at the outset of this article, I have only been able to examine the photographs which appeared on the eBay auction site. If it were possible to look at the actual document, I would expect to see evidence that it was printed by letterpress on paper of a type that was manufactured in the 1940s. I suspect that there would be no such evidence. My research suggests that it has been printed by offset litho, or even by a digital method, by creating artwork from a genuine Form 765(C) constructed in a similar method to the one I have demonstrated above.

In conclusion, I will say that I am quite satisfied that the form which was sold on eBay on 27 September 2019 is not a genuine wartime artifact.

Thanks to Mark Peoples, Dennis Burke, Nigel Favill, Susan Paxton and Dr Robert Owen for help with this article.