Dams Raid pilot Lewis Johnstone Burpee was born in Ottawa on 5 March 1918. He graduated from Lisgar Collegiate Institute in 1937 and went on to Queen’s University in Kingston, Ontario. He enrolled in the Royal Canadian Air Force in 1940 and after completing pilot training was posted to 106 Squadron, then under the command of Wg Cdr Guy Gibson. He completed some 30 operations in the squadron, was awarded the DFM and received a commission. In March 1943 Gibson set up the new 617 Squadron to undertake the Dams Raid and Burpee and his crew came over to RAF Scampton to join him. He was the only one of the three pilots who had served under Gibson in 106 Squadron to bring his full crew with him.

Burpee and his crew never returned from the mission on the night of 16-17 May 1943. They were shot down over Holland en route to the dams, and all crew members aboard their Lancaster bomber perished.

For several years, Robert Tang, a maths teacher at Lisgar with a strong interest in history, has been using the mathematics underpinning the innovative “bouncing bomb” that was developed by engineer Barnes Wallis to destroy the dams, saying that applying mathematics—especially trigonometry and algebra—to a real situation brings the subject to life for his students. The students even take a field trip to the nearby Canada Aviation and Space Museum, where they carry out experiments, fly a simulator and see a Lancaster bomber.

However, it wasn’t until earlier this year that Mr Tang discovered that Lewis Burpee had been a pupil at his school. He then found that Burpee’s son, also called Lewis Burpee, still lived in the city and made contact with him.

In another moment of serendipity Drew Fraser-Leach, this year’s co-president of the Lisgar Student Council, was in Mr Tang’s class last year. He knew his grandfather had been a Lisgar student at the time, so he went home and found his grandfather’s 1937 yearbook. “He flipped through it and found Plt Off Burpee’s signature,” explained Mr Tang. “That was a sign that we really had to make this our focus for the Remembrance Day ceremony.” 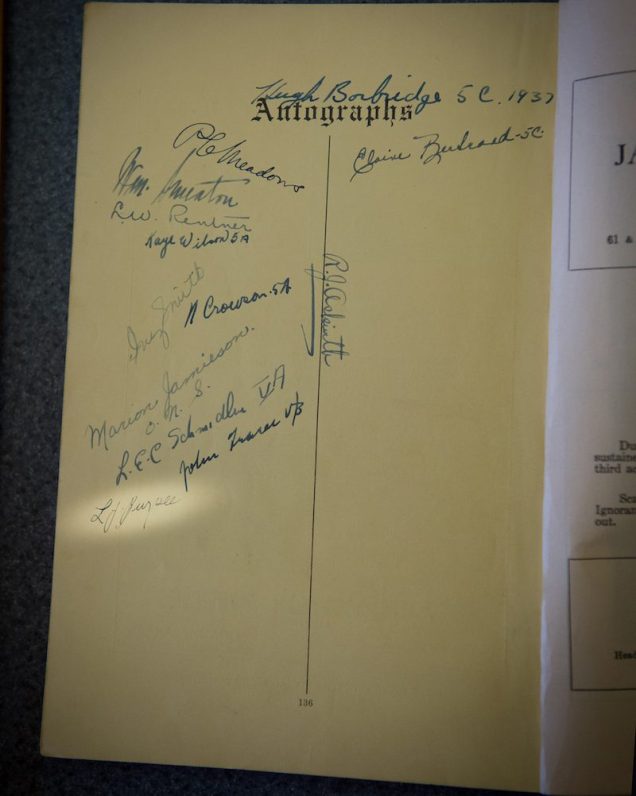 The guests at the Lisgar Collegiate Institute also included Lieutenant-General Al Meinzinger, commander-in-chief of the Royal Canadian Air Force. “We are grateful for the sacrifices of people like Lewis Burpee, and we share the sorrow of their families and loved ones,” Lt Gen Meinzinger said in his speech during the ceremony. “I am also grateful that you, the students and staff of Lisgar Collegiate Institute, for showing our fallen—and in particular Plt Off Burpee—the same respect.”

“Plt Off Burpee, who fought and sacrificed his life for all of us, is just one example of the many brave soldiers who have fought for our peace and freedom,” said Emily He, a student and editor of Lisgar’s yearbook. “We must remember that it was their sacrifices that have led our country to where it is today, and most of all, we must remember that the freedom that all of us enjoy came at an extremely high cost.” 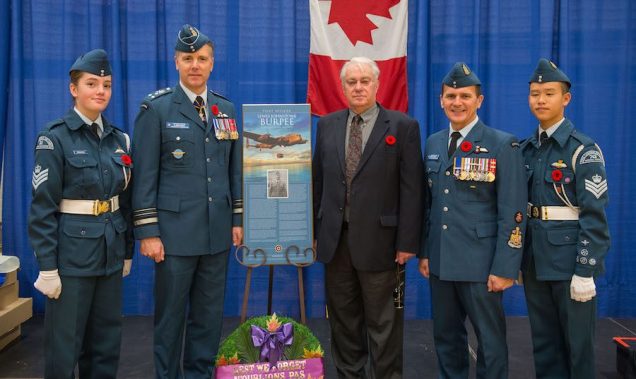 “I would like to thank everyone who was involved in this today – not only Mr Tang but the whole Lisgar team,” said Mr Burpee. “I never knew my Dad; I was born after he died. For decades he was kind of a shadowy figure in my past.” This year’s series of commemorations to mark the raid’s 75th anniversary had allowed him to reconnect better, he added.

“It’s worth pointing out that for all the names on the plaques [in Lisgar’s Memorial Hall], for every airman, every soldier who didn’t come back, they are equally worthy of remembrance.”