Guest post: all text and photographs by Edwina Towson

Last Sunday the “Dambusters Reunited” exhibition of portraits painted by Dan Llewelyn Hall was formally opened.  It is made up of images of the 133 aircrew of 617 squadron who flew on the Dams Raid on the night of 16/17 May 1943. The exhibition is now on view at the RAF Club at 128 Piccadilly, London W1J 7PY and runs until 31 May.

The compact portraits populated the room in the way that they had only ever done in life together on three occasions, the last being the pre-raid briefing when, finally, their target was revealed. Dan Llywelyn Hall had worked to restore these men to their group status but as individuals, spending time looking at a photograph of each and absorbing any biographical details, anecdotes and family reminiscences that could be gleaned at 75 years distance to determine the character in the features of each face.

The 75 years distance was briefly closed for us in the gallery when a special guest, George “Johnny” Johnson, came back into the presence of the gathered portraits, bringing with him so many memories of his own of the dams raid and of the planning and training for it.

He took his seat at the end of the exhibition space, next to a larger portrait of his current self which Dan Llywelyn Hall had painted, in addition to the smaller one of young Sergeant Johnson, bomb-aimer of the crew of Lancaster AJ-T, taking its place in the sets on the long side walls, which were arranged in sevens, seven being a Lancaster’s crewsworth. 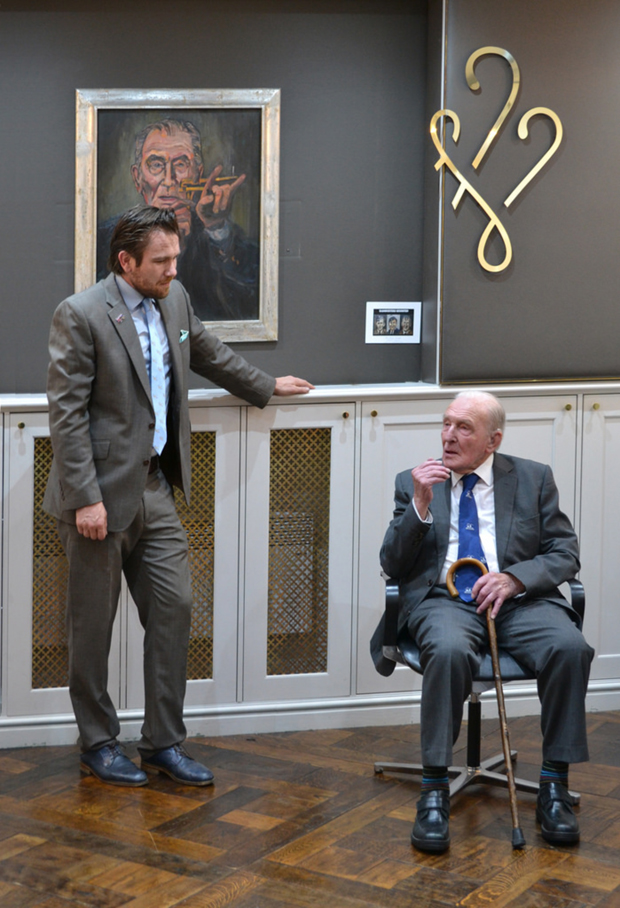 With some prompting questions from the artist, the 96 year old airman talked a bit about the raid in 1943 and described how the specialist bomb sight (which he holds in the large portrait) was something that had needed re-making to be useful. He also talked about the excitement of flying on 17 May this year in the RAF’s Battle of Britain Memorial Flight Lancaster over the Derwent Dam. He remarked that, this time, he had been given a chair to use in the bomb-aimer’s station, which was a lot more comfortable than lying flat in the blister, as he had needed to when directing the pilot into position over the target.

Later, the artist invited the poet Oliver James Lomax to read some of his poems, starting with one called “Dambuster” which appears in the commemorative book recording the exhibition.

Representatives of associated charities had been invited to speak on their particular interest and, generously, Johnny Johnson encouraged us all to give for the charitable causes by signing copies of the large portrait and of the books connected with the exhibition.

Rewarded by Dan Llywelyn Hall with a bottle of Welsh whisky from the Penderyn distillery and holding a glass of red wine for immediate consumption, Johnny Johnson took to his feet and stood in front of the main portrait as the people gathered in the gallery applauded his spirit and his evident determination to keep the 617 narrative in the public eye. 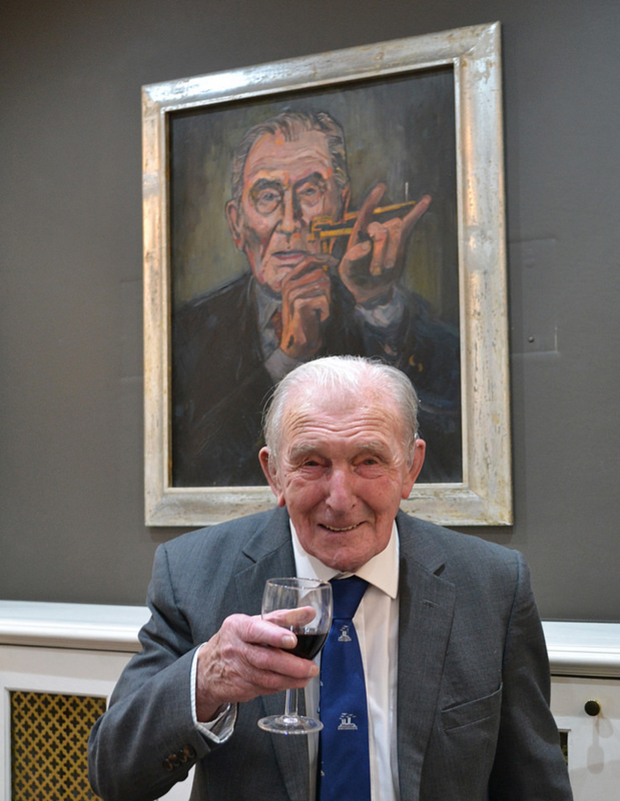 Afterwards, he slowly walked round the portraits, looking hard into the other 132 faces and seeing there things which the rest of us, spared the searing of that Dambuster night, can only guess at.