In April 1943, Canadian airman Flt Sgt John Fraser was allowed special leave for one day from training for the Dams Raid in order to get married. His wife Doris came from Doncaster, and they had met while John was stationed at nearby RAF Finningley.

More than sixty years later, in July 2003, to honour of John and Doris Fraser, Doncaster Council decided to instal a bronze plaque in a local park, next to a tree which was planted in his memory by a group of people including Doris Fraser, her daughter Shere and two of the Fraser grandchildren. Representatives of the current 617 Squadron were also present to honour one of the squadron’s founder members.

Yesterday, Shere Fraser revisited the park and found, to her horror, that the plaque had been wrenched from the memorial stone and removed, presumably for a few pounds worth of scrap metal. Local police and local press have been informed, and if anyone has any further information they are asked to contact the authorities.

Below: the plaque photographed at the time of its installation. 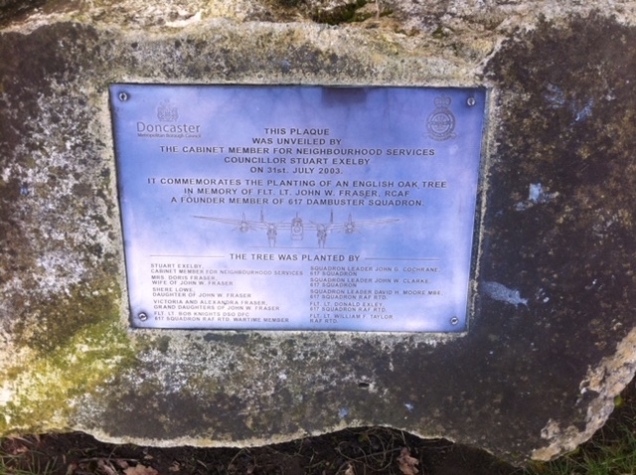