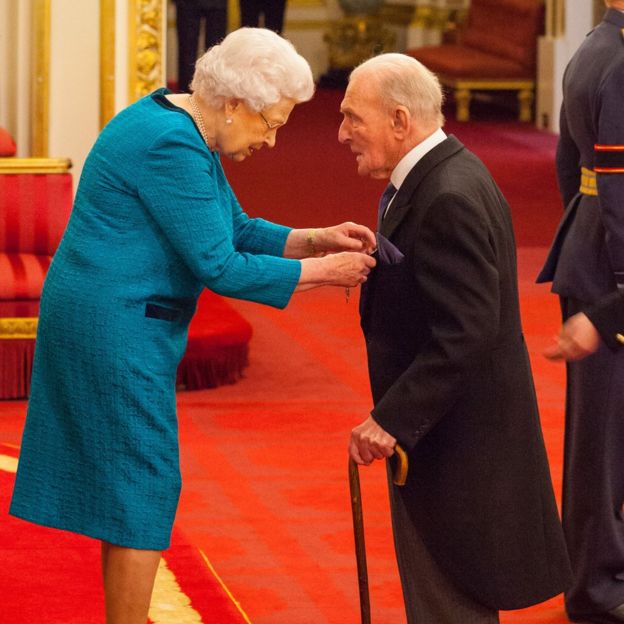 One of the last two men alive who took part in the Dams Raid, George ‘Johnny’ Johnson, was decorated yesterday with the MBE by the Queen at a Buckingham Palace investiture. Johnson, who will be 96 in 17 days time, was the bomb aimer in Joe McCarthy’s crew in Lancaster AJ-T, which attacked the Sorpe Dam on the night of 16/17 May 1943. The other survivor is the 94-year-old Canadian Fred Sutherland, the front gunner in Les Knight’s crew in AJ-N, which dropped the final mine on the Eder Dam, causing its breach.

Johnny Johnson was decorated for his services to Second World War remembrance and to the community in Bristol, where he lives. He said afterwards that the Queen told him that she was ‘glad to see that the Dambusters are still here’.

Johnny Johnson has, of course, been to the palace for an investiture once before, on 22 June 1943, when he was one of the 33 men decorated by the current Queen’s mother after the Dams Raid. On that occasion he received the DFM. He must be one of the few who have an MBE to add to his collection.

16 thoughts on “Johnny Johnson collects MBE from the Queen”