Fay Gillon debriefing an unknown bomber crew. Another copy of this print has the date 1944 on its reverse, and this ties in with the map on the table which is of Northern France. It may be of a 44 Squadron crew, and taken at RAF Dunholme Lodge.  [Pic: Gillon collection; thanks to Robert Owen for further information.]

In March 1943 Fay Gillon, seen in the picture above at work debriefing an unknown bomber crew, was a WAAF officer based at Scampton when 617 Squadron moved in to start training for the Dams Raid. Within a few days, Guy Gibson asked to meet her:

‘Sit down,’ said Gibson as she entered his spartan office. ‘The first thing is: can you keep a secret?’ Gibson’s misgivings about the general inferiority of the opposite sex were made even plainer when he added: ‘I don’t often ask women this.’
The Intelligence Officer assured Gibson that she was well able to keep secrets. Gibson probed further, checking his understanding that Gillon was married and that her husband was overseas. Gillon surmised that the reason for these questions was that as a married woman she would be unlikely to have boy-friends with whom she might talk about squadron matters.
Richard Morris, Guy Gibson, Penguin 1995, p146.

Gibson went on to give her the important task of liaising with 5 Group headquarters over the routes for the training programme, and installed her in an office next to the squadron Navigation Officer, Jack Leggo. Gillon became good friends with Leggo, his skipper Mick Martin, and the rest of his crew, and she flew with them on the final dress rehearsal on the Friday before the raid. Her full account of this trip was published in Morris’s book, as mentioned above, pp160-2. The next day, Saturday 15 May 1943, she was again looking over Martin’s aircraft after its Upkeep mine had been loaded. She may have inadvertently pressed a cockpit lever which dropped it from the aircraft onto the hard standing below. Everyone scattered as quickly as possible, but fortunately the mine didn’t explode.
Fay Gillon died on 5 November 2009 and her wartime photograph album now belongs to her granddaughter, Carissa Howard. Last year, she allowed Australian writer Ian Andrew to publish some of the pictures it contains on his blog. The images provide a further insight into life at Scampton in the spring and summer of 1943.
One of the most interesting informal shots shows a group of officers and some civilians, probably taken outside the officers mess.

Left to right, this shows: in civilian clothes, the two Vickers test pilots most associated with Operation Chastise, Mutt Summers and Robert Handasyde, an RAF officer with face obscured, Guy Gibson (in sunglasses), Les Munro, Richard Trevor-Roper, Les Knight, unknown RAF officer (holding glass and turned towards camera), David Maltby, Fred Spafford and another unknown RAF officer with face obscured. (Thanks to Robert Owen for identifying Summers and Handasyde.)
Gillon was one of the WAAF officers who accompanied the 617 Squadron contingent by train to London for the investiture at Buckingham Palace. Although she is not named in adjutant Harry Humphries’s account of the riotous railway journey, she is likely to have been a witness to the incident when a drunk and trouserless Brian Goodale was pushed into the compartment in which she was travelling. Humphries had to remove Goodale hurriedly as there were “ladies present” whose modesty had to be protected at all costs. She attended the investiture and the album includes some photographs taken there, including one of the Australians who were in attendance. 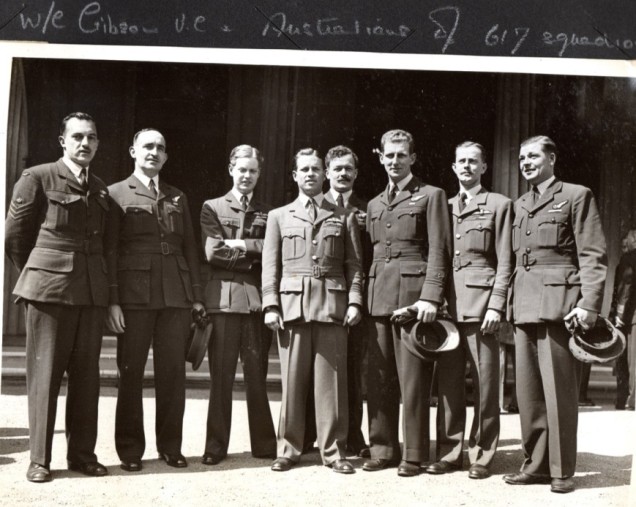 By September 1943, 617 Squadron had moved out of Scampton to Coningsby. However, by then her WAAF colleague Ann Fowler had become engaged to David Shannon and Gillon attended their wedding.

After the war, Fay Gillon and her husband Peter moved to France and started their family of four children. They later lived in London and then moved to Perth, Australia, in 1980. She returned to the UK on a number of occasions, and was very helpful to a number of people researching the history of 617 Squadron, including myself.
Thanks to Carissa Howard for help with this article.