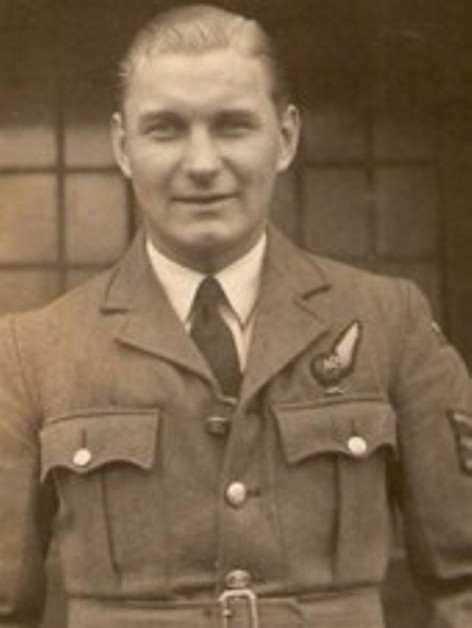 Third wave. Did not reach Sorpe Dam because of navigation problems, flak damage and weather conditions. Returned with mine intact.

Eric Ewan was born in Wolverhampton in 1922, the youngest of the four children of Thomas and Jane Ewan.
He joined the RAF shortly after his eighteenth birthday and was eventually selected for air gunnery training. In January 1943 he was posted to 1654 Conversion Unit, where the whole crew which would eventually fly on the Dams Raid with Cyril Anderson came together.
The crew were posted to 49 Squadron in February 1943, and did their first operation together as a crew on 12 March. After their second trip, they were posted to 617 Squadron but in fact stayed on 49 Squadron to do three more operations, including two to Berlin.
After their trip on the Dams Raid, the Anderson crew returned to 49 Squadron and resumed their operational career with an attack on Krefeld on 21 June.
Altogether, they flew on 14 more operations in 49 Squadron, but on 23 September they failed to return from a successful attack on Mannheim. As they headed home, their aircraft was shot down by a night fighter near Offenbach.
The bodies of five of the crew were recovered from the wreckage and were buried by the local Catholic priest Fr Jacob Storck on 26 September.
The bodies of Gilbert Green and one other unidentified member of the crew were not found until after the others, and the pair were buried in Offenbach Cemetery on 28 September, two days after the other five.
After the war all seven were exhumed and identified, and then reburied in Rheinberg War Cemetery.

Thanks to Dom Howard for help with this article.

More about Ewan online:
All the Anderson crew are commemorated on Dominic Howard’s excellent website. Each of the crew has their own page with biographical details, there is a complete list of the operations undertaken by the whole crew and a full account of their final flight on 23 September 1943.
Entry at Commonwealth War Graves Commission