Don MacLean in an official photograph, probably taken soon after the Dams Raid, as he is still wearing his Flight Sergeant’s stripes and crown. [Pic: RCAF]

Second wave. First aircraft to attack Sorpe Dam. Mine dropped successfully but failed to breach dam. Returned to base.

Donald Arthur MacLean was born in Toronto, Canada, on 2 April 1916, one of the four children of James and Edith MacLean. His father worked as a foreman at Goodyear Tires in the city. He went to Bloor Collegiate school and the University of Toronto, and then qualified as a teacher. He was a good ice hockey player, and this helped him get teaching positions in the small towns of Head Lake and Powassan in Ontario.

MacLean volunteered for the RCAF shortly after the war started. After qualifying as a navigator, he set out for England. After further training and a short spell in 44 Squadron, he arrived at 97 Squadron at the end of 1942. His first operation was with Flt Lt K G Tew, when they took part in “gardening” on 31 December 1942. MacLean then flew on a further 17 operations over the next three months, all except one with Tew as his pilot.  He then transferred to Joe McCarthy’s crew. He may have seen this as a temporary move, since McCarthy and the others were all at the end of their first tour, but when the chance came for a move to a new squadron he went along with it. The easy rapport between McCarthy and his crew would surely have swayed his decision, along with the fact that it already held two other Canadians. Whatever the reason, with MacLean’s arrival, McCarthy’s crew was complete and wouldn’t change again for another 13 months.

MacLean’s navigation log for the Dams Raid provides an account of AJ-T’s journey, along with some fascinating details. At 0020, before the aircraft reached the target, MacLean wrote: “W.Op fixing TR9 under my table”. He recorded the time of arrival at Target Z as 0030 and at 0046 wrote “Bombs Gone”. If there were nine or ten runs in all, as Johnny Johnson recalls, then this would mean that they took not much more than 90 seconds each time to get back to the starting point. 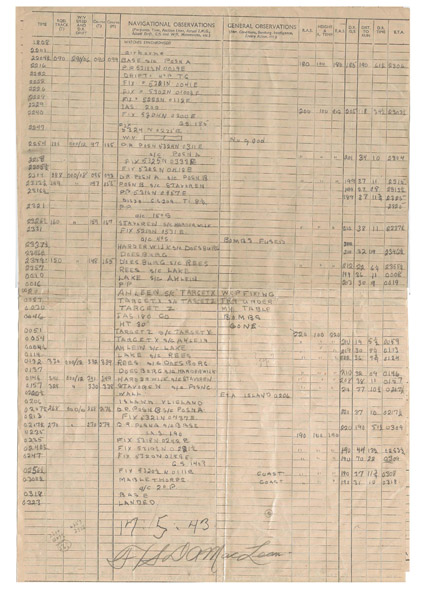 MacLean’s log doesn’t seem to record the fact that AJ-T went off course on the way home, ending up over the heavily defended town of Hamm. Fortunately McCarthy managed to find a way through and the aircraft returned unscathed. The error might have been due to the earlier change in compass deviation cards.

MacLean and Johnson were both awarded DFMs for their work on the Dams Raid. It emerged a few days later that MacLean had in fact been commissioned shortly before the raid, but didn’t receive notification until afterwards. This meant that logically, he should have received the officers’ medal, the DFC, instead. Adjutant Harry Humphries offered to try and get the draft award changed, but MacLean declined, saying: “Hell, no!”

MacLean carried on flying with Joe McCarthy throughout the rest of their tour, ending with 57 operations under his belt. He married his wife Josie, who had worked as a wireless operator at Scampton, in Lincoln Cathedral in 1944. She went out to Canada and lived with her parents-in-law until MacLean himself was able to return there later that year.

Don MacLean stayed in the RCAF after the war, and eventually retired in 1967 as a Wing Commander. He was stationed in many locations across Canada and the USA but also had a four year stint from 1957 to 1961 on the Canadian Joint Staff in London. The family, which by then included four children, lived in Croydon at that time.

After leaving the RCAF, he worked as Director of the Ontario Health Insurance Program (OHIP) in Toronto.  He finally retired in 1981 and died in Toronto on 16 July 1992.

Further information about Don MacLean and the other 132 men who flew on the Dams Raid can be found in my book The Complete Dambusters, published by History Press in 2018.

One thought on “Dambuster of the Day No. 94: Donald MacLean”