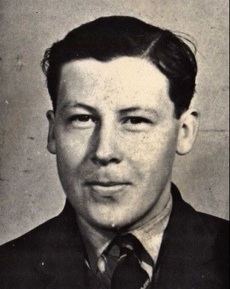 Second wave. Shot down on outward flight and crashed into sea.

Alastair James Taylor was born in Alves, Morayshire on 19 December 1922. He was the eldest of the five children of Stephen and Sarah Taylor. His brother Charles also served as a flight engineer in the RAF, and his sister Phyllis was in the WAAF. His home village of Kirkhill was just a few miles from two locations – Kinloss and Lossiemouth – which would become very familiar to the personnel of Bomber Command in the war years. He went to Elgin Academy.

He joined the RAF as an apprentice at RAF Halton in January 1939, and served in ground crew until selected for flight engineer training at No 4 School of Technical Training at RAF St Athan in the summer of 1942. After qualification, he was posted to 1654 Conversion Unit in December 1942, where he crewed up with Vernon Byers and his colleagues. The crew arrived at Bottesford to join 467 Squadron on 3 February 1943, and had flown on just three operations by the time they were posted to 617 Squadron at the end of March.

The rigours of life in the new squadron didn’t prevent Taylor persuading his pilot to fly low over his family home when they flew to Morayshire on a training run in early May. He wrote to his mother shortly after: ‘I hope we didn’t scare you too much last Monday. I saw you and Aunt Julia just in front of the house but I could not pick dad out anywhere, so thought he would probably be at a pig sale.’

‘Beating up’ family houses was quite common in wartime. If they had a close relative in the RAF the occupants would listen out for aircraft. They would then rush outside if one flew over very low. It was usually a sign from the relative that everything was OK.

The wave from the cockpit was probably the last time that Taylor and his mother saw each other. A few days later AJ-K set off on its fateful flight on the Dams Raid, and was shot down even before it reached the Dutch coast. Like five of his colleagues, Alastair Taylor has no known grave, and is commemorated instead on the Runnymede Memorial.

Further information about Alastair Taylor and the other 132 men who flew on the Dams Raid can be found in my book The Complete Dambusters, published by History Press in 2018.

6 thoughts on “Dambuster of the Day No. 79: Alastair Taylor”