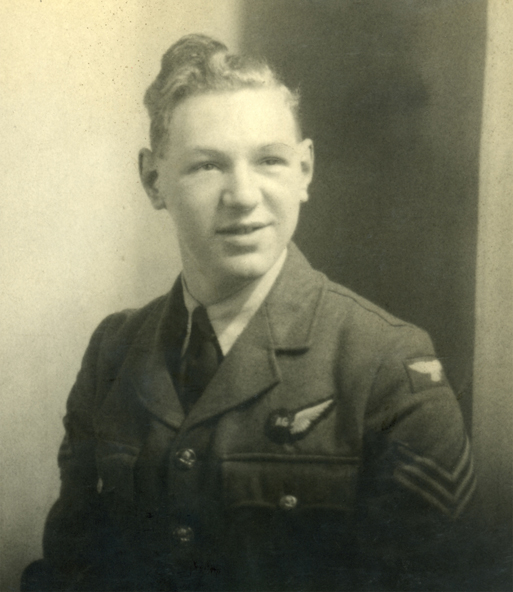 Second wave. Aircraft badly damaged by flak on outward flight. Returned to base with mine intact.

William (Bill) Howarth was born in Oldham, Lancashire on 29 August 1921. His father was also named William Howarth, and he was a warehouse foreman in the cotton industry. His mother was Lily Howarth (nee Martin), and she worked as a cotton operative. Howarth went to Higginshaw School, Oldham, and on leaving school worked as a grocer’s manager.

He joined the RAF in 1941, and was eventually selected for Air Gunner training, which he completed in August 1942. He crewed up with Les Munro, Jock Rumbles and Percy Pigeon at the end of September 1942, during heavy bomber training. Frank Appleby also joined the crew at the same time. These five would serve together uninterrupted for another 20 months.

Like his colleagues, he had completed some 20 operations with Munro by the time they volunteered for transfer to the new 617 Squadron. On the Dams Raid, he was positioned in the front gun turret and afterwards agreed with his captain that the damage to AJ-W was caused by land-based ‘light flak guns’.

Howarth went on to complete more than 50 operations with Munro by the time the crew were taken off operational duties in July 1944. He was recommended for the DFM in April 1944. The citation read:

Flight Sergeant Howarth has completed 41 operational sorties as Air Gunner and many of these have been against the most heavily defended targets in Germany and Italy. He has operated continuously since January 1943, and his last 20 sorties have been carried out against objectives in occupied Europe whilst operating with a special duties squadron. During these operations, his exceptional coolness and marked ability as an Air Gunner has materially assisted his Captain in pressing home the attacks against opposition. Flight Sergeant Howarth’s marked enthusiasm for operations and his outstanding devotion to duty merit the highest praise. He is therefore strongly recommended for the award of the Distinguished Flying Medal. (10 April 1944).

Howarth was commissioned in June 1944. He spent the remainder of the war in various training roles, rising to the rank of Flight Lieutenant, and acting as Gunnery Leader in several different establishments. He left the RAF in June 1946 and returned to his former job in the grocery trade for a short time, before joining the Prudential Assurance Company in 1947 where he worked until retirement.

He married Doris Hall, a munitions worker, on 3 July 1943, and they had three sons, one of whom died in infancy. During both his working life and his retirement he was actively involved in fundraising for the Leonard Cheshire Homes.

Bill Howarth died on 12 January 1990, and was cremated at Hollinwood crematorium, Oldham.

[Thanks to David Howarth and Kevin Bending for help with this article.]

Further information about William Howarth and the other 132 men who flew on the Dams Raid can be found in my book The Complete Dambusters, published by History Press in 2018.

13 thoughts on “Dambuster of the Day No. 76: William Howarth”