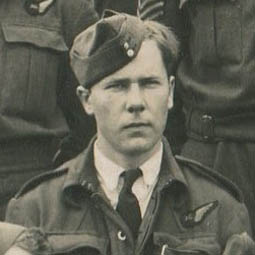 Henry Earl O’Brien, known as Harry, was born in Regina, Saskatchewan, Canada on 15 August 1922. He volunteered for the RCAF soon after he turned 18, and was selected for gunnery training. On arriving in the UK and further training, he crewed up with Les Knight and the rest of his colleagues, and they were all posted to 50 Squadron at the same time. He flew on 23 operations with Knight between September 1942 and March 1943.

Like his colleagues, O’Brien hugely admired his pilot. Knight was ‘the coolest and quickest thinking person I have ever met. And, in my opinion, the most knowledgeable person on the squadron with respect to his job.’

O’Brien weighed about 210lb, and was too big for the harness to which his parachute should have been clipped while he was in his turret. According to Fred Sutherland, his fellow Canadian, the pair had a reputation for being the sloppiest guys on the squadron. In fact, they were actually very disciplined and never reported unfit for duty.

On the Dams Raid, jammed into his position in AJ-N’s rear turret, O’Brien noticed how bright the moonlight made the landscape, and could see farmhouses, rivers, canals and even individual people on the ground.

By the time they got to the Eder, the crews were aware of its extreme difficulty and the fact that the dawn was not too far away. O’Brien was one of those who heard Henry Maudslay’s final words on the radio to Gibson, and noted that his voice sounded faint, unnatural and almost dehumanised. This made him quite nervous during the run in towards the dam that the mine, when dropped, might explode under the aircraft like it had done for Maudslay.

However it didn’t. It bounced perfectly, a testament to Knight’s skill at lining up the tricky approach. To his joy O’Brien had what he described as a ‘front centre’ view of the dam’s destruction: ‘our aircraft was standing on its tail for the climb out… Simultaneously the dam broke and a column of water rose vertically behind us.’ It was a feeling of exquisite pleasure that they had broken the dam, he recalled.

There was one almost fatal moment to come on the way home. As they crossed the Dutch wall defences, Knight came within a few feet of hitting a giant concrete block, but it was only O’Brien who saw just how close they got to it.

Four months later, on their final flight together, O’Brien was one of the two crew members who were captured after baling out over Holland. He spent the rest of the war as a PoW, and returned to Canada after his release.

Harry O’Brien and his wife Marlene had eight children, the first of whom was called Leslie in honour of his pilot, Les Knight. He died on 14 September 1985 in Edmonton, Alberta.

Further information about Harry O’Brien and the other 132 men who flew on the Dams Raid can be found in my book The Complete Dambusters, published by History Press in 2018.