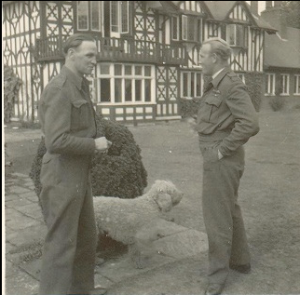 Dambusters Len Sumpter (left) and Joe McCarthy (right), outside the Petwood Hotel, Woodhall Spa. Probably taken early in 1944.  The Petwood was then in use as the Officers Mess for squadrons based at RAF Woodhall Spa. Pic: Leonard Cheshire Disability Archive

Leonard Joseph Sumpter was born in Kettering, Northamptonshire, on 20 September 1911, the son of Joseph and Mary Ann Sumpter. He had already served two stints in the Grenadier Guards before transferring to the RAF in 1941. He had joined the army as a boy soldier in 1928 and left again in 1931. He rejoined his old regiment at the outbreak of war but then in 1941 he persuaded his superiors to let him transfer to the RAF. After training in England and Canada, he was posted to 57 Squadron at Scampton in September 1942 and flew as the bomb aimer on thirteen operations with Flt Lt G.W. Curry. Curry was then grounded with ear trouble, and his crew were told they had to break up.

However, he and his colleague, flight engineer Bob Henderson, heard a rumour that a new squadron was being formed elsewhere at Scampton, and went looking for David Shannon, who was apparently on the lookout for a bomb aimer and an engineer. They both impressed the young pilot, and joined his crew.

After the Dams Raid, for which he received the DFM for his accurate attack on the Eder Dam, Sumpter continued flying in Shannon’s crew, as 617 Squadron undertook a series of operations. He was commissioned in June 1943.

In 1944 Mosquitoes were introduced into 617 Squadron to mark targets, and Sumpter became Shannon’s observer. He received the DFC in June 1944. Shannon was finally taken off operations, but Sumpter reverted to Lancasters for a short time as part of Flt Lt I.M. Marshall’s crew. Altogether, by the end of the war he had flown thirty-five operations. He flew on 617 Squadron’s last wartime operation, an attack on Berchtesgarten on 25 April 1943.

He was demobbed from the RAF after the war, but rejoined in 1946 in the Physical Fitness branch, and served until 1950. He had a son, Leonard, with his first wife Marjorie MacLean whom he had met in Prince Edward Island in Canada while training, and a daughter, Jacqueline, with his second wife Hilda Rose, who was from England.

After the war, Sumpter was a regular participant in 617 Squadron reunions and activities, and his audio recollections at the Imperial War Museum have been regularly trawled by historians. He was generous with his time to many people, as this extract from a letter sent to a schoolboy in the 1970s shown below demonstrates.

Len Sumpter died on 30 November 1993 in Luton, a few months after his skipper.

Further information about Len Sumpter and the other 132 men who flew on the Dams Raid can be found in my book The Complete Dambusters, published by History Press in 2018.

One thought on “Dambuster of the Day No. 40: Leonard Sumpter”