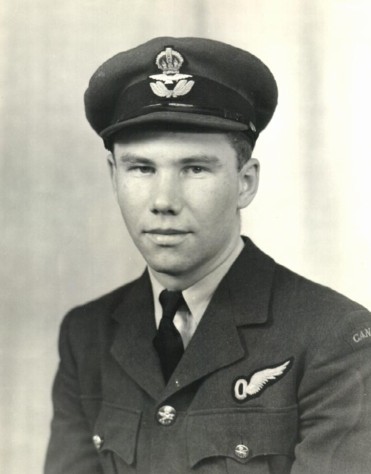 Harlo Torger Taerum was born in Milo, Alberta on 22 May 1920, the oldest son of the four children of Guttorn and Hilda Taerum. His father was Norwegian, and had emigrated to Canada as a young man. He died in a drowning accident when Harlo was 10.
Despite this tragedy, Harlo was a brilliant student at school. Soon after he left the war started. When he heard how his father’s people were being treated in their homeland by the invading Germans, he joined the RCAF. After training in both Canada and Britain, he began operational service with 50 Squadron in January 1942, at first flying on Hampdens, but then moving onto Manchesters and finally Lancasters.
By the end of the year he had completed a full tour of operations and was assigned to the squadron’s conversion unit as an instructor. But he continued to fly on operations, including two to Berlin with pilot Mick Martin. It may have been Martin who mentioned both him and bomb aimer Fred Spafford to Guy Gibson at the time of the formation of 617 Squadron, and the pair were quickly slotted into the CO’s crew.
Nicknamed Terry, he got on well with Gibson who regarded him as ‘one of the most efficient navigators in the squadron’ and he received the DFC for his work on the raid. The squadron received huge public attention, and Taerum became one of its stars, making speeches at the Avro factory and Wings for Victory events. ‘Can you imagine me giving a speech? We were just about mobbed for autographs afterward,’ he wrote to his mother. When Gibson left the squadron and went to North America on his speaking tour, he met Harlo’s mother in Calgary. In front of the press, he praised the work her son had done on the raid. The local press went ecstatic, with headlines reading ‘Terry Got Dam Busters to the Job W/C Gibson Tells His Mother Here and ‘Modest Dam Buster Hero Gets Enthusiastic Welcome. Gibson’s modesty was noted as he: ‘spoke little of the escapades which won for him the VC, DSO and Bar, and DFC and Bar. Rather, this young airman, probably the most famous hero yet to emerge from the present war, led the conversation to the splendid job Canadian fliers are doing and to his, “great pal,” Flying Officer Harlo “Terry” Taerum DFC, of Calgary.’
A few days later Gibson spent several hours at the Taerum residence. Mrs Taerum showed him a treasured album with letters and photographs about Harlo, and had it autographed. She summed up her experience by saying that it was one of the proudest and happiest times of her life.
Four days later a telegram arrived. Taerum was one of four of Gibson’s Dams Raid crew who had flown with the new squadron CO, George Holden, on a disastrous raid on the Dortmund Ems canal on 16 September 1943. Five of the eight 617 Squadron crews were shot down, and thirty-three lives were lost. Taerum is buried in Reichswald Forest Cemetery.
In a tragic postscript for the Taerum family, Harlo’s brother Lorne, a gunner just 18 years old, was also killed while serving in the RCAF. His Lancaster was shot down by a fighter on his very first operation in February 1945. The Taerums were one of the three families who lost a son who took part in the Dams Raid and another son serving elsewhere in Bomber Command during the war.

Decoration awarded for Operation Chastise: DFC
KIA 16 September 1943
Rank and decorations as of 16 May 1943.

Sources:
Richard Morris, Guy Gibson, Penguin 1995
John Sweetman, The Dambusters Raid, Cassell 2002
The information above has been taken from the books and online sources listed and other online material. Apologies for any errors or omissions. Please add any corrections or links to further information in the comments section below.

Further information about Harlo Taerum and the other 132 men who flew on the Dams Raid can be found in my book The Complete Dambusters, published by History Press in 2018.

One thought on “Dambuster of the Day No. 3: Harlo Taerum”