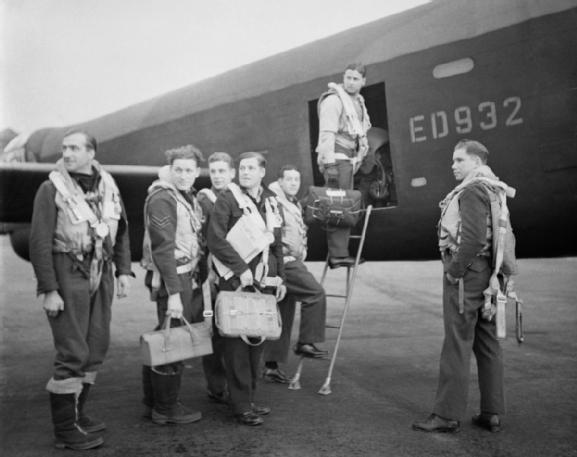 Only one of Guy Gibson’s previous crew from 106 Squadron came with him when he set up the new 617 Squadron in March 1943. This was wireless operator Robert Hutchison. Mick Martin is thought to have recommended navigator Harlo Taerum, who in turn recommended bomb aimer Fred (Spam) Spafford. These three, along with rear gunner Richard Trevor Roper, were all in 50 Squadron when the call came.
John Pulford was born on 24 December 1919 in Sculcoates, a district of Hull, the second of the four children of George and Ada Pulford. He went to St Paul’s school, a local elementary school. He became a motor mechanic and joined the RAF a month before the outbreak of war as ground crew. Like many other ground crew, he volunteered for retraining as a flight engineer in 1942, when the senior authorities in Bomber Command decided to create this new category for heavy bomber aircrew, rather than use a qualified second pilot. His brother Thomas was also a flight engineer.
By December 1942, Pulford had joined 97 Squadron, based at Coningsby. He flew on 13 operations with Sqn Ldr E F Nind between December 1942 and March 1943. On 4 April, he was posted to Scampton, and assigned to Gibson’s crew. Gibson’s logbook actually records Pulford as flying with him on 1 April, but this must be bad record-keeping on the CO’s part.
Pulford’s father George died on 7 May 1943, and the funeral was fixed for Sunday 16 May. Pulford was given special permission to attend the funeral, but he was escorted throughout by two RAF policemen in order to ensure he didn’t let something slip about the planned operation. It is not clear whether he returned to Scampton in time for the all-crew briefing which took place at 1800 that day.
Despite the fact that they sat side by side throughout their Dams Raid training and on the operation itself, Gibson seems never to have noticed much about Pulford. In Enemy Coast Ahead he describes him as a Londoner, obviously unable to spot his Yorkshire accent. But he relied on the Hull man to operate the throttles as they hurtled towards the Möhne Dam at 240 mph, calling out the famous words ‘Stand by to pull me out of the seat if I get hit.’
All of Gibson’s crew were decorated for their collective actions on the Dams Raid, and John Pulford was awarded the DFM. However, he was sick at the time of the original investiture at Buckingham Palace on 22 June 1943, and collected his medal later in the year. Earlier, he had been home on leave and one night went out for a drink with his brother Thomas, also serving in the RAF. Both men were in civilian clothes and at some point in the evening someone put white feathers in their pockets.
In the run up to Gibson leaving 617 Squadron in the summer, five of his crew – including Pulford – were allocated to the new CO, George Holden. Pulford flew with Holden on his first operation with the squadron, a trip to bomb the Italian power station at Acqua Scrivia on 15 July. The detachment flew on to RAF Blida in Algeria. On the return trip nine days later, where bombs were dropped on Livorno, he had swapped to the crew of Ken Brown. The reason why isn’t clear. Pulford didn’t fly with Holden again, and the CO then recruited the flight engineer from Bill Townsend’s crew, Dennis Powell. Holden, Powell and the remaining four members of the Gibson crew were all killed in the disastrous Dortmund Ems canal operation on 16 September 1943.
By December, Pulford was in another crew, piloted by Sqn Ldr Bill Suggitt, and completed several more operations. On 12 February 1944, Suggitt’s crew bombed the Antheor viaduct in southern France. They had used Ford airfield in Sussex as a staging post and successfully landed there in the early hours of the next day. Then in the short hop home from Ford to Woodhall Spa, they crashed into a hill on the Sussex Downs, near the village of Upwaltham. In 2009, a memorial to this crew and another who died in the area during the war was opened in the local church.
John Pulford is buried in Hull, in a plot next to his father.

Decoration awarded for Operation Chastise: DFM
KIA 13 February 1944
Rank and decorations as of 16 May 1943.

Sources:
Richard Morris, Guy Gibson, Penguin 1995
John Sweetman, The Dambusters Raid, Cassel 2002
Alan Cooper, The Men who Breached the Dams, Airlife, 2002
The information above has been taken from the books listed and a number of online sources. Apologies for any errors or omissions. Please add any corrections or links to further material in the comments section below.

Thanks to Malcolm Bellamy for help with this article.

Further information about John Pulford and the other 132 men who flew on the Dams Raid can be found in my book The Complete Dambusters, published by History Press in 2018.

One thought on “Dambuster of the Day No. 2: John Pulford”