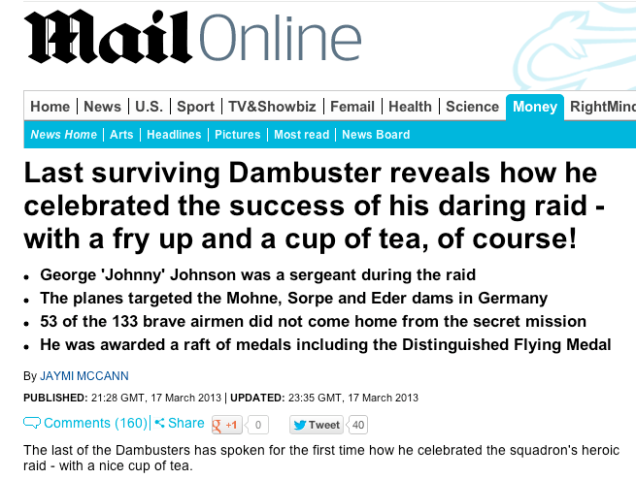 Another example, this time from the Daily Mail.

The last of the Dambusters has spoken for the first time how he celebrated the squadron’s heroic raid – with a nice cup of tea.

I’m happy to say that there are three Dambusters still with us: George ‘Johnny’ Johnson in England, Les Munro in New Zealand and Fred Sutherland in Canada. George Johnson has told his story a number of times.

Almost 70 years after the night-time bombing attacks, Squadron Leader George ‘Johnny’ Johnson, 91, told of the daring raid over occupied territory that dealt a decisive blow that crippled the Nazi war effort.
George was festooned with a raft of medals including a Distinguished Flying Medal for his part in 617 Squadron’s daring 1943 blitz on the Nazi-controlled dams along the Ruhr Valley in Germany, destroying their hydro-electric source of power.

George’s ‘raft of medals’ are for his war service as a whole. He was awarded the DFM for his part in the attack on the Sorpe Dam. It did occasionally happen that an airman got more than one decoration for an operation, but it was very rare (see comment below).

Widower George, who lives in Bristol, was a sergeant at the time of the raids, conducted under the name Operation Chastise, which smashed the Mohne, Sorpe and Eder dams.
He said: ‘We were about half an hour late because our plane had a hydraulic leak and we had to swap.

The Sorpe Dam was attacked, but remained intact. It was not ‘smashed’.

‘We took off at 22.01, and flew in over Sorpe dam in brilliant moonlight. We had to get the aim right – we went in six or seven times and I’d shout ‘Dummy Run’.
‘It was a totally different dam from the other dams. It was impossible to fly low over, so it had to be a drop, not a spinning bomb.’
Piloted by Joe McCarthy, the plane nicknamed ‘T for Tommy’ was one of five planes that made it to the dam, which was the most difficult of the three targets to crack.

Only two aircraft bombed the Sorpe Dam (see comment below). T for Tommy was not a nickname for the aircraft piloted by Joe McCarthy. It was its call sign.

It took bombardier George and his crew nine attempts to fly at a perilous 30ft, before the bomb, codenamed Upkeep, was finally loosed, seconds before they had to pull up to avoid smashing into the hillside behind the dam.

Bombardier is an American term for what the RAF called ‘air bombers’ early in the war. By 1943 they were usually referred to as ‘bomb aimers’.

He said: ‘I could see where to drop and shouted ‘Bomb Gone’ to cheers of ‘Thank Christ’ from the crew who were yelling for me to get the bomb out.
‘At 00.46 on May 17 we dropped our bomb with 8,500lb of explosives.’
George added: ‘There was a spout of water 1,000ft high. We circled and the dam crumbled about 10 yards wide.
‘But it didn’t seem as if the other five aircraft had been there. We needed six bombs to crack the dam and the water would do the rest.’
After smashing the dam, the heroic airmen flew their Lancaster bomber over the Mohne Dam, which had been blown by another plane in the same daring raid.
The Sorpe dam was badly damaged by the daring night-time raid, orchestrated by wing commander Guy Gibson and bouncing bomb inventor Barnes Wallace.

Some confusion in the last two paragraphs here. Was the dam ‘smashed’ or ‘badly damaged’? Oh, and it’s Barnes Wallis, not Wallace.

George said: ‘I will never forget the sight. It was like an inland sea with all that water overflowing.
‘It gave us a lot of satisfaction when we heard over the radio that the Eder had been breached as well.’
It was only when they flew back to RAF Scrapton in Lincolnshire that the brave crew realised they had been hit several times by an armoured train on their way to the dams, and the pilot’s chair was pockmarked with bullet holes.

He said: ‘I was tired and exhausted – I went to the mess and had bacon and powdered scrambled egg and a cup of tea. It tasted good.’
The five-hour raid came at a heavy price – 53 of the 133 brave airmen, hand-picked for the secret mission, did not come home.
George said: ‘The waitresses in the sergeants’ mess were all in tears as so many places were empty.’
The brave airman married sweetheart Gwyn, a phone operator in the Women’s Royal Air Force, days before the sortie, after being given special permission from chiefs despite all leave being cancelled.
After narrowly avoiding death on an eye-watering 50 missions during his 22 years’ service with the RAF, George became a teacher.

Did the Second World War really last 22 years? George’s ‘eye-watering 50 missions’ were of course confined to his war time service between 1940 and 1945. He stayed on in the RAF until 1962, and rose to the rank of Squadron Leader.

Great-grandfather George, who became a widower when Gwyn died of cancer in 2005, is helping Lord of the Rings filmmaker Peter Jackson with his scheduled remake of the classic 1955 Dam Busters film.
He said: ‘I feel honoured and proud to have been lucky enough to take part in that raid.
‘It proved to Hitler and the Germans what they thought was impregnable could be destroyed by the RAF.’