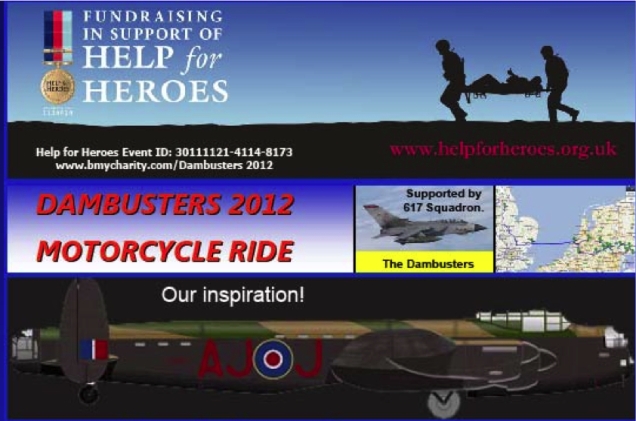 On the night of 16/17 May 2012 the 69th anniversary of the Dams Raid will be marked by a fundraising motorcycle ride for the Help for Heroes charity. The four riders will follow as closely as possible the route flown by 617 Squadron Lancaster AJ- J on the raid, from RAF Scampton to the Möhne Dam. They will then return to the UK via the John Frost Bridge, so famously held by the Paras at Arnhem, the ‘Bridge too Far’, arriving back in Scampton before midnight the same day.

The riders plan to lay a wreath at the Möhne Dam at 0019 on 17 May, the exact time and day of the bombing run of  the Lancaster piloted by David Maltby. As this blog has a personal connection to David Maltby and his crew, we are happy to support their efforts.

The riders are a group of four, led by Simon Dufton. If you would like to support this cause, you can go to the donations page set up by Simon and his colleagues.