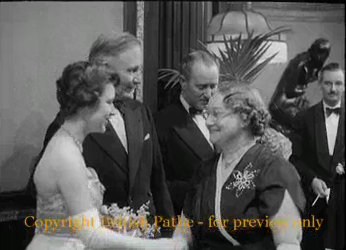 The British Pathe archive site now has an eight minute film clip about the Dam Busters. The first section shows 1943  newsreel of the King and Queen’s visit to Scampton after the Dams Raid and the later investiture at Buckingham Palace. This has been around for a while and can be found on Youtube and other sites. Less well known is the second part of the film, a long sequence showing scenes from the premiere of The Dam Busters in 1955. Princess Margaret, “a radiant figure in the bright lights of Leicester Square”, is seen meeting a long queue of dignitaries amongst whom, most poignantly, are some mothers of aircrew who were killed on the Dams Raid. One of these is shown above. If anyone can identify her or any of the others, I would be glad to know.

I don’t seem to be able to embed the clip, but you can follow the link above.